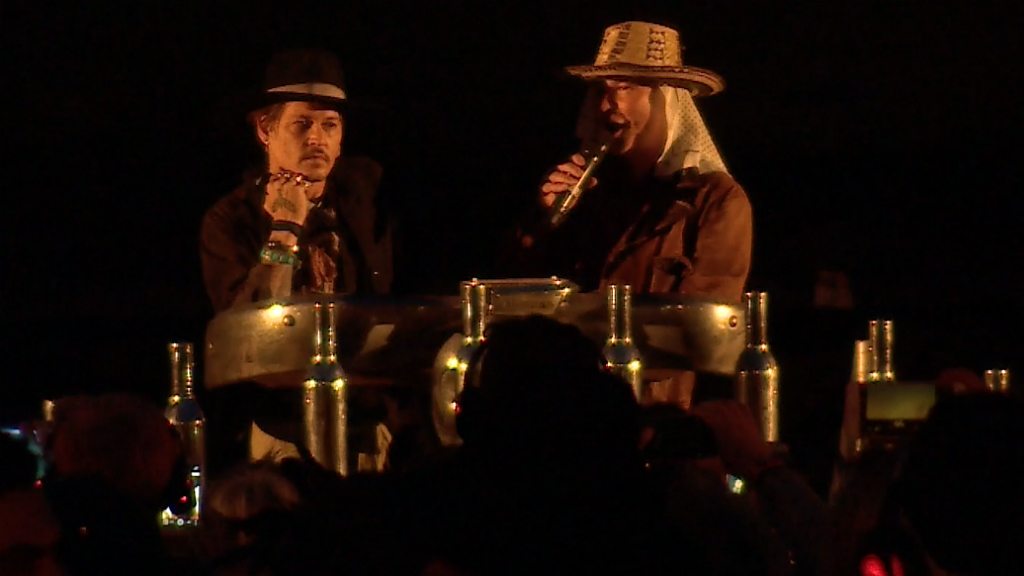 The actor says his remarks were in "poor taste" and did not "come out as intended".

Yeah. I call bullshit on that apology. He’s an actor. He knows exactly how it came out.

It was a response befitting the quality of criticism.
But I will be more explicit since a word to the wise is insufficient for the sanctimonious.

I was not criticizing Depp for “violent” rhetoric. I was criticising him for making a really stupid and narcissistic comment in public that served no purpose but to make himself feel good. And because it was in public it was counterproductive to whatever cause he claims to be supporting. Hence the “with friends like these” lead in to my post.

Do not misrepresent what I said, use that to falsely accuse me of hypocrisy and then expect me to “laugh at myself” about it.

But I will be more explicit since a word to the wise is insufficient for the sanctimonious.

Maybe have a laugh with me at the ironic thing you said, and move on? Shine on you crazy diamond!

Yeah. I call bullshit on that apology. He’s an actor. He knows exactly how it came out.

I don’t believe it was meant in earnest.

Yeah. Such apology. Much regret.

“Let me make it perfectly clear, I have never projected hate,” Nugent insisted. “When I said that about sucking on my machine gun, that was a direct response to the liberal Democrats — Obama and Clinton, et al — [trying] to ban certain types of firearms, violating their oath to the Constitution and the Second Amendment.”
“That was a metaphor and nobody is too stupid not to know that,” he continued. “The left is so dishonest that they misrepresented that, and make it perfectly clear with my Fox & Friends, I have never threatened anybody. I have never hinted at violence.”
According to Nugent, the “Detroit street slang” he used came during “adrenaline-charged rock and roll performances”

Of course Trump is sad! He probably assumed Depp was on his side after watching Cry Baby thinking it was an endorsement of the Confederacy.

Honestly, Trump could easily be a character in a John Waters film.

Yeah. He’s a shitbag. Eh. We each have our karma I suppose.

Please let this go and stop with the dismissive personal comments. I didn’t get your ego involved, I think maybe you have?

Holy shit. Crazy uncle Ted got less crazy. There is hope in the world.

“If [Clinton] gets to pick her judges, nothing you can do, folks,” Mr. Trump said, as the crowd began to boo. He quickly added: “Although the Second Amendment people — maybe there is, I don’t know.”

Nothing violent or wrong with suggesting that gun fans do something about Hillary, eh?

Don’t say this shit. But if do say this shit, better be famous enough to get away with saying it. The secret service will investigate for five minutes, issue an official warning to Depp, and then shuffle along like nothing happen. Someone with less privilege would be prosecuted for the class E felony they committed and face up to five years in the slammer.

We need more art colleges, everywhere. And they should admit everybody that shows up, just to be on the safe side.

I was criticizing him for making a really stupid and narcissistic comment in public that served no purpose but to make himself feel good.

Yeah, I just hate people who do that, don’t you??

your criticism was stated quite differently on your first pass. Please allow me a minute or two to adapt to the new goalposts?

Remember all the crap the Dixie Chicks got into for one little off-the-cuff remark?

I find relief in these troubled times in the thought that much of this is not necessarily new.

Remember all the crap the Dixie Chicks got into for one little off-the-cuff remark?

I remember them laughing at it, and the people moralizing at them for their lack of jingoism.

Let’s please avoid the personal remarks here. Unless you have first hand experience with what the Secret service will act on, it’s all just opinions - debate those, not the people behind them.

Every time I read about Johnny Depp these days, I think of this Scroobius Pip song. Seems especially appropriate this time.