I hope Stewart keeps this shit up. He seems to be one of the few high profile folks that are doing the job that major journalists SHOULD be doing… he’s a fucking comedian… so is John Oliver…

If only American corporate media interviewers had the guts to call a lie a lie like this.

I know lots of people are averse to celebrities entering politics, but I would totally get behind Stewart running for office.
He’s smart, he’s informed, well-spoken, and gutsy. He has morals. And he’s proven he can show up and work.
IMO, he’s demonstrated far more of the skills I want in a politician than get displayed during debates.

This would have been an absolutely devastating takedown of Brnovich if MAGA folks could be swayed by facts and logic.

Ima gonna have to get Apple TV but how long before these idiots realize they ain’t smarter than Jon Stewart and quit agreeing to be interviewed.

if MAGA folks could be swayed by facts and logic.

Or, you know, even begin to acknowledge that such things might exist in the first place…

Totally…
One of the most depressing graphics that makes me fear for the future…from fivethirtyeight.com…Vast majority of republicans think education is a dangerous, useless, propaganda factory. 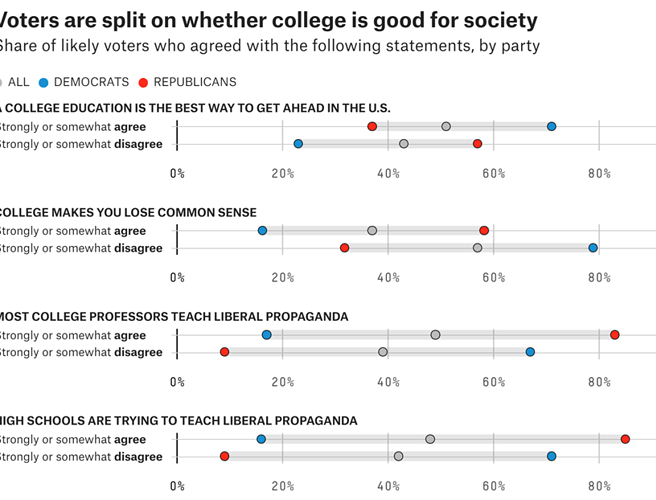 I get to hear about that in my own family. My mother went to college, my Trump-supporting uncle did not. He’s always pissing her off by claiming that she was “as conservative as the rest of them before she went off to college and got brainwashed.” She tries to explain that their reactionary father literally threatened to kick her out of the house if she expressed a dissenting political opinion, so of course she only felt free to express herself once she was in college and had moved out…

This has been a dogmatic position for the GOP for some time now, as they became increasingly divorced from reality. GOP positions on things were being contradicted by the people who actually studied those subjects, which could only mean one thing: getting an education resulted in liberal brainwashing. No one who actually knows what they’re talking about can be trusted, a very convenient position when you want to live in a fantasy land.