Judge: Paul Manafort must keep his ankle monitor on

Yes, your honor, I have three passports, millions of dollars in dirty money stashed all over the place, and dirt on the most powerful men in the world, but I’m not a flight risk, honest.

Criminal enterprise, yes. Installed by a hostile foreign government? No. They were elected. I realize that ‘evasion of blame’ is the national sport, but 62,984,825 Americans voted these people in of their own free will.

Only two. The rest were installed by an unqualified real estate agent hired by the Kremlin.

I say we give em what they want. Let em take off the anklet and sit in jail instead.

Paul Manafort Chews Off Own Foot to Escape Country

I say we give em what they want. Let em take off the anklet and sit in jail instead.

I’d bet that if they let him remove the ankle monitor they could “camp the spawn point” and wait for him to violate his parole. The odds are pretty good that he would, IMHO. These guys just aren’t used to actually following the rules. That is, after all, how he got arrested in the first place.

If he thinks that’s an indignity - wait till he gets to prison.

Appointed, I think you’ll find, in the way cabinets always are in your particular country. Whatever it is Russia did—and it is unclear what it is though it is gratifying to see Americans suddenly and uncharacteristically united against any foreign tampering in elections—they didn’t send an armored division to plop Trump in the White House. He was voted in and appointed his cabinet according to the usual way these things are done.

And Trump is supremely qualified. He’s an American citizen, born in America, over 35, and elected by a majority of electors. That’s the qualification. “Clever,” “competent,” or even “literate” aren’t on the list.

He is the American president. With all that entails. Sucks, but there you go.

I saw this in an episode of Justified… 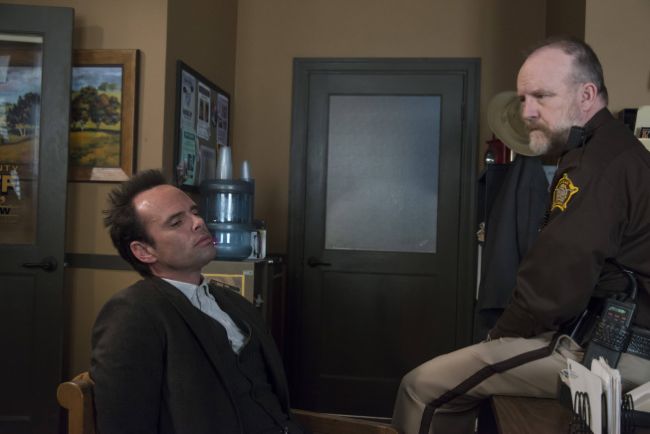 "Foot Chase" is the sixth episode of the fourth season, and the 45th episode in the series overall. It was written by Dave Andron and Ingrid Escajeda and directed by Peter Werner. It first aired on February 12, 2013. Raylan's discovery of a severed...

How could anyone mistake him for Jason Bourne?

I’m glad the court realized there’s no amount of collateral Manafort could put up to guarantee his own appearance, because Manafort doesn’t care about the money. He’d much rather flee to a country without extradition than he would like to keep a $3 million apartment, especially since he’s likely got spending money hidden in overseas accounts.

And for what it’s worth, many of the people who voted for those two feel like they are living in another country, hostile to us, and we both happen to share a continent.

I agree that the timeframe is too long. It looks like they are already using the “old and frail” section of the playbook to describe him. These guys love to portray themselves as virile and healthy until they are arrested. While awaiting their day in court, they have a tendency to suddenly fall ill and develop trouble walking/talking/remembering. During the legal proceedings, their supporters complain that they cannot possibly go to jail because they are too feeble. In the end, they get a slap on the wrist.

so much this. He’s on trial for MONEY LAUNDERING. I guarandamntee that he has sufficient funds to live comfortably on for the rest of his life in Brazil or some other country that won’t extradite him to the US.

He should be peeing in a cup at every possible opportunity as well.

If the ankle monitor is embarrassing, perhaps a GPS-enabled butt plug might be more to his liking.

I would think Manafort’s trial should not talk place before the rest of Mueller’s investigation happens. Manafort is not actually the most important person to charge, so there may be strategic reasons for Mueller to change who is being charged with what, or get more information out of Manafort in order to go after even bigger fish.