Kiddo's turn to geek out - took her to Midwest BronyCon. Met Dana Simpson of Pheobe and the Unicorn fame. Drew with her!

Ok - took the kiddo to a Brony Convention and spent all my money. This year they were very kid friendly. I got in for only $10! They give a free adult ticket with a kid ticket. Nice.

We went to the Voice Actors panel. The direct had Tom Waits shirt on. Nice. They did basically a whole episode right there for us (I think it was a fan fiction by St. Germain).

Here is her loot.

Signatures of Voice Actors:
Nicole Oliver who does Princess Celestia, Tree Hugger, and Cheri Lee. She gave my kid a free mini comic.

Ashleigh Ball who does Applejack, and my kid’s hero, Rainbow Dash.

And we got a pic with her.

Tabitha St. Germain who plays Rarity, Princess Luna, Muffins/Derpy, and who should be teaching kids theatre in a school some where with her infectious energy. She gave my kid an extra print, and an actual MLP toy/action figure.

Pinky Pie as a Stormtrooper. Her Party Cannon couldn’t hit the broadside of a barn.

Prototype MLP VR game. The googly eyes on a $600 Occulus Rift set up is genius.

Artwork:
We went to the Foal area and they had stencils to make your own pony. So I made Sashca from KMFDM.

Mashup of MLP and Steven Universe

At the Foal Area, there were not a lot of kids there, and Dana Simpson was going to do a “Unicorn Session”. She thought about reading from her book - Pheobe and the Unicorn, but also suggested she could draw. Me and my kid were the only ones paying a lot of attention, so we said we would love to learn how to draw her characters. So we basically got a one on one drawing lesson in drawing Marigold and Pheobe. I will have to take pics of my and my kids work later.

FYI - @doctorow did the forward for the 3rd book, Unicorns vs Goblins. 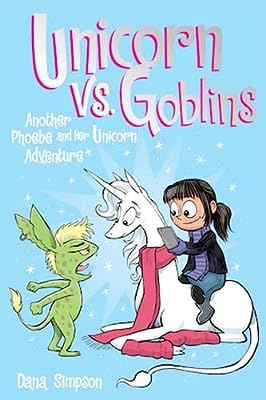 Not every kid skips a rock across a pond and winds up with a unicorn best friend, right? The popular friendship of Phoebe and Her Unicorn is back for a third collection of adventures so heavenly they ...

Looks like you both had a blast! My daughter, circa 2013 would totally be jealous!

You should totally send a copy of that KMFDM pony to Sascha K!

I posted it on a KMFDM group on Facebook and he was tagged.

(You can wash my mouth out with soap later)

I wasn’t asking, it was a directive.

OK, but I charge extra…

This topic was automatically closed after 263 days. New replies are no longer allowed.