I might be wrong, but if what I just read is correct, those 4 years “in jail” are suspended years which means that he’ll be out on probation for the vast majority of those years and he’ll have an additional 3 years of “supervision” which sounds like a light version of probation.

But on to the bigger picture, most of us do have a basic need for “fairness” or at least what we perceive as “fairness”, and that demands that if you do something bad, something bad must happen to you, a punishment, but I don’t know how much it actually serves society with the current prison system, and I grant you, I haven’t come up with a decent alternative. The modern concept of the Penitentiary, is that the criminal will not just be separated from the society to whom he poses a threat, but he will be reformed through “Repentance” and when they are allowed back into society, they will be better able to integrate into it without being as much of a threat.

So let’s suppose he serves the 4 years in prison; well, that serves the purpose of separating him from our society for that period of time, but will he “Repent,” will he be reformed? Integrating into the society of the prison, pretty much means joining a gang, and he’s got a leg up with the Nazi and White Power circles, himself being a local KLAN leader. So what do you think will happen?

My understanding is that he was given 8 years, with 4 years suspended.

This means that he is on the hook for serving 4 of those 8 years. If he stays clean, and fulfills the terms of his supervision after release. Time served. If he misbehaves at any time (even after the initial 4+3 years), he will have to serve those additional (suspended) 4 years, in addition to any new charges.

So let’s suppose he serves the 4 years in prison; well, that serves the purpose of separating him from our society for that period of time, but will he “Repent,” will he be reformed ? Integrating into the society of the prison, pretty much means joining a gang, and he’s got a leg up with the Nazi and White Power circles, himself being a local KLAN leader. So what do you think will happen?

Yeah, this is exactly why many people advocate for the total abolition of prisons. Most agree that there are some individuals who can probably never freely be a part of society, but for the vast majority, prisons don’t seem to be helping the greater good. I’m not sure where I come down on it (obviously they are monstrous in their current form).

Like you said though, there’s another aspect to prisons that is less talked about, but that I think is a deeply held part of how our society deals with crime… Despite what we might say, prisons are to some degree about punishment… not so much to reform the guilty, but to satisfy the emotions of society-at-large. People want to feel like some kind of retribution has been brought to bear, that some price has been paid for wrong-doing.

This is a very “base” instinct and one that philosophers have grappled with since the enlightenment… And in contemporary times, as we continually find out that we may have less free will than we once thought, the concept of punishment of wrong-doers seems… problematic… Just punishment is predicated on the notion that the person had the capacity to do the right thing, but chose otherwise.

If we were all good utilitarians, we’d come up with a system that produces the best societal outcomes, which might mean that people who do bad things get to “walk free” but are rehabilitated in some way… This sounds like the best thing for everyone, but alas, we’re more complicated than that… As a society and as individuals, it’s hard to let go of our darker emotions…

This makes me so angry, only 4 years.

i can guess which group he’ll be hanging out with in the prison yard.

Maybe time ‘Merkins’ stopped defaming that noble creature, the Ass and adopted the original ‘arse’ to go with these ‘holes’. https://www.etymonline.com/search?q=arse

1 year prison and and three years of supervised release. If you guys are going to insist on having laughably stupid gun laws, maybe you should demand propper sentences for people who misuse them?

Only 1 year and 3 supervised release.

One point that’s not getting mentioned a lot here is that the guy he was shooting at (or in the direction of, whatever) was at that time using an aerosol can as an improvised blowtorch/flamethrower/whatever, which led the gunman to claim he was shooting in defense of his fellow protestors. Guy with blowtorch claimed he was using it in defense against those protestors (and said the can had been thrown at him earlier in the day by the protestors).

And that is a perfect encapsulation of Amerikkka!

I live where he does, and he is, or was, a customer where I work. He is set in his racist ways, and will not be changed. A truly despicable person.

You appear to be right on the sentence. Looks like it’s 3 years supervision after release.

On the second point, all of that is mentioned in the linked article and is a pathetic excuse for the racist’s actions. The dude he shot at got charged with disorderly conduct, also pointed out in the article: https://www.fredericksburg.com/news/va_md_dc/corey-long-appeals-disorderly-conduct-conviction-related-to-flamethrower-sentence/article_a3bbf6f4-78bc-57cb-a367-9a978ad620ca.html

…and does this look like a proportional response to his “flamethrower”? 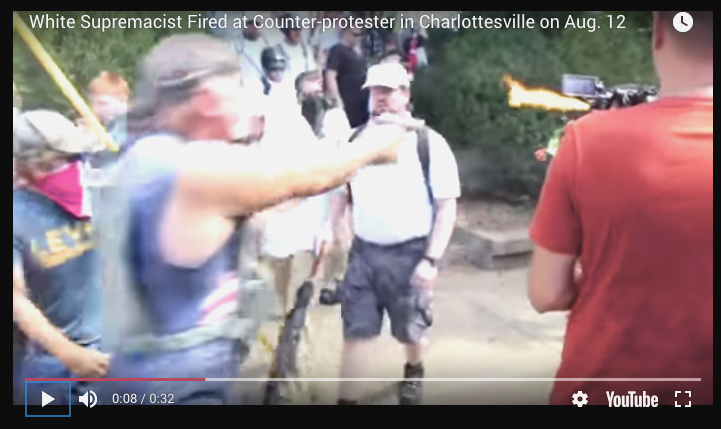