It was his problem right after he retired from TDS in 2015. I think he’s begun pulling back from that in recent years.

ETA: Got a real laugh from Burton’s reaction to “Southern ‘right to work’ states”.

Thank goodness! I have not been paying much attention because of that!

He’s not all the way there. He defended Chappelle’s SNL monologue supporting Kanye and he’s borderline JAQing off about whether or not Biden knew about and enabled his failson’s deals in Ukraine. But something “mysterious” happened between 2015 and now that tempered Stewart’s privilege-driven Bothsidesism.

I will give Stewart some credit for actually listening to his critics and not just being immediately dismissive, but he does have a few blind spots. His recent interview with former Secretaries of State Clinton and Rice is pretty indicative of the problem with the Problem With Jon Stewart.

LeVar is an amazing guy!

And I seem to be out of the loop - what’s the issue with Jon Stewart exactly? Have not watched his new show or followed anything he’s done since Daily Show.

Without getting too far down the rabbit hole, he has a tendency to “both sides” things.

The most high-profile example being this event: 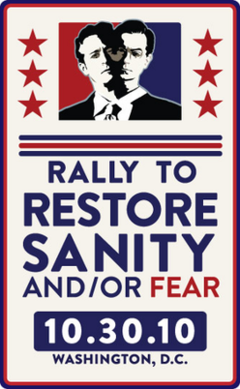 Rally to Restore Sanity and/or Fear

The Rally to Restore Sanity and/or Fear was a gathering that took place on October 30, 2010, at the National Mall in Washington, D.C. The rally was led by Jon Stewart, host of the satirical news program The Daily Show, and Stephen Colbert, in-character as a conservative political pundit, as on his program The Colbert Report, both then seen on Comedy Central. About 215,000 people attended the rally, according to aerial photography analysis by AirPhotosLive.com for CBS News. The rally was a com...

I spit my drink out over the Elvis bit. Bravo!

I see what you mean - but this event came across as to me more satire and comedy vs the whole ‘both sides’ thing.

I really don’t have a horse in this race as I find Stewart more self-righteous than funny - and given what Regressives are up to these days I welcome any countermeasures in any form. Including Jon Stewart and even Bill Maher (gulp).

Did he try to walk back his claims regarding the Chinese government being directly responsible for COVID? Seems a lot of people had legitimate beef about that.

I guess this is part of it. When I am not paying attention the stuff that broke through that I did hear was stuff like this or defending Dave Chappelle. Which made me uninterested in catching up on what he is up to

FWIW, I didn’t take it as defending Chapelle per se, but rather asking the question of how we engage people who offer differing opinions that are outside of the mainstream. Of course, he is blindered to two critical points:

This is where Stewart fails, IMO. It’s almost as if his own privilege bubble has kept him from recognizing fundamental realities and he feels the need to guide it back to a point of “reason” when, in reality that’s exactly what these peoples’ critics are trying to get them to engage with. But they don’t have to because they’re rich, have a dozen megaphones at their disposal and a population that laps up misdirection so they don’t have to have uncomfortable feels about their own complicity.

That may sound nit-picky, but I think it’s worth noting because it is, in itself a form of derailment. But I don’t get the sense that Stewart thinks that these are valid arguments, just that these people are owed discourse that they won’t even engage with.

BUT BACK TO LEVAR BURTON — anybody know if that book is real? I’ve searched for it and nothing comes up.

How has no one mentioned the FENCING? (Such as it is.)

(Where did he get that cool gymnasium sabre?)