These people are weird.

Weird - not really. They are clearly playing to trump’s base.

’ Even Marjorie Taylor Greene – the extremist congresswoman who has sparked outrage for, among other things, comparing coronavirus-related restrictions to the treatment of Jewish people during the Holocaust – chimed in from the right with criticism of Graham.’

Dear lord, when you’re considered too blood-thirsty for Marge…

Mind you, any tears she might have would be for Putin, not his victims.

Aww why not let Lind-say give it a go? “Here’s your official senate garrote Senator. When the red-light goes green jump! Don’t open your chute until you see the statue of Marshal Zhukov on red square or they’ll have you in the crosshairs for sure.”

I’m confused. So it sounds like Graham isn’t even on the side of the GQP here. What’s the angle of or benefit of this talk? Or is this just an (il)legitimate idiot talking too much?

That’s called free speech. You don’t like it? Do you live in Russia where you can’t say things like that?

But when you represent our government you should not be promoting things that can cause harm to US citizens here or abroad.

Will no one rid us of this meddlesome Putin?

end up like Alexander Litvinenko or Sergei and Yulia Skripal.

That would be too obviously Russian. Here in the States we use readily available gunpowder and lead. MTG (Q) has denounced Lindsey, so where do we think her reality-challenged base stands?

Maybe Mathias Rust would like to make another attempt, but with a bomb strapped to the belly of his plane. /s /s /s

These people are weird.

No, they are just showing us who they are, and what they believe in, which is extreme partisanship.

but is there anybody who actually disagrees with him?

It doesn’t matter, since it’s illegal. And there is no guarantee that taking out Putin would make the situation any better.

is not merely the result of the ire of a single mad authoritarian acting out power fantasies should disagree.

they are moves to gain from polarization that Putin created here,

Well, no, he did not create it, he merely egged it on and materially benefitted from it. The blame for creating the current hyper-partisanship lies squarely at the feet of the post-Reagan GOP.

That’s exactly what it is.

There is a lot more going on here than just Putin invading a sovereign nation. There are larger forces at work that are impacting many places, here in the US included.

A couple of shots in Putin’s head, preferably by one of his own, and this problem will resolve a lot faster.

That’s what people believed about Libya, Iraq, Afghanistan, etc. Why do you think that kind of regime change would go any better just because Russia is a larger and more powerful country with nukes?

A post was merged into an existing topic: Sunlight is the Best Disinfectant

What’s the angle of or benefit of this talk?

For some reason he thinks playing the tough guy to have some political benefit, despite the pro-Putin sentiment in the GQP. Maybe he’s trying to threat the needle - not advocating war (that Republicans are against, in this case), but also being sufficiently belligerent (which Republicans love).

Yes, I stand by my call to give Lindsey Graham an atomic wedgie. 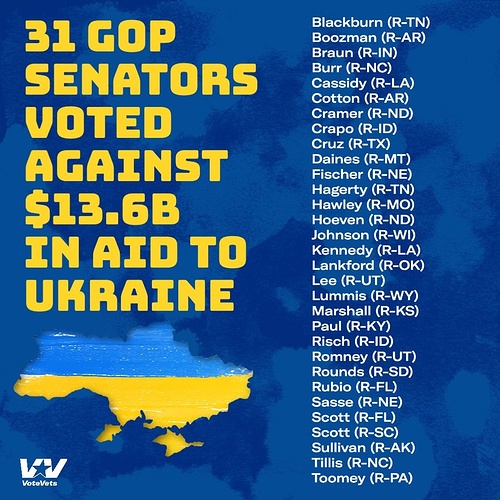 This is just Lindsey Graham trying to be the boneheaded tough guy that he thinks voters will respond to. He’s wildly overestimating his personal ability to pull it off, but he’s not wrong about what folks like.

Putin doesn’t seem like someone who gets confused by the difference between posturing and actions. He might be provoked by US posturing that hits his wallet or undermines his imperial maneuvers – that’s something to worry about – but he doesn’t know who Lindsey Graham is, or care about his sad vaudeville act.

I fully understand why political assassination talk is not a good thing for politicians to engage in. But dang I get what he’s saying. When you see the countless innocent people who are being killed, injured and displaced because of Putin’s ego. It’s pretty dang annoying that the actual single person responsible for the death and destruction of countless others the one who we have to tiptoe around. I’m not saying he should be killed. But I’d sure like to see him tried and convicted of his war crimes.

(I also think Graham is a tool but in this specific case I’m just saying I get the sentiment. Even if it’s not the right thing to say)

“shoot the dictator and prevent the war ? But the dictator is merely the tip of the whole festering boil of social pus from which dictators emerge; shoot one, and ther’ll be another one along in a minute. Shoot him too? why not shoot everyone and invade Poland? In fifty years’, thirty years’, ten years’ time the world will be very nearly back on its old course. History always has a great weight of inertia.”
― Terry Pratchett 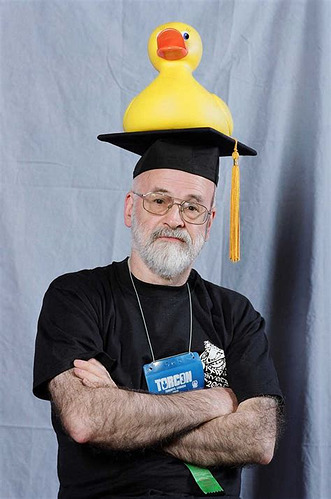 but he doesn’t know who Lindsey Graham is, or care about his sad vaudeville act.

Actually, he probably does know who graham and for that very reason couldn’t care less about what he says. Lindsey, honey, there are times it’s better for you to just stay in your closet.

It just shows how impotent and ignorable Graham is.

Even when Graham is openly calling for Putin’s assassination, it’s not enough to make Putin sit up from his Ukraine meal and notice him.

But the dictator is merely the tip of the whole festering boil of social pus from which dictators emerge;

That’s certainly one view of history.

However, the people who came after Stalin strove to be a lot less Stalin-like. In fact, the Politburo made sure the “next Stalin” (Lavrenty Beria, then-head of the NKVD/KGB ) never made it to the Iron Throne: Krushchev et al had him arrested, shot, and in the ground as soon as Stalin’s body got cold.