I do love my people.

I loved the attitude change when the pilot said his boss would be in touch with the boss of the little jerk on the ground.

Holy shit I would not want to be an air traffic controller. I’m sure god damned glad Reagan saw fit to break their union because doing this type of high stress level job can be done by any fucking monkey.

Do you know for a fact he was being a jerk? He is guiding a shit load of aircraft, he knows his airport better than the pilot. The pilot needs to listen to him.

Reminds me of this old joke 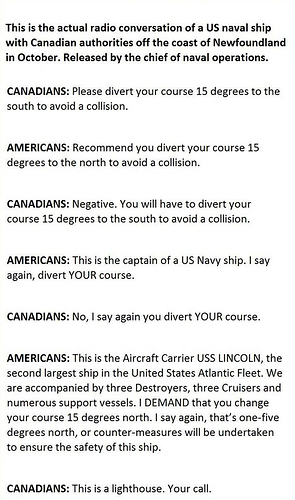 Old maritime legend describes an aircraft carrier that unknowingly attempted to bully a lighthouse into moving out of its way.

One of the best stories I heard, supposedly true, relates to an exchange between British and American navies during a joint exercise.

Holy shit I would not want to be an air traffic controller. I’m sure god damned glad Reagan saw fit to break their union because doing this type of high stress level job can be done by any fucking monkey.

“The strikers were often working-class men and women who had achieved suburban middle class lives as air traffic controllers without having gone to college. Many were veterans of the US armed forces where they had learned their skills; their union had backed Reagan in his election campaign. Nevertheless, Reagan refused to back down. Several strikers were jailed; the union was fined and eventually made bankrupt. Only about 800 got their jobs back when Clinton lifted the ban on rehiring those who had striked. Many of the strikers were forced into poverty as a result of being blacklisted for [U.S. government] employment.”[14]"

I guess that’s why it took three years to train their replacements - and they went with many people with the exact same military training.

“In the wake of the strike and mass firings, the FAA was faced with the task of hiring and training enough controllers to replace those that had been fired, a hard problem to fix as, at the time, it took three years in normal conditions to train a new controller.[2] They were replaced initially with non-participating controllers, supervisors, staff personnel, some non-rated personnel, and in some cases by controllers transferred temporarily from other facilities. Some military controllers were also used until replacements could be trained. The FAA had initially claimed that staffing levels would be restored within two years; however, it would take closer to ten years before the overall staffing levels returned to normal.[2]”

Thinking there was a missing snark tag from YL.

I heard recently that the poor kid playing Charlie had no idea that Wilder was going to start screaming at him. He was never given Wilder’s lines in his part of the script. Wilder was reportedly agonizing over doing the scene because he had become very chummy with the young actor. Charlie’s tearful response is totally real. The same podcast pointed out that none of the cast was allowed to meet Wilder until they were shooting the scene at the factory gate.

But generally the pilots have better weather information than the tower, and weather is a generally accepted reason for a PIC to deviate from ATC instructions. It might be the most common reason, actually. The PIC is also more knowledgeable about their own aircraft and what it can handle than the ATC is. It sounds like they both did the right thing in the end, but got unnecessarily snippy about it.

As the child of a pilot, who grew up listening to tower chatter… that’s a pretty remarkable exchange. 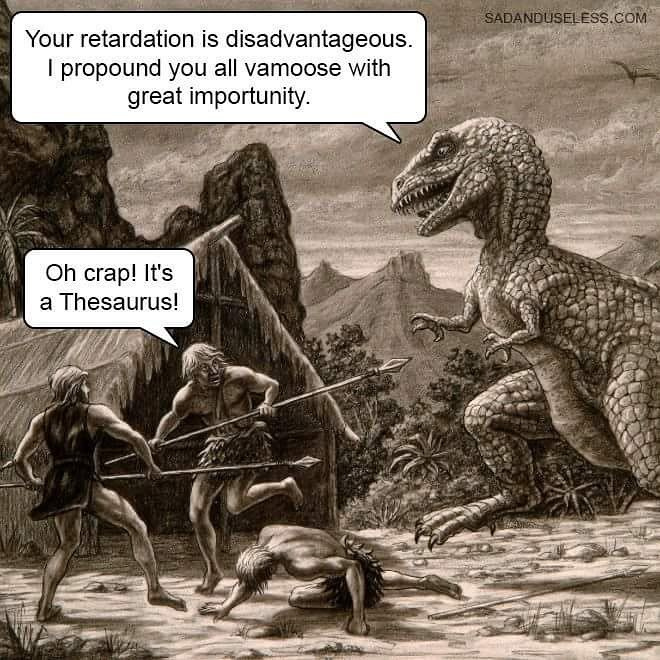 The controller is sitting in a room miles away, perfectly safe, reading about the weather from a screen. The pilot is looking at the weather and is responsible for nearly 300 lives, not to mention his own. Pilots understand the need for smooth traffic flow and deconfliction, so they follow ATC’s directions 99.9% of the time. When safety of flight is the issue, however, it is the pilot’s and only the pilot’s decision. Blaming the controller when your jet crashes is not an excuse anyone is going to buy.

Do you know for a fact he was being a jerk?

When he talked about ‘getting yourself into this’ AND when responded to the pilot after the pilot let him know his boss would talk to his boss about it, yes. That was highly unprofessional. Never heard the like of it, and I have listened to hundreds and hundreds of hours of this, live.

“Welcome to NY and JFK!”

I don’t know when that exchange took place, but I don’t think we’ve had anywhere close to the second biggest navy in the world for quite some time now. We’ve only got one aircraft carrier, and currently that only carries helicopters.

Honestly, I think what came across as a jerky controller talking down to the pilot was really was just a stressed out controller with east coast inflection. I’m not saying it’s okay, but I’ve run into this tone a lot in the tech sector up here in the North East. Pilot might have been better off making a joke with the guy, while still making the same point about his experience as a pilot, instead of threatening him.