Live in your very own haunted mental asylum

Live in your very own haunted mental asylum

So… you were eavesdropping as my ex departed after our divorce?

150k square feet, for the cost of a 2 bedroom in silicon valley.

Oh wow I’d love to live there until I died! And maybe even a bit afterwards…

HA HA HA! I go to one every Monday morning!

Wherever I lay my hat, that’s my haunted mental asylum.

Awwww man! I’ve been thinking of buying vs. renting, but this is just too far to commute. What a disappointment. I don’t suppose it’s a mobile haunted mental asylum, is it?

That would be awesome! Except that building can’t be haunted. Because, you know, spirits don’t actually exist and stuff. Darn that reality!

Well if it was haunted, the implications for Religion and Science would be huge.

Someone should turn it into a movie house with midnight screenings of Session 9. Not me, mind you, but someone.

Because, you know, spirits don’t actually exist and stuff. Darn that reality!

Sure they do, it’s called breathing! You know, such as inspiration and expiration. Those are spirits.

You can even be haunted by the breath of others.

Perfect for the kids

Worked here for over a decade as a supervisor

And yes, it’s reported as haunted ( The rat-maze of tunnels are loads of fun )

Use Google maps to poke around these sites as they are huge.

Have you had a TB test recently?

Have you had a TB test recently?

“TB or not TB, that is the question…”

I’ve got to check this week’s TB Guide to see what’s on.

Use Google maps to poke around these sites as they are huge.

I’ve poked around there in person! (For some reason I hadn’t brought a camera, and it was before cellphones had them at all.) 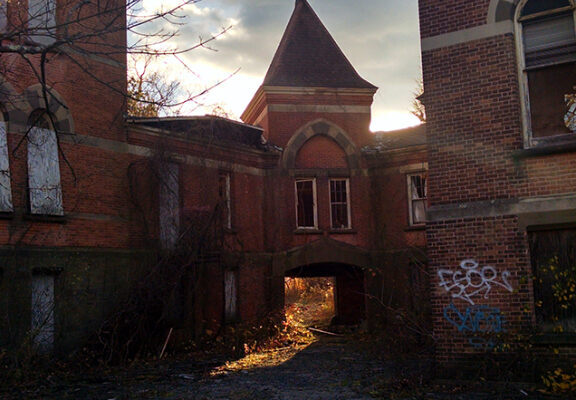 This mouldering abandoned mental hospital was once a center for progressive healing.

I heard they’ve upgraded security since some nitwit (not me!) started a fire that burnt part of it down.

That sucks, it’s a beautiful building.