Suddenly, this brings to mind those folks who looked down from their balcony at Occupy Wall Street and toasted them with champagne.

Please explain this poster and the significance of the backward flag.

Maybe this will help my case… 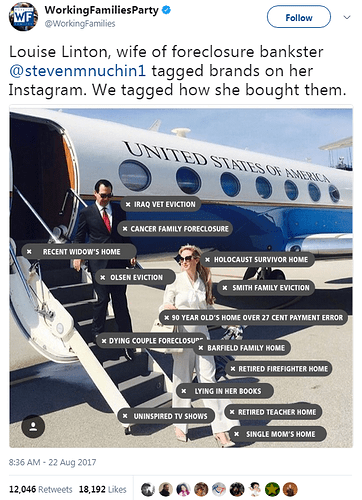 “First, that fez-and-vest combo is much too ‘third-century.’ ­
And these patches; what are we trying to say? Beggar? No. Let’s work with me here.”

I’m imagining how the courtship must have sounded to her…for example, the first date.

I’m imagining how the courtship must have sounded to her…for example, the first date.

Pretty much. The Goldman and “Forclosure King” money helped, too. The guy’s worth several hundred million. And is a crook. Sorry, job creator.
And I guess marrying the guy a month or so ago makes her a job creator, too, as upposed to a glorified house frau.

You had me at “Secretary of the Treasury.”

Nono i get that this person’s a scumbag. I’m more ‘what does backwards flag mean?’ I know upside down flag, but not backward.

Coincidentally, only just today I saw this, explaining why the US flag is backwards on uniforms and aircraft, but I don’t think this is it:

Learn Why the U.S. Flag Is Worn Backward on Army Uniforms

Learn why the flag is worn backward on Army uniforms, what it means and how this long-running tradition dates back to the Civil War.

Poor, in this case, means anybody unable to afford a private jet.

It’s weird, but the outfit just kinda looks like something my grandma would’ve worn (not the crazy heels), but her hair would be up in a perm with the scarf over it and she would have bought it all at Sears.

How is this the party of the white working class?

McSweeney’s was so much more compelling when it didn’t seem to be a gushing fountain of blackest humor. These days it seems like, “here’s a slightly exaggerated version of the latest political outrage, haha we’re so screwed”, over and over again. But I suppose that’s just the times we live in.

The swamp has been DRAINED!

“if the choice was yours” is the crux, isn’t it?