This and the previous trailer has me excited. I really like the old Mad Max movies. I have to say just the rich visuals and cinematography looks fantastic. Please just have at minimum a solid and believable story and I will throw money at you to go see it.

looks great. I hope the story matches the explosions.

The highest point of cinema: A car getting sucked up in a tornado and exploding.

If we were just talking about the first two, I would agree with you. Beyond Thunderdome was two weak movies glued together to make one even worse one - cinematography notwithstanding.

The first two were good though.

I have incredibly high hopes for this one, both because of the source, and because I really like Tom Hardy’s ability to make some unexpectedly great choices as an actor.

Fire/car/tornado aside, it looks like most of the action pieces are going to be focusing on actual, practical effects and pyrotechnics, and not a bunch of CGI.

Between this and the new Star Wars, could we finally be seeing a new era of blockbusters where not every single moment depends on a rendering farm and actors on a greenscreen?

Between this and the new Star Wars, could we finally be seeing a new era of blockbusters where not every single moment depends on a rendering farm and actors on a greenscreen?

I hope so. And this is coming from someone who loves CGI stuff. I think it’s used too much as a crutch now. Certainly some things look better rendered in CGI, and some things are more practical, but there is something to be said about a tangible prop. It certainly feels more real. Creature effects can be better too. I still contend the puppet Yoda is more real than the CGI one.

Here is a quote from George Miller back in July.

“Yeah, Mad Max is not a superhero. We don’t defy the laws of physics,
it’s not a fantasy film. It’s basically a western on wheels. And I think
if people see, I know when I see too much CG, that sort of takes me out
of the experience. You want to have that sort of almost, I’m not going
to say documentary experience, but you want to feel it like you’re
really immersed, like it’s really happening. So we decided to literally
do every car that’s smashed is smashed, every stunt is a real human
being, even the actors do a lot of their own stunts, and so on.”

So much orange and blue.

They’re filming in a desert. It was already orange and blue. Was it really necessary to dial it up to 11? It’s so over processed the fireballs look fake.

To be fair, trailers are notorious for not looking like the actual movie.

An excellent family movie, should have been released for Xmas:

You guys sure Mel Gibson isn’t in this? At 1:31 in the trailer, there’s a very quick cut to someone holding holding a flare in front of someone’s face. That face looks an awful lot like Mel Gibson under heavy makeup.

One of those vehicles is giving off a very The Cars that ate Paris vibe. I know that dangerous-cars is the MM2 & 3 & 4 aesthetic, but the spiky-beetle (or dune buggy?) seems a bit obvious: 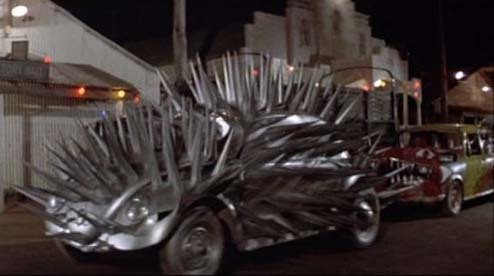 side-view, and we see that “super-spiky” is a theme on other vehicles, as well:

Fury Road screenshots from http://www.djfood.org/djfood/mad-max-fury-road-tralier-1, CtaP shot from an image-search. I now note that the screenshot source has somebody making the same observation in the comments.

I swear I saw this truck in a music video back in 91 or 92; I remember it as being “James Brown is Dead” but can’t find any video corroboration:

I was thinking the exact opposite. The first half of the trailer looked real, but the more Biblical scenes looked like way-over-the-top CG.
Then I see @akbar5656’s quote and see I’m wrong. (about the cars anyway).
Being a fan of the first two, I’ll give this one a look definitely.
I do enjoy a good apocalypse.

Just imagine where creature-effects and robotics would be now, if CG hadn’t jumped the queue.

Good sentiment, but somehow I doubt the dudes getting blown a hundred feet out of the tornado car explosion are real live stuntmen.

I doubt the dudes getting blown a hundred feet out of the tornado car explosion are real live stuntmen.

Not anymore, they’re not.

By the way, I want this guy’s gig: 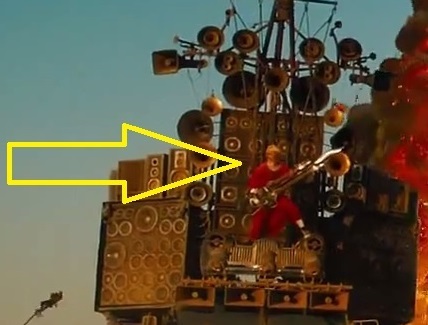 Or maybe to be one of these guys:

What strikes me as funny is that this trailer actually makes The Road Warrior seem, by comparison, to be a genuinely plausible and surprisingly realistic movie. That said, I am far more excited to see this than I am for the new Star Wars.

May can’t come soon enough. As I mentioned in the other thread about this trailer, I’ve already gotten my $12 worth of entertainment from this trailer and the Comic Con teaser. The rest of the movie could be Ed Asner reading the first four chapters of 1 Chronicles over and over while holding his nose, and it’d still be worth it.

No one claims that George went 100% practical with this. Just as much as he could he did.

This futuristic vision brought to you courtesy of your Friendly Neighborhood Patriarchal Tea Party!

(you can thank us later…)