MAGA Nazis proclaim their support for DeSantis and race war

There are more than enough real Nazis supporting the GOP that there’s really no point in the left sending out fake Nazi actors to make the GOP look bad.

In a halfway sane world, you’d see people like Desantis think twice about the things that they say and do if actual nazis are coming out to support them. But he won’t he’ll make vague attempts to deflect and double down on his hateful agenda.

Florida Law Enforcement: We have investigated ourselves and found no wrongdoing.
Pushaw: No…umm…that’s not what I was asking for…

Still manages to astonish (me) that a political party can embrace the utter worst of historical events and profit by it. (need a name for this truly ghastly social phase, and somehow trumpocracy doesn’t spread the blame about properly)

At some point they themselves become fascist because they lack the knowledge and awareness to stop themselves from crossing that line, and I worry that point is in the past now.

This is separate from the true believers, and the people who do know what the Nazis did, but don’t care that they are copying them because it is all just a game to them.

and I worry that point is in the past now.

May he lie in the ground and burn bagels.

I’m not. Its more like they know and want to be just like them. Only without the massive casualties, destroyed home and war crimes trials part. They want power and privilege.

Nah, they know, and they approve.

I base my beliefs on what happens when I tell people about Magnus Hirshfeld and what happened to him and the people he was supporting (including trans people, who did exist in the 1920s).

Their reactions tell me that there are at least three groups. People who didn’t know, people who don’t care, and people who try to argue that it never happened but that we deserved it if it did. 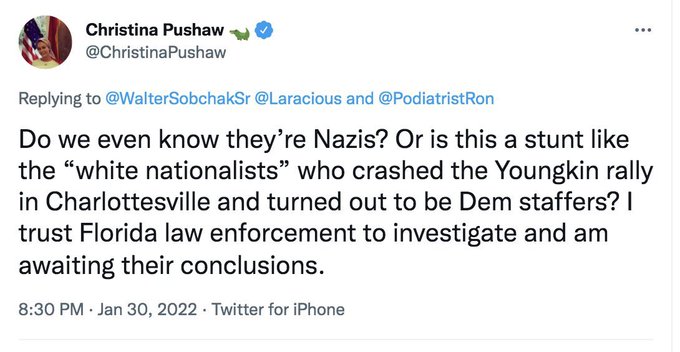 Oh FFS, everything with them is a conspiracy/false flag.

I guess the Lincoln Project did have people pose with tiki torches at a Youngkin rally, but this is completely different.

And let’s just say they were fake - why not condemn Nazis while you are at it? Nazis supporting your candidate is not a good look. Oh, NVM, you’re fascists and don’t want to alienate your base. Got it.

I guess the Lincoln Project did have people pose with tiki torches at a Youngkin rally, but this is completely different.

Yes, it was meant to be satirical to call out their white nationalist ties.

Oh, NVM, you’re fascists and don’t want to alienate your base. Got it.

I know back in the 80s, the schools I went to in suburban New England didn’t really cover the Nazis atrocities and WWII in general until high school, and even then only in generalities – they had too much history to teach in order to get us ready for the AP exams. I doubt the non-honors/AP/IB class even went that deep into such things, and I don’t know if more recent curriculums do more in-depth nowadays, but I do suspect that most people who have never really paid attention probably do have a twisted, mostly-Hollywood generated idea of what and who the Nazis were. Everyone knows that Jewish, gay, and gypsies went to the camps, not so much the Norwegian teachers, dissidents (assuming they weren’t just outright murdered), and how the fear of this happening to them kept a lot of the population in check. They remember Hogan’s Heroes, endless adventure and war movies where Nazis with English accents ever so civilly disagreed with the American accented protagonists, and nowadays games where the two classes of legitimate guilt-free targets are robots and Nazis. My hypothesis is that this dichotomy of thought (Evil! But fun!) and emotion has been conflated with their own Red v Blue mentality of Republicans v Democrats, and they truly believe that the Nazis were just the losing side with the winners writing the history books that made them into devils. Isn’t that what the whole “End of History” meme about back a few years ago – once the Republithugs gain the absolute power they believe they so richly deserve, they’ll just change all the lessons and books to say that they were on the side of Truthiness, Just-us, and The American Way. And then they will have been right all along, just like your kids are taught in school.
edit: grammar.

Always the same BS projection about liberals and progressives hiring actors. DeSantis is a fascist, so of course neo-Nazis love him.

It means he should go to hell.

I had to look up the “Youngkin Incident” and those "Neo- NAZIs were also REPUBLICANS. Just because they were associated with the Lincoln Project doesn’t make them democrats or leftists or whatever. This is so dumb it makes my head hurt.

need a name for this truly ghastly social phase

“… first as tragedy, then as farce”