Man jailed four months for "meth" that was epsom salt

Should have been released on bail while they processed the sample.

They probably seized and civil forfeited his assets, so no bail $$, a salt dealer deserves no mercy and the constitution and human rights are a barrier to effective policing.
Sovereign immunity, can we correct this naturally abusive doctrine inherited from dictatorial monarchy claiming divine right?

Yeah, but his name will still be uttered in university philosophy departments for millenia, just like the last an earlier guy who was put in jail over salt.

/ mind you, that last guy did have to pay for it. After the lock up, the hemlock up.

Does the AU constitution not have the right to a speedy trial?

Also, does this person get back-pay from the government and a letter (or a face to face) from the judge to the person’s employer explaining the colossal fuckup?

That’s the least the government can do.

ETA: I don’t know how common this is in Australia. But it’d be really awesome if this kind of fence-mending happened in the USA. If the cop and the court fucks up, nothing happens. They should at least be required to aplogize and smooth things over for the falsely arrested at least job and housing-wise. Otherwise justice simply isn’t served.

At first, I thought that you were talking about Gandhi, who protested the salt tax by walking to the beach and making salt…

Forgot about Gandhi. Corrected. Thanks!

“Urgent cases are completed within the timeframe required by the police and the courts,” [a Queensland Health spokeswoman] said.

How about doing it in the timeframe required by the person whose life you are potentially ruining?

More and more, justice serves only itself.

Since the innocuous-sounding ‘bath salts’ are apparently Satan’s own ultimate scourge of mankind, I can only image the horrors of this newfangled epsom drug. Think of the children!

At first, I thought that you were talking about Gandhi, who protested the salt tax by walking to the beach and making salt…

Could we evoke this stunt when protesting alcohol taxes by building a still…?

So many missing details here… Did he think he was buying meth, and just got swindled? Was he planning on swindling somebody else by selling them the epsom salts and saying they were meth? Did he just want to pamper himself with a nice bath? Hopefully they weren’t packaged up in a box labelled “epsom salts”, and were otherwise suspicious-looking? I want more details, dammit!

Though I was a bit confused about all the names involved here. It sounds like the judge complaining about delays due to forensic processing times isn’t the same judge involved in the “4 months for epsom salts” case. That case seems to have just been brought up as an example of a particularly egregious delay, in an article that is otherwise actually just about delays in general.

In the process of refreshing my memory of how these things are handled in France (to put it short, rather randomly), I read that 39 states of the Union (plus DC) do have a compensation system for unjust imprisonment due to miscarriage of justice. Of those states, twelve (plus DC) manage this on a case-by-case basis, and seventeen have a fixed rate of compensation, with Texas being the most generous (with $80,000 per year of imprisonment) and Wisconsin the cheapest ($5,000 a year - seriously).

If you need plans…

If you need plans…

Stills are easy, I’m a chemist-in-reserve.

Should design a temperature controller. Something to maintain temperature of the vapors at constant temperature at the condenser inlet, while making sure the bottommost temperature of the flask won’t go above a set limit to avoid thermal degradation of the feedstock. Ideally with a Raman or ion mobility spectrometer integrated to the condenser’s outlet… GC-MS would be ideal but it takes too long and is big and expensive, so unsuitable for in-process operation of this kind, better to use it for final batch checks and contract it out…

And yes, ethanol stills are remarkably easy. The hardest part isn’t getting a good fractional still running at azeotrope, but getting the right cogeners for the style of spirit.

Would’ve been more ironic if it happened in Epsom.

The police thought it was meth, turned out to be ACTUAL bath salts, not the drug.

4 Months processing time is crazy, is there not a field test for meth? no test strip or add a drop of liquid and see if it turns blue? really?

Just did a quick search and there is, for christ’s sake you can get 25 test strips for $16 from amazon!!!
For $0.64 (sixty four cents) this guy could have been spared 4 months in jail, for a positive test i understand that they might have to send it off to a certified lab to confirm, but for a negative they can be certain it isn’t meth. 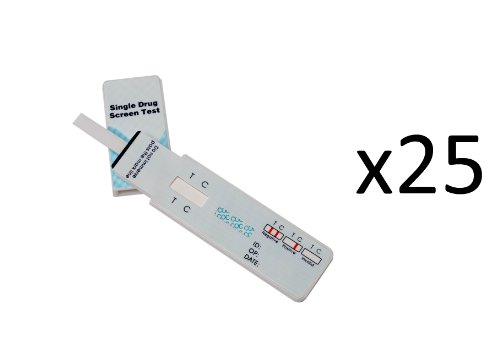 …with Texas being the most generous (with $80,000 per year of imprisonment)…

That sounds a lot like a sick joke, given that once you’re in jail in Texas, seeing the outside isn’t a likely outcome.