The biggest danger to Rubio and his party from drop boxes is that they make it easier for more people to vote. How are they going to keep winning if that’s allowed to happen?

“The public has to believe those elections were fair”… Marco, you lying sack of shit. you had no problem lying about elections being fraudulent when you KNEW they were not. Shameless, spineless.

Hazard 1: Mailbox bombs, because heck, those happen all the time. “There’s danger involved in drop boxes,” the frightened Senator said. “Imagine someone decides, 'Oh there’s a dropbox, I’m just going to put some explosives in it and blow it up.” Or better yet, imagine Republican votes zapped away by Jewish space lasers, because those are also a thing according to Rubio’s GQP.

He’s full of shit. CA voter drop boxes have slots that are about ⅛" wide. It only fits one sealed ballot at a time so while I don’t know anything about bombs, I really can’t imagine a functioning bomb that fits in such small dimensions.

Rubio has a habit of opening his big yap and removing all doubt as to what kind of an asshole he really is. Thanks Dude.

How many whiteboard sessions in the republican grotto o’ eeevil have been devoted to “Made up @#!$ for why making voting easier is bad” (“yes Jeremy… we already have ‘hand gets stuck in drop-box’… anyone else!?”) 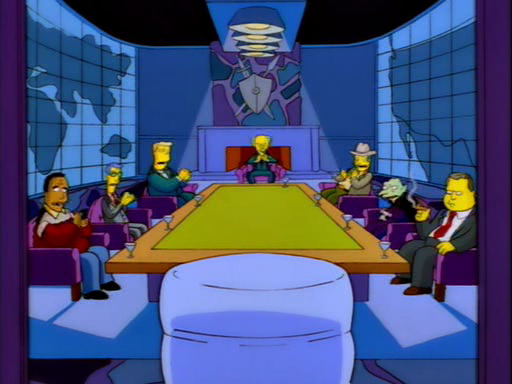 “Will no one rid me of these turbulent drop boxes?”

OK, fine. We get rid of drop boxes. But in return we open up more voting locations, increase voting hours, and allow early voting.

Ohhhh. . . riiiiight. . . “voting integrity” was never the issue in the first place, the issue was voting itself.

“Imagine someone decides, 'Oh there’s a dropbox, I’m just going to put some explosives in it and blow it up.”

IIRC, some guy did try to set fire to one in 2020. But him mentioning it means that more than likely some Republican will do just that. Probably in a poor minority neighborhood to try to target mainly Democrat votes.

I personally have no problem with drop boxes, but due to possible 3rd party tampering, I personally will be going to the polls. Early, most likely, as the area I moved to seems big on that.

But if you are unable to easily make it to the polls, drop boxes work.

What if … someone got a disease from touching a dropbox? No one sanitizes those things, they’re just standing out there, picking up all the cooties going around! How unsafe is that?

What if … there was a bear hiding behind a dropbox? You’d never know until it was too late!

What if … a tsunami hit while you were trying to drop off your vote?

No, no, much safer to go and stand around for hours in one of those incredibly long lines that exist at the few polling places that our officials are prepared to allow in areas where people don’t vote for us, where you can be harassed and intimidated by some of the heavily-armed thugs that we are somehow prepared to overlook while we’re considering potential threats to a fair and free election.

Republicans really have no universal platform to run. So they have to make sh*t up and magnify it into an “issue”. The sad part is that some people actually fall for that crap.

Can’t be any more hazardous as voting by mail. Why, your completed ballot is handled by multiple people unknown to you, any of which could steam open the envelope, substitute you ballot with another, and then glue it back shut! /excessive_sarcasm 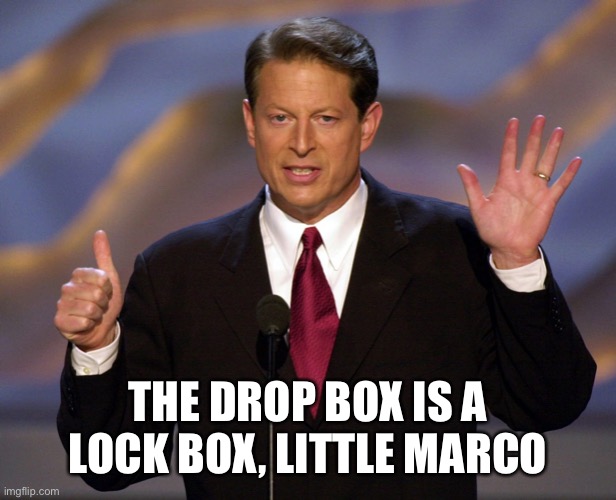 What if … someone got a disease from touching a dropbox? No one sanitizes those things, they’re just standing out there, picking up all the cooties going around! How unsafe is that?

What if … there was a bear hiding behind a dropbox? You’d never know until it was too late!

What if … a tsunami hit while you were trying to drop off your vote?

Use the kinetic energy to disrupt the tsunami’s flow and divert it around you.

Whaddaya mean guns aren’t the answer to everything? /s

I mean, it’s true that in all 50 states, whatever you put in a voter drop box—whether it’s a valid ballot, an invalid ballot, a fake ballot, or a tomato with “MAGA” written on it in permanent marker—the election board has to count it and is powerless to cross check it with the voter roles to determine if it’s valid.

I think you get the gist - the GQP would really prefer if NO voting happens so they can appoint an autocrat of their choosing.

Ballot harvesting thugs stole my father’s internal organs to sell on the black market, and my mother was flattened to death by a rogue deep-state drop off box. Voting is shredding the fabric that makes this country America! End it once and for all! 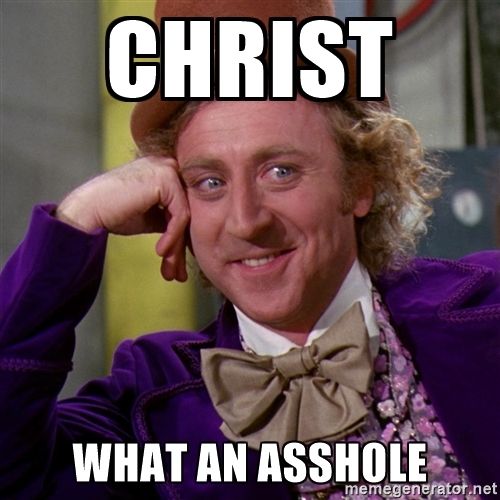 Can’t be any more hazardous as voting by mail.

Statistically, a significant number of Americans can expect to suffer painful paper cuts while inserting their ballot into the envelope.

IS THIS WHAT DEMOCRATS WANT?