the whole lot will now be destroyed by police

That is sad. This is outdoor stuff and based on the time of year it already is, all they have to do is post a guard for a few more weeks tops and they can harvest it all for medical use.

Or they can just leave it be and let the person who grew it come back and harvest it and distribute it to all the people they originally intended to distribute it to who are “self medicating”.

Either choice results in harm reduction which should be the police’s first priority.
What’s it hurting? nothing.

who found the plants growing on disused private land on Lower Marsh Lane, a few streets from a university halls of residence, a sixth-form college, fitness centre and Berrylands train station.

Someone is not going to be able to afford university next year. Their green scholarship just went up in smoke.

Surely they have a duty to monetise it. Like auctioning off criminals’ property, they could export it to a more civilised country. 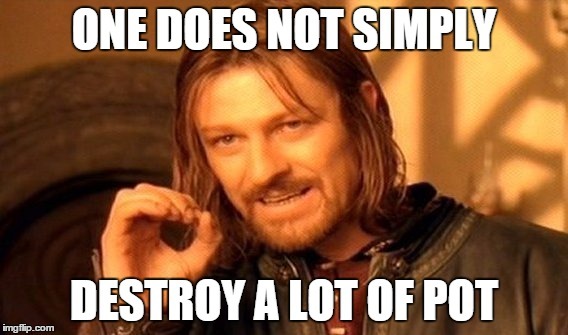 when I first moved to ATL, was super-broke and still had a car, I definitely did a lot of location scouting for an outdoor grow. Didn’t find a place I felt comfortable with, unfortunately. Not that I can say for sure I could’ve converted, I’d never done a successful grow, but I seriously looked into trying to find a spot along I-20 (good light all day.) Nuff respect to this grower. Shame about the bust, dude.

I have to agree. I grow chillies and tomatoes and I get better gardening advice from cannabis growers sites than I do from more conventional gardening sites.

for an outdoor grow

A while back, I had a very large amount of seeds (like a couple of liters.) I did the Johnny Appleseed thing rather enthusiastically for a while. Bring back the ditchweed!

I have to agree. I grow chillies and tomatoes and I get better gardening advice from cannabis growers sites than I do from more conventional gardening sites.

best of luck with your hydroponic “chillies and tomatoes” wink wink.

My plan is to burn it all, roughly a third of a gram at a time!

I thot there was a plot to destroy the lot of pot. Not?

That was a lot of pot that ought have been bought…all that effort wrought for naught.
At least they weren’t caught even though the police were hot to trot and thought to steakout their spot.

What pox have you got? Bought?

The weed that indeed would recede from the deed can be denied to the people only through greed.

Heed the creed: No matter the breed, concede the weed to those in need.

ETA - Every week. On fleek.

More weed than you can smoke in a long summer—hundreds of marijuana plants!

You’ve obviously never invited my cousin over for a few days.

Get Thee to a Punnerry!!!

“wink wink” - your humor made me smile - but I have seen really amazing chilies, tomatoes & other stuff being successfully grown in Alaskan company housing and dorm-rooms using techniques developed & pioneered by pot-farmers - & by NASA. Methods discovered by search engines.

Pot-farmers and NASA agriculture-researchers, hmm. Just personal anecdotes I heard from a guy who knows a guy (who read it in Rolling Stone/Pop-Sci), but I’ve heard that there is interaction between them.

For example, the NASA employees who grow their own, the NASA researcher who grew during university, and my favorite- NASA agriculture–researchers paying consulting fees to expert, veteran marijuana-farmers in the effort to perfect extra-Terran agriculture.

The phenomenon you may or may not have seen in the sky tonight was not a UFO.

I shun the pun; my crime is making time for rhyme.

What a waste of police resources. Our elected officials seriously need to pull their heads out of their asses and get rid of this “War on drugs”–it doesn’t do anything but ruin lives and divert resources away from stopping real crimes worth preventing/solving.

Not sure it’s always their heads they put in asses if David Cameron is anything to go by.