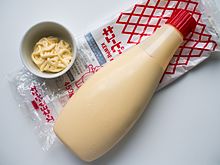 This is a list of notable mayonnaises and mayonnaise-based sauces. Mayonnaise is a thick cold sauce or dressing and also forms the base for many other sauces. It is an emulsion of oil, egg yolk, and an acid, either vinegar or lemon juice; Mayonnaise is used as a foundation for several sauces, including some found in French cuisine.

Yet the best mayo in existence is from Japan* (as seen in the photo for the wiki article).

*Because MSG is literally the spice of life.

Most of us come from immigrants

And many of us are only a few generations or less out from those immigrants. I gave it some thought a while ago and realized I am only a third or fourth generation American.

It’s ridiculous and comes from a false premise.

Yep. This piece ran in the paper here yesterday. (Another ran talking about how the Irish were treated back when, they’ve been doing that a lot recently, I think to counter some of the local anti-Somlali sentiment).

Immigrant women make up most of the eldercare workforce. Asparagus is now grown mostly in Mexico rather than the San Joaquin Valley, where less illegal immigration has slimmed the agricultural labor force.

Looking at the after effects of the deportation and “repatriation” of hundreds of thousands of Mexicans and Mexican Americans during the Great Depression because “they were stealing yer jobs,”

A study almost a century later by economists at the Universities of California at Berkeley and Davis, and the Korea Development Institute, found that cities that deported most aggressively saw a fall in the employment and wages of natives, especially those holding complementary jobs that in some way depended on the low-wage industry in which the Mexicans labored.

Not only did natives not replace the lost Mexican workers. “The repatriation of Mexicans, who were mostly laborers and farm workers,” the researchers wrote, “reduced demand for other jobs mainly held by natives, such as skilled craftsman and managerial, administrative and sales jobs.”

But, you know, why let pesky facts get in the way or craft policy that can lift everyone up when it’s easier to “hurt the right people,” and get votes.

ETA, here’s an excerpt from the one about Irish immigrants back when:

The spectacular rise of the Know-Nothings, disrupting existing political alignments, has parallels in modern populist movements driven by anti-immigrant sentiment. And there is, in both cases, the same demand for radical solutions, regardless of the human cost of implementing them.

But, you know, why let pesky facts get in the way or craft policy that can lift everyone up when it’s easier to “hurt the right people,” and get votes.

This is the problem with every debate or Republican policy discussion. None of them are based on any actual facts.

While people could debate why the sky looks blue, present different evidence and analysis for what causes the effect. That debate could compare the impacts of the different facts to the overall perception that the sky is blue. None of that matters though if one person in the debate says the sky is orange, just because, presents no facts, and ignores all evidence to the contrary. That our press or anyone else gives the last person equal footing is a huge problem.

People who are not serious about reality shouldn’t be taken seriously. MTG and most of the Republican party fit this description today. The press should report on them that way, not as some “both sides are equal” ridiculousness.