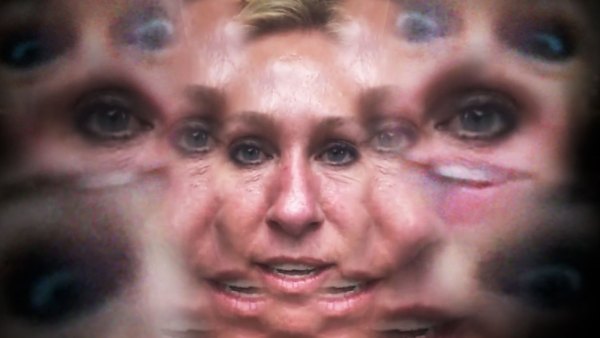 This video starts with a wild look in MTG’s eye as she launches into a tirade about how these shootings seem perfectly planned to get rich white folks to go along with gun control laws. I am …

This is the go-to “explanation” for every mass shooting since at least Sandy Hook. There are no mass shootings, only carefully orchestrated performances by crisis actors. Or some such bullshit. I guess they think it defuses the whole issue, at least for their brainwashed, echo-chamber-entombed followers. At this point it just sounds like more noise.

Reading from a script, and without showing a shred of sympathy for the victims of the shootings, she said:

i had been taking bets with my wife and sons about how long it would take for one of the death-cultists to start screaming “false flag!” i figured it would either be boebert or greene.

i’m surprised it took this long for it to start.

So is she arguing that if it wasn’t a false flag we really do need more gun control?

Almost sounds like it’s designed to persuade Republicans go along with more gun control. I mean, after all, remember, we didn’t see that happen at all the Pride parades in the month of June. But as soon as we hit MAGA month, as soon as we hit the month that we’re all celebrating, loving our country, we have shootings on July 4.

Or maybe LGBT+ activists are less likely to fire guns in anger than rich white conservatives.

Also, is that a racist dogwhistle at the beginning. Basically saying these shootings must have been staged because “those people” are the violent ones?