Imagine how awful our lives would be were she the next GOP Press Secretary.

Oh wait you mean she is not that already?!?

A lifetime gerrymandered seat in Congress where we have to listen to her.

That moment when she closes her eyes…she’s drunk on it.

Here’s a page with the breakdown of demographics…

Demographic data on each of the delegates to the Constitutional Convention

This lot hate iran, but I bet they secretly admire how they’ve been able to impose their religion on the country. But they probably like the Saudis more, especially since their religious oppression does not make nearly as much news here as Iran’s does, since we’re allies with the Saudis.

The Church of England was always entrenched in the English (and later British) government. The monarch is the head of the Church, although running it is left to the Archbishop of Canterbury.

Then there is this lot. 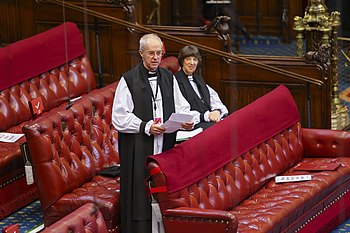 but I bet they secretly admire how they’ve been able to impose their religion on the country.

Also being able to assassinate journalists WITH A BONESAW on private property and nobody does a damn thing about it.

Would Marjorie Taylor Greene find herself serving as a Handmaid in the regime she thinks she wants to create? Or does she picture herself as Aunt Marjorie?

Would she even get to make that choice for herself, in such a scenario?

old ones get tattered from use.

Maybe Vatican City? That’s pretty small and relatively homogeneous. One religion: [Roman] Catholicism. It is unlikely to be scalable in the U.S.

I think also that for the average GQP member what Pope Francis says (and Pope Benedict said, and I’m going to stretch back to Pope Paul) isn’t what they normally like. Maybe on abortion, but surely not for immigrant and poor people.

In my attempt to imagine church=state scenarios in the U.S., I was trying to imagine how MTG and her ilk would remove or replace institutions like… voting, the three branches of federal government, the mechanics of how government power would be allocated, etc.

The policy stuff is related to all that but I was running various counterfactuals in my head trying to understand–if that is even possible of MTG–what this woman claims to want.

…like putting the separation of church and state in the first amendment.

…but it’s clear this woman doesn’t know anything about the document she professes to revere.

True even though I’m not sure whether you’re referring to the Constitution of the United States or the Holy Bible. Her ignorance is multifaceted.

She can try all she like, but it’s clear they are pushing the remnants of a fading religion, and the harder they try, the faster people seem to be shedding Christianity for anything else. The time to have made us a Christian theocracy was the 1950’s, when they got “Under God” added to so much crap in our country. They are seventy years too late for that ship.

Also being able to assassinate journalists WITH A BONESAW on private property and nobody does a damn thing about it.

Well it was on the grounds of the consulate, so not really private property.

we can drop in bibles when the old ones get tattered from use.

Are you under the mistaken impression that they actually read the Bible?

I think also that for the average GQP member what Pope Francis says (and Pope Benedict said, and I’m going to stretch back to Pope Paul) isn’t what they normally like.

I think you are going to have to go back to before Leo X, or maybe Alexander VI, to find one they do like.

There are seven states that have a ban on Atheists holding office in their constitutions. Though existing Supreme Court has judgements preventing them from being enforced, they remain on the books.