Mars Perseverance: What we know so far

Originally published at: Mars Perseverance: What we know so far | Boing Boing

This is the first 360-degree panorama taken by Mastcam-Z, a zoomable pair of cameras aboard NASA’s Perseverance Mars rover. The panorama was stitched together on Earth from 142 individual images taken on Sol 3, the third Martian day of the mission...

Try also “Cool Worlds” presented by Dr. David Kipping; it’s the youtube channel for the astronomy dept. at Columbia University. The only problem with Dr. Kipping, is that even though he explains concepts in a very clear and understandable manner, his voice is so beautifully soft, and melodic, I tend to drift off.

Astronomy, exoplanets, astroengineering, the search for extraterrestrial life & intelligence, futurism and interstellar travel. The Cool Worlds Lab (http://coolworlds.astro.columbia.edu), based at the Department of Astronomy, Columbia...

Makes you proud to be a member of the species that could do this.

I know! In just over 100 years, we’ve gone from the first airplanes, to sending probes outside the solar system.

See how plucky Perseverance touched down on the unforgiving dust world

Not really that much new information - I just really like the headline.

ok…so, the 360 degree video wasnt enough for me and given the fact, that perseverance got every camera as a stereo-rig, I went to

Images from the Mars Perseverance Rover

Raw images of Mars taken by the Perseverance rover at Jezero Crater.

and downloaded 180 left/right pictures from the mastcam-z and made a stereoscopic 360 degree compositing with MS Image Composite Editor (only thing which is not entirely made out of photos is the sky, cause there werent any, so I cloned most of it, sundisk is also just made up), following picture is halfsize as preview due to the upload-limitations of the board :

and here is the direct link to the via right-click downloadable full-hires version:

its made as overLeftEye/underRightEye standard-format for VR with 8000x4500 pixels, so its as sharp as it gets; you can watch this via sideloading in oculus, vive and every cardboard-based viewer on your phone that also loads pictures (not just videos).

I use for example the VR media player on android, its simple, stable, small, does a very good job on anti-drifting and its free without any ads:

start the app, tap on the cardboard-viewer-symbol in the right upper corne to provide stereo-vision, tap on the menu-bar in the left upper corner, open the gallery on the left, load the picture, choose 360°-lens and over/under, put your phone in your cardboard/samsung gear vr/whatever viewer and enyoy your trip into the jezero-crater in glourious 360 degree 3D.

(as the stereo-mastcam-cameras are 24 cm apart, you will notice a kind of enhanced depth-perception of the landscape as our eyes are only 7-8 cm apart.)

its as sharp as it gets 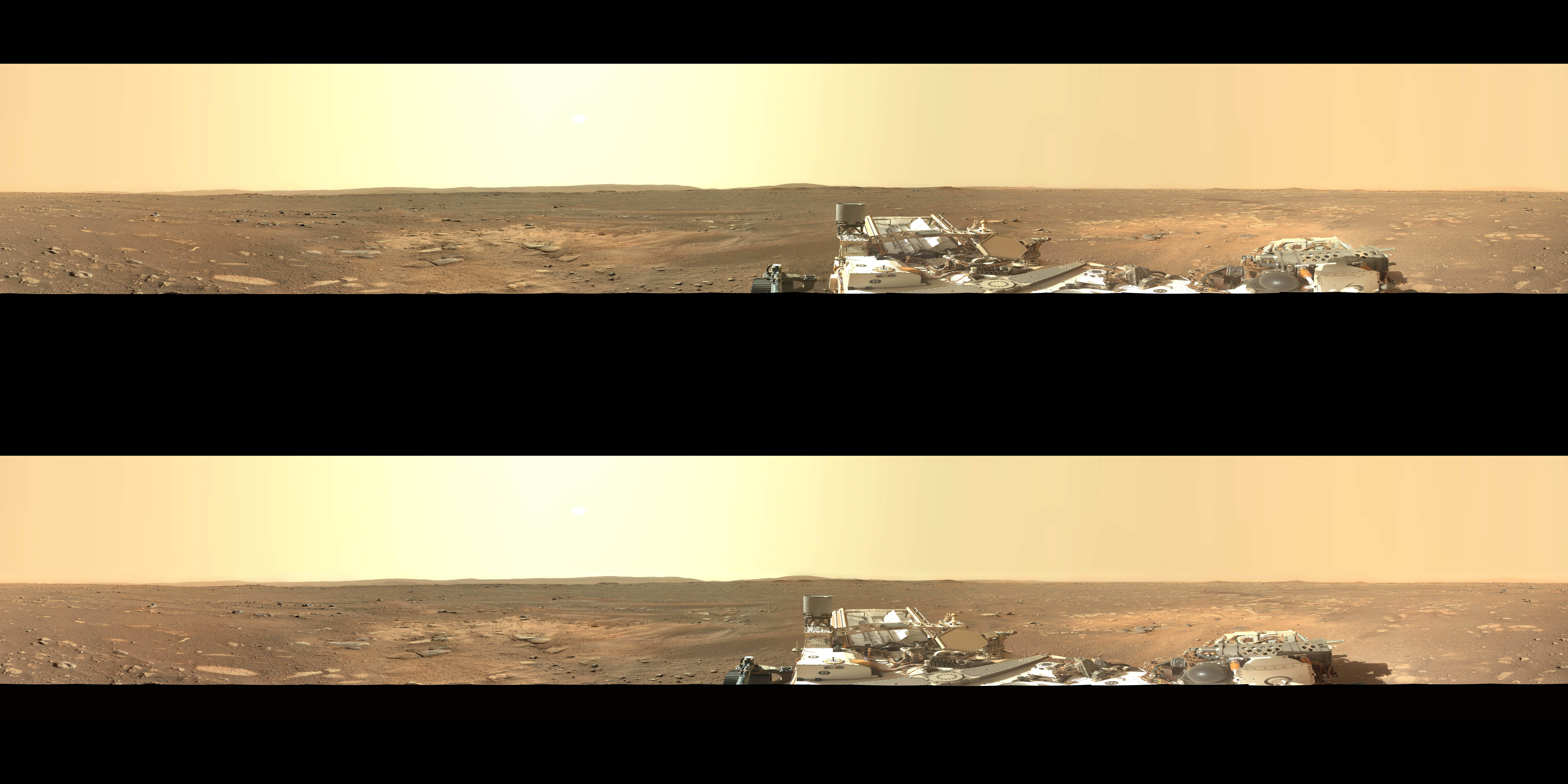 Cool. I only tried to make a “wee planet” using polar coordinates in Gimp.

How To Make A Wee Planet

A panoramic photo is capable of showing a 360° angle-of-view all around. Such an image is difficult to print and see as a whole due to its extreme aspect-ratio. One way to show everything at once is to transform the panorama into a wee planet. This...

It is. I just wish we could get our shit together here on earth…

when is the copter scheduled to fly?

At around 3:00 he claims that this is the “first time” we’ve seen a heat shield separate, but that’s incorrect.

A Closer Look at the Mars Perseverance Rover's Incredible Cameras

The feats of engineering packed just in the main camera array is a marvel of science.

The scientists and engineers hope to fly the module for 20 or 30 seconds next month.

That’s what the APOD site said: “there has never been anything like her before. After being deployed, possibly in April”.

Imagine forgetting to take off the lens cap…