Matt Gaetz sexualizes a teenager who obliterated him on Twitter

Originally published at: Matt Gaetz sexualizes a teenager who obliterated him on Twitter | Boing Boing

You know… that’s a good point. I think when people think of “sexualization” they think of just objectifying girls that our society deems conventionally attractive. But it also means denigrating women who are not considered to be such.

She’s lovely, though. And Gaetz is a piece of shit.

He suggested that he does not feel that a teenager is ‘attractive enough’ for him to have sex with, or if I misread his ‘sarcasm’ he does. He is creepy on about 500 different levels.

Thanks for posting this. Olivia’s tweets delighted me so I’ve sent a donation to Gen Z for Change, the organization she works for, which I had never heard of before.

The shit just keeps burrowing deeper into the cesspool.

@RonFilipkowski
Matt Gaetz today: Q - Is it safe to say that, based off these comments, that you’re suggesting the women at these abortion rallies are ugly and overweight? A - Yes Q - What do you say to people who think those comments are offensive? A - Be offended https://t.co/k40syiTnvi
9 Likes
ClutchLinkey July 25, 2022, 8:37pm #6

I kind of wish the reporter had asked instead, “based on your comments, are you saying that rape and ensuing pregnancy are driven by the attractiveness of those attacked? Because you imply that unattractive people would have no concerns about getting impregnated.”
Because that is what this asshole was hinting at, and it’s despicable.
The reporter could then bring up the recent tragic tale of the 10-year old in Ohio, but I fear that would be too much to Gaetz’s liking.

The resulting twitter feed under that was a rogue’s gallery of right wing radicals.

I need to go take a shower to rinse the contact off.

“Given that you’re being investigated for illegally exhanging money for sex, including of at least one underage girl, don’t you feel discussing having sex with other teenagers makes you seem like more of a predator?”
“Do you feel only attractive people are deserving of rights and benefits? If so, why have you devoted the last four years to championing Trump?”

Ooh, or, “based on your comments, you seem to think that only people who may get impregnated should have opinions about abortion law. In that case, please explain the recent laws passed by institutions headed by persons who have not and will not ever become pregnant.”

What the hell happened to the case against this turd? Can’t he be apprehended, perp-walked and tried already?

When I did it, it eventually revealed a new Emmanuel the Emu video.

Or should I say, Emmanuel Todd Lopez. 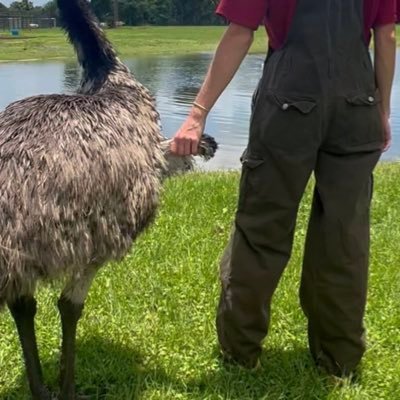 Can we as a nation get away from this whole “Be the most obnoxious ignorant putz you can be” as a profitable business model?