Maybe the workers could call themselves, “The Peasants’ Revolt Union”?

Call it a guild. Have little events. Put on mystery plays.

I don’t think this suit can succeed. IIRC, trademark infringement only works if the two parties are in the same general field of business, so consumers might buy from one business thinking it’s connected with the other. But being in the dinner theater business is not the same as being in the union “business”.

But I suppose just the threat of a suit can intimidate the union if they don’t have enough money to defend themselves against the company.

But I suppose just the threat of a suit can intimidate the union if they don’t have enough money to defend themselves against the company.

Yeah, they’ve got no leg to stand on - the union isn’t a business, much less a competing business; this is entirely about the legal costs as a union-busting tactic.

I don’t think this suit can succeed. IIRC, trademark infringement only works if the two parties are in the same general field of business

Tell that to the music groups System 7, Disneyland After Dark, Manitoba, and The Postal Service…

I don’t think this suit can succeed. IIRC, trademark infringement only works if the two parties are in the same general field of business, so consumers might buy from one business thinking it’s connected with the other.

Forget the Trump Papers drama, this is exactly the sort of case the present Supreme Court was bought to rule on. I suspect any novel idea for preventing unionization will be rushed to the SC so it can get the official imprimatur and be available to all employers.

I don’t know about the second two cases you mentioned but I’m pretty sure in the first two, Apple and Disney would have argued they are in the music business. They are so huge, that good lawyers can probably show they are in a thousand different businesses.

Maybe the workers could call themselves, “The Peasants’ Revolt Union”?

I guess it’s an anachronism (& I just finished a glass of wine) but how about “The Levellers”?

When Adam delved and Eve span who was then a Texas-domiciled holding company and subsidiary of Marena Intracorp B.V.?

Pssst! Just join the Wobblies! They’re bigger and they’ll fight for you!

However, remember that Medieval Times is based on the Spanish Middle Ages, not on England. Maybe María Pacheco is a better inspiration. She did actually survive the failed peasants revolt she led, even if she died young in exile afterwards. 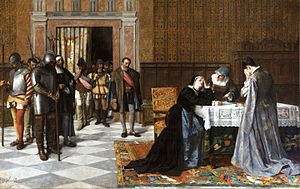 María López de Mendoza y Pacheco, commonly known as María Pacheco, (c. 1496 – March 1531) was a leader in the Revolt of the Comuneros in Spain, an uprising of the citizens against the monarchy. She was born in Granada, the daughter of Íñigo López de Mendoza y Quiñones and Francisca Pacheco and a member of the House of Mendoza. She would go on to marry Juan López de Padilla, yet kept her family name because it held a higher prestige than her husband's. When her husband, the chief of the Comuner... 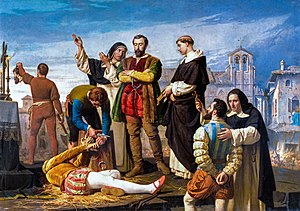 Revolt of the Comuneros

The Revolt of the Comuneros (Spanish: Guerra de las Comunidades de Castilla, "War of the Communities of Castile") was an uprising by citizens of Castile against the rule of Charles I and his administration between 1520 and 1521. At its height, the rebels controlled the heart of Castile, ruling the cities of Valladolid, Tordesillas, and Toledo. The revolt occurred in the wake of political instability in the Crown of Castile after the death of Queen Isabella I in 1504. Isabella's daughter Joanna...

That could cause some confusion with the British band of the same name, who’ve been around since 1988, and who took their name from the early British political movement.

such a dumb kid thing to do, they were so young

Unique? Really? According to The RenList, there’s at least 46 Renaissance Faires being held across the US alone just in October. Our local faire, Bristol Renaissance Faire, was founded in 1972, albeit under a different name, and so predates Medieval Times by at least a decade. That’s not even considering that décor, script, etc. as actual historical examples. I know the purpose of this isn’t to win a lawsuit, but just to drain the reserves of the union, but that claim is beyond stupid.

There’s a call from the SCA on line 2.