That’s awesome - and I’m glad it’s small. Nature really likes getting weird given half a chance - as soon as I saw it, I assumed it had somehow escaped from the crazy freebasing evolution of the Burgess Shale: 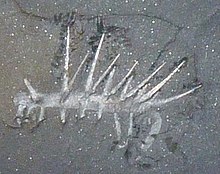 Canadia sparsa Hallucigenia is a genus of Cambrian animal resembling worms, known from articulated fossils in Burgess Shale-type deposits in Canada and China, and from isolated spines around the world. The generic name reflects the type species' unusual appearance and eccentric history of study; when it was erected as a genus, H. sparsa was reconstructed as an enigmatic animal upside down and back to front. Hallucigenia was later recognized as a lobopodian, a grade of Paleozoic panarthropods...

That picture reminds me that when I was very young, I used to hang out in the garden with my dad while he dug holes. Every now and then he’d turn up the skeletal remains of small animals, probably bunny rabbits.

So there were some wires crossed as he explained what these dry white bits of bone actually were, and so for many years after I had the misapprehension that a skeleton was actually a chalky white creature that lived (yes, lived) underground and moved imperceptibly slowly…

There are so many cool soft bodied animals, and even more we don’t know of yet in the deep sea, that it is fun to think about what has been floating int he ocean in the past. There is evidence of life 3.7 billion years ago, and multicellular life 700 million year ago - but there is so much stuff that could have been floating around as snot or jelly tubes or weird Stretch Armstrong like creatures that we will never know about because of the lack of fossils.

How did your career as a horror novelist go?

The weird soft bodied Ediacaran fossils right at the end of the Precambrian are absolutely fascinating - clearly a lot was going on, but short of a Delorean and a lot of plutonium, we’ll never know.