Antonio Rodriguez, that he was acting like he was white. So rather than deescalate, he took offense and slugged her

stepping up into his face was not a wise move on her part…but that is no excuse for Capt Escalation to jump to his best Rocky impression.

WTF is wrong with people in police unis. How is it they can’t seem to learn…ya know…anything.

No, she didn’t. This is the equivalent to yelling at a cuffed person “Stop resisting” after you beat them up. They know they’re on film so they try to change the narrative because they know god-damn well that they crossed a line and will be fired.

Which they should be.

And then jailed for assault.

Is there a different way to hit someone in the face? Cautiously? Timidly? Illustriously?

Passively? Like, if they are falling at a high rate of speed and you just put your fist in the way of their face?

Either way, while it’s tough to tell from the video, the other thing that’s fucked up about it is, after the cop punches her and they struggle, the other officers handcuff her and not their colleague. That’s the shit that has people extra pissed about policing in the US.

He just got mad and lost it. And finally we are saying, as a society, you can’t do that.

Or can you? I learned how qualified immunity works, and it is jaw droppingly appalling.

So basically, if it goes to court, they look to see if more or less the exact same incident has happened in the past or not. If not, then they literally say, “Oh, I didn’t know you couldn’t do that.” The test isn’t whether their actions would be reasonably viewed a violating rights, but whether it has happened before or not. So basically if you can come up with new and interesting ways to fuck over citizens, you can get away with.

Did you really have to start with that

I don’t mean to victim-blame here, but…

What’s the best way to end the sentence above?

Let’s be clear…it doesn;t matter what part of the sentence/comment I put that in that someone is not going to take issue with it. I did not victim blame her, she is not without any criticism whatsoever. I went with the actual chain of events we see.

Again…is it deserving of a punch in the face, hell no. Was it wise…hell no.

I used to question phrasing like that but recently I’ve been thinking about the passive voice phenomenon and how it actually functions to downplay police violence in the news. In light of that, maybe we really do need to start using language to highlight the egregious violence to re-establish context in these stories. He did hit her and we do live in a world where police hitting some one is often framed as non-aggressive.

He just got mad and lost it

In all fairness, she said he was acting “like he was white.” If those are not fighting words, I do not know what is! (/s)

the other officers handcuff her and not their colleague. That’s the shit that has people extra pissed about policing in the US.

Exactly! When she was hit and the cameraperson started to run towards her I thought it was to help her. Nope, turns out it’s a body cam and they were restraining her. Fucking hell. Imagine seeing that scene play out and deciding that what you should do in that moment is subdue the victim.

That’s the shit that has people extra pissed about policing in the US.

The other shit is lack of consequences for the police involved, despite being filmed. I remember a similar case in Philly: 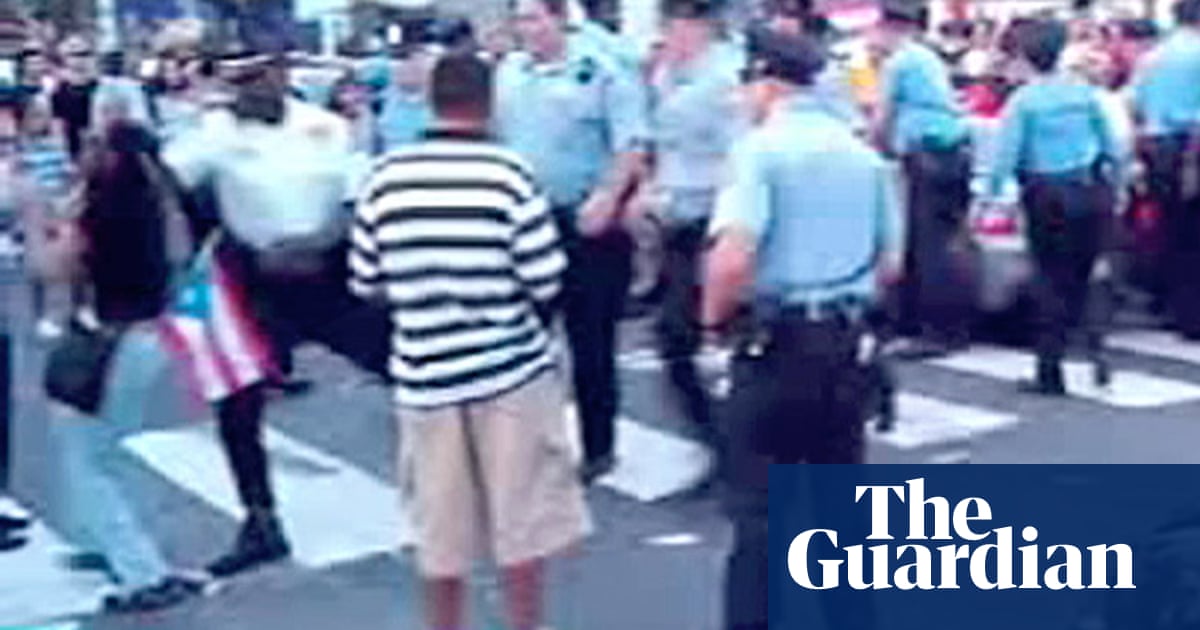 It was followed by this:

The former Philadelphia police officer who punched a woman in an incident that was caught on video is getting his job back.

Hopefully, the outcome will be much different this time.

Let’s be fair, he sure was behaving like a white cop when he started throwing punches.

Come on cops, say it with me:

A challenge to your authority is not a threat to your person.

I learned how qualified immunity works, and it is jaw droppingly appalling.

So basically, if it goes to court, they look to see if more or less the exact same incident has happened in the past or not.

I wonder what resources the court uses to research these incidents. I’ll bet they use “exact same” to make sure there’s never a precedent. Cases occur in a different municipality, different general location, with different officer rank/role, and different ethnicity of parties involved, etc.

Once qualified immunity is gone, it would be great to achieve some form of mental immunity, because it only took me a few seconds after reading that headline to recall a similar case in Philly. When I searched for the link it was surprising to see it happened eight years ago.

I hope he’s relieved of his employability, too.

US Congress cannot pass this legislation soon enough (refreshingly, the name accurately describes what it does):

edited to add — Justin Amash‘s twitter makes some really cogent points about this and other related bills: https://twitter.com/justinamash/status/1275126464871088128?s=21

The Ending Qualified Immunity Act is legislation (a proposed United States Act of Congress, H.R. 7085), introduced by Justin Amash (L-Michigan) and Ayanna Pressley (D-Massachusetts) to end qualified immunity in the United States. Qualified immunity shields police officers and other government officials from legal actions by victims and families, even if their civil rights were violated. When announcing the bill on June 2, 2020, Amash explained: This week, I am introducing the Ending Qualifie...

He’s definitely a butthead all right. Don’t know why he’s blaming her for it. I’m loving how so many “gentlemen” are being recorded nowadays. If highly intelligent applicants weren’t culled maybe more of them would realize the new-ish reality.

I teach my kids to be respectful and verrrrry cautious around police because they are human too. Humans make mistakes. Only when you make a mistake you learn from it (hopefully). When a police officer makes a mistake, you can easily end up dead, maimed or in prison.

The other officers should have cuffed him then and there. I can’t hear much of what anyone is saying here, but I am sure he’ll report ‘I gave a command that was not obeyed and had to subdue the unruly subject because she resisted, err after she gave me a headbutt, yeah, ahem, cough’ The IA inspector will edit that so he gets a couple weeks of paid vacation, a class on yada yada and he goes right back to being a giant ahole. I’m sick of this sh!t.