But Lt. Ortiz, president of the Miami Police Union, just got promoted to Captain.

police unions are, unfortunately, the few only unions that have consistently held onto power nowadays… i wonder why… [/s]

A police officer who doesn’t respect people gets rewarded. This will not have any long term effects whatsoever…

Well, if all his union brothers and sisters hate him so much and he’s such a bad cop, why don’t they fucking hold a vote and kick him the fuck out?

Smacks of a union full of bad cops. He’s not a bad apple, he’s just an average maggoty apple in a whole barrel of maggoty ones.

Consider this: maybe he was the best candidate they could find.

That kind of thinking is dumb. If all your hiring candidates are unacceptable then the position should go unfilled. Tyat way you prevent horrible unqualified people from abusing their power.

Wouldn’t it be great if the world worked that way?

Compared to what? Manufacturing Unions? Probably because unlike the Police, they have gone through paradigm shifts and have lost their bargaining power to automation and over seas competition. Neither of these things affect cops, and won’t for some time. Though eventually we will have robot cops. And unlike some other occupations where the benefits can be questionable, police unions defiantly benefit their members, behooving them to join. Also teachers unions are still pretty strong. 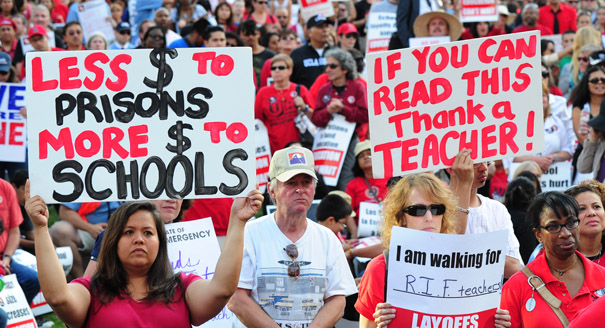 The fall of teachers unions

Teachers Unions and the War Within: Making sense of the conflict

Making sense of the conflict


I was also thinking of recent battles in WI where most public sector unions are being dismantled while police/fire/state trooper unions were untouched.
7 Likes
Papasan October 19, 2017, 1:54am #14

Awwww, once again, you had me at :“Florida”.

right, and both fire and police departments have historically been created to protect property—and usually white-owned property (modern policing likely has its origins in enforcing slavery).

even in the case of firefighting, i am thinking of how the city let chinatown burn during the sf earthquake while surrounding white neighborhoods (where the chinese couldn’t live in due to red lining and threat of violence) were vigorously protected by pumped bay water. more recently, firefighting response was much different in korea town during the watts riots than in surrounding neighborhoods.

Doesn’t seem any different than corporate America to be honest.

Rewarding bad behavior. Our current POTUS is an extreme example of this.

The POS cop completed whatever their department has for prerequisites to the next higher position, and when the seat opened up, this asshole was the next guy in the seniority line eligible to fill it. “Best” was never a factor.