You’re not addressing what I said and instead saying I said something else. I simply said

that before the right was railing against voting machines, the far left / progressive left had plenty to say about them. Cory Doctorow talked extensively about them. XKCD had this popular comic .

You’re not addressing what I said and instead saying I said something else. I simply said

You said it’s not been fine for decades.

I asked for an example of any election that was not fine in the last few decades.

I asked for an example of any election that was not fine in the last few decades.

A quick glance at google: 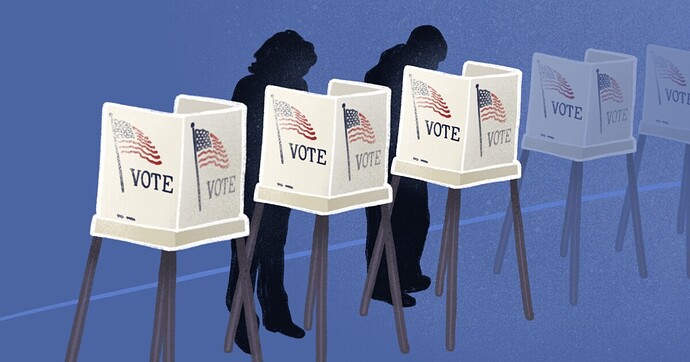 Report: Access To Voting Unequal For Those In Low-Income Communities, People...

While working at polling stations in the St. Louis region for the 2008 presidential election, Gena Gunn McClendon noticed the voting process varied,… 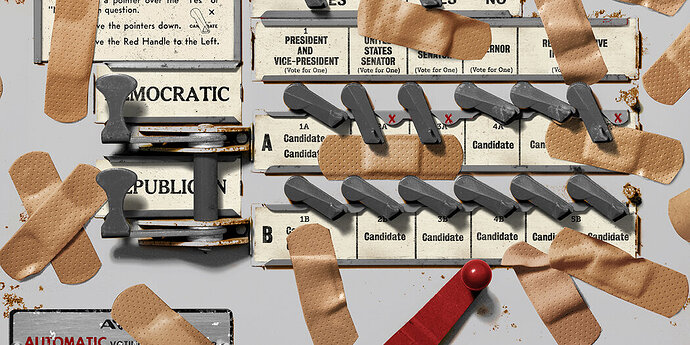 Outdated voting machines and technical glitches can lead to long lines, lost votes, and can pose major security risks. We must invest in our election infrastructure to protect the integrity of our elections. 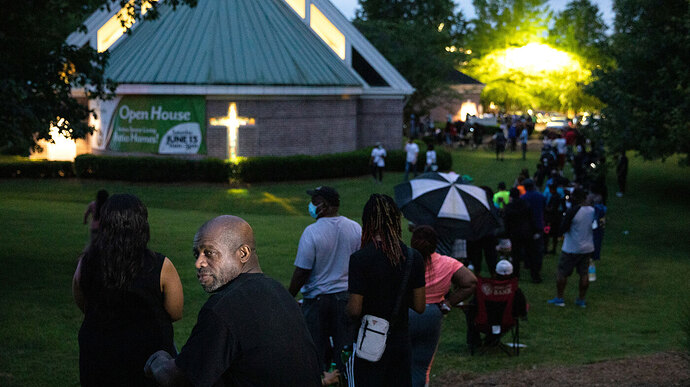 Why Do Nonwhite Georgia Voters Have To Wait In Line For Hours? Too Few...

The state's voter rolls have grown by nearly 2 million since the U.S. Supreme Court gutted the Voting Rights Act in 2013, but polling locations have been cut by almost 10%.

Access to a pen, box, and paper is MUCH MUCH harder to deny.

That looks just like the ballots I’ve used in Canada and the UK. Has the Commonwealth standardized our ballots deliberately, or is that just a layout that works?

They can’t handle having to wait a few hours for results, how on earth will they handle waiting weeks.

And tens of thousands of human counters and challengers, what a nightmare.

It’s what we do in the UK. First results are announced a couple of hours after the polls close, and I think even the most remote and spread-out constituencies, e.g. in the Outer Hebrides, generally manage to declare within 24 hours.

Of course, we have fewer people more densely packed (though the Outer Hebrides has a population density a bit greater than Idaho’s and a bit less than Nebraska’s). And we have fewer levels of government, and those tend to be elected on separate election cycles (rather than having to vote for president, senator, congresscritter, governor, state legislator and local officials all at once).

I‘m not an expert in US voting machines, but I‘ve been following what has been proposed in Germany pretty closely, and every single machine that has been discussed here had pretty severe flaws. I see no reason why voting machines should be in any way better in the US. Quite the contrary. The article I linked list most of the issues I am already familiar with. A significant number of those voting machines runs on Windows, ffs.

More than 20 years in software development led me to believe that proprietary software and hardware can’t be trusted, open source is the only viable way, and even that needs favorable circumstances.

Also I’ve seen my fair share of audits, more often than not they are merely a badge of approval you pay for. They find minor things, and overlook design flaws.

And why would you think the last election proves anything? I don’t think Republicans would challenge an election they rigged beforehand, and I think that most Democrats are above tampering with voting machines.

And, to quote from the article again

So it seems people are not even interested in secure voting machines.

And, to quote from the article again

I’m still waiting for a single example of even a suspected hack that changed an election.

Countless lawsuits over the 2020 election and not a single bit of evidence that shows there was any hacking of any machine.

There was a difference of over 7 million votes, so either a couple machines would need to be hacked to change millions of votes or a whole lot of machines would need to be hacked to add up to those 7 million votes. Did someone recruit a bunch of hackers to access to all these machines or did they figure out how to connect to all these machines remotely? The report where your quote came from details the possible hacking, it all requires hands on the machine. So again, that would require many individual hackers or trained operatives to hack enough machines to change an election.

All the close counts for president and even some of the states/jurisdictions where there was a huge difference were audited by hand. None of the states, that I could see, that used paperless machines were contested.

Still no evidence of fraud or hacking. Could happen and did happen are two very different things.

All that being said, it would be nice if we had a universal paper ballot that can be scanned so there would be a paper trail in every state.

a digital infrastructure secure enough for having people vote on much more than just candidates for parliaments or other positions, like liquid democracy. The more people can participate in politics, the better.

I do agree that the more people who participate in politics, the better. I’d go so far as to emulate the Australian system of mandatory voting - for political positions. Electing functionaries is not ‘participating in politics’, to my mind.

Hand counting was feasible before machines came on the scene, so it could still be feasible, but if a society decides functionaries must be electable (and thus, political) appointments, then it would seem machine counting is part and parcel of this. If the dog-catcher and other functionaries were appointed according to suitability (qualifications, experience, etc.) then ballot papers would be less complex and hand counting might become more feasible again.

Also, care probably needs to be taken to differentiate between machine counting of paper ballots marked by hand, where the paper ballot is always available to be counted, and digital or electronic voting where there is no real physical audit trail. (Some earlier discussions in this thread seem to be about one and not the other, and vice versa).)

Machine counting is fine by me IF it is really necessary (but hand counting is preferable). Also, make sure there’s enough machines to obviate the need for ANY voter queuing or else count them mechanically once the ballot ends, under very close supervision and subject to detailed regulation.

Electronic/digital voting, I’m yet to be convinced about.

Some would say that the local dog-catcher, police chief or other public positions are not - and should not be - political positions.

I agree 100%. I would also include judges here. But I would prefer more fine grained control over who represents me in which issue. A representative who is an expert in healthcare might be clueless about education.

Still no evidence of fraud or hacking. Could happen and did happen are two very different things.

It is about did happen or will happen. And as I explained, people are not even looking for evidence hard enough.

But I would prefer more fine grained control over who represents me in which issue. A representative who is an expert in healthcare might be clueless about education.

That’s what public sector experts (civil servants) are for - to advise politically elected representatives. Trying to elect experts to relevant positions would, I suspect, be fraught with many, many problems. But, then again, non-experts have a habit of ignoring the experts, too. Being elected is no different.

ETA and of course judges are the LAST positions that should be elected!!

people are not even looking for evidence hard enough.

Because there has been no evidence that it’s happening.

Lots of things could happen, we don’t look for those things unless there is evidence that it did happen or even might have happened.

Where is this evidence? How many machines should be looked at before determining there is no problem?

I am in the bizarre position of agreeing with a principal Mike Lindell espouses and that gives me great pain deep in my bowels. I guess a stopped clock can be right from 1 to 3 times on a given day.

Having been an election judge both with and without machines,I recognize the convenience of electronic ballots, but I do not support their use. Paper ballots worked fine before and would again while leaving a better audit trail. Also, I have been a software engineer for 40 years, so my experience with how spectacularly or subtly a machine can ruin one’s day is very broad.

I’m afraid that Lindell has pretty much killed any chance for rational discourse about voting machines.

edit for clarification: The voting fraud claims are a hoax and that has been proven thoroughly. I’m just talking about general principals including creating a climate where these things CAN be so easily questioned because people fear technology they don’t understand.

Supporting your point: A useful link with many of the places to start to see how thoroughly the election was investigated:

A large amount of money and time has already been spent investigating everything from wild rumors to some more credible questions.

Sunderland South once declared 48 mins after the polls closed.

Population: 42, plus 15 sheep, 2 cats and that flipping dog again, the one who never shuts up.

Australian here. His comment is false.
We do not allow any machines for lower house votes (The votes that form government). All our votes are done by pencil on paper, placed into locked boxed and then held in secure locations with multiple layers of scrutiny.
We do have some digital scanning for upperhouse (Senate), but ONLY after a hand count has been done. The scan is for determining discrepancies.
Local elections CAN use digital platforms for voting.

It would be hilarious if it weren’t for the fact that people are going to take this seriously.

For the record (without wishing to denigrate in any way your witty riposte to @Dire) the current electorate is in excess of 68000, although turnout (votes to be counted) seems to vary around the 40,000 mark.

Seems like a little local rivalry is in play.

To be fair, I’m nowhere near local, just late at night and trying to inject a little jocularity.
Though if they counted that lot in 48 minutes ( or whatever it was), then well done to all.

Well, good organisation is probably critical, but let’s break it down. Assuming a few mins for checking and preparing the announcement, let’s assume 40,000 votes are counted in 40 minutes. That’s 1,000 votes counted per minute. Let’s assume they have 50 counters - that’s 20 votes counted per counter per minute. Not exactly a challenge, I suspect. And I would not be surprised if they have a lot more than 50 people doing the counting, though some may be double-checking, tallying/totalling etc.

Counting is only a small part of it, though, as I noted above. This article (below) gives some clues as to the sort of organisational nuances are needed. 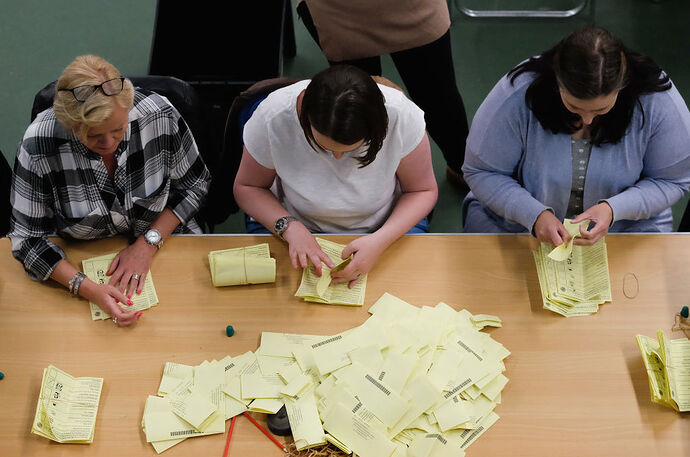 Results watchers have become familiar with the north-east being king of the hill when it comes to getting the first colours on the map.

This article (below) says up to 1200 people are involved in the overall organisation and that they recruit bank tellers and the like, who have great skill at riffling through and counting stacks of paper very quickly. And they even reduced the paper used for ballots from 100gsm to 80gsm, and it made a measurable difference. 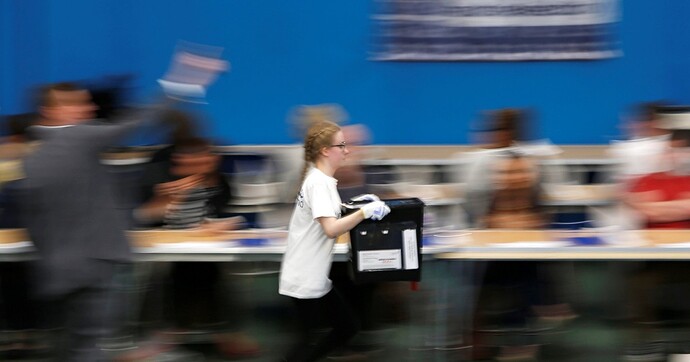 It's the first time they have not been first in 25 years.