Originally published at: Mike Lindell tells voters not to vote early so "we can overrun the algorithms" | Boing Boing

Works for me, dumbass.

In CA, we vote by mail for all elections now; I’ll be mailing in my ballot as soon as I get it.

“We can overrun the algorithms,” the stable conspiracy theorist told Steve Bannon

JFC shouldn’t both these idiots be in jail by now

But what about the algorithms?

I imagine the guy who makes up this stupid stuff must be laughing his ass off every time Pillowboy repeats one of his kooky jokes.

He must have laughed his ass off so many times that he’s got to be completely assless by now.

Methinks MIkey might be back on the methcain or whatever the hell his drug of choice is.

I thnk it’s called voting, Mike. You may be thinking of Kerplunk.

Vote when you can.

Even he doesn’t know what “overrun the algorithms” means.

To be fair, Mike believes votes are being changed in real time by a Creed cover-band calling themselves The Al Gore Rhythms.

He’s not as crazy as the mainstream media tries to make him out to be.

In CA, we vote by mail for all elections now; I’ll be mailing in my ballot as soon as I get it.

Hey Mike, I hear if you hold off on voting until November 9 then your vote will be worth triple!

Something has to be wrong with his brain, right? This goes beyond mere gullibility. He’s manifesting a singularity of ignorance. No coherent thought can escape.

If they really want to fool the algorithms, Republicans should leave it until 1 minute to the close of polling before joining the queue. 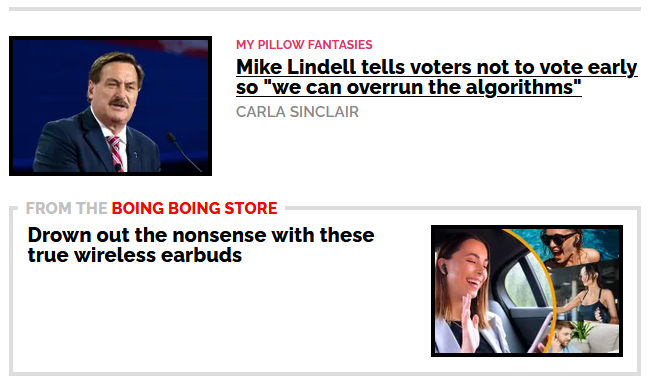 I’m betting he has no idea what an algorithm is.

Even he doesn’t know what “overrun the algorithms” means.

I am 100% positive the holistic resonant emanations from the transfer function-matrix within my cell phone cancels out those algorithms.