It got weird when he denied being Mike Pence.

I certainly feel like I’m being gaslighted when I hear that Pence “won” the debate. The strategy of denying reality didn’t work so well for his boss. I guess the only reason it worked for Pence is Pence was so low-key about it.

Didn’t you get the memo? We’re living in a post-truth era. Facts are whatever you want them to be.

Clinton’s already running a campaign ad built on the same concept. And they were pushing the “how can Pence defend Trump?” line for a while in the lead up. They’re doing a pretty decent job of using the debates to set the conversation in the aftermath.

Looks like Clintons people did one of these too.

Someone needs to sit the Trump Campaign down and break it to them that there are these magical machines that record what they say, and that it can be played back later. I’m sure they’ll be astounded.

I certainly feel like I’m being gaslighted when I hear that Pence “won” the debate. The strategy of denying reality didn’t work so well for his boss. I guess the only reason it worked for Pence is Pence was so low-key about it.

“It’s not the dishonesty that bothers us as much as it is the lack of being cool about it.”

I’m pretty sure that if you played back the video for them, they’d deny the video existed, too.

Mike Pence is a flaming asshole. Not for anything in particular, its just a fact of his existence. 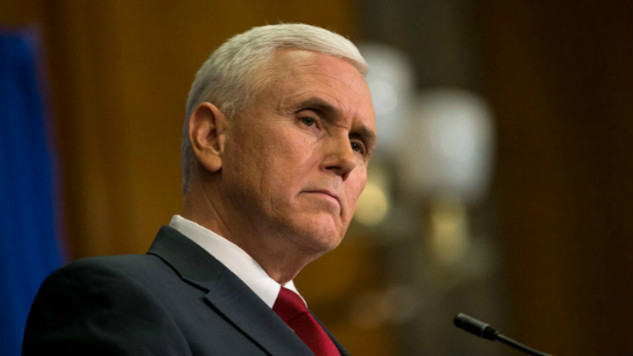 Just because Mike Pence was probably the best choice that Trump could have made for his running mate, that doesn't mean Mike Pence deserves to hold national office.

If the guy got killed by a speeding bus, I would send a case of beer to the driver. Yes I am a horrible person wishing something bad would happen to a public figure in a non-specific, legally OK because its not an actual threat sort of way.

I certainly feel like I’m being gaslighted when I hear that Pence “won” the debate.

The key is how low the bar was set for Pence: all he had to do was not specifically make things worse for the campaign. He mostly just denied horrible shit, rather than pile more on, which is a win.

Seems like “that Mexican thing” is blowing up though.

Why the press doesn’t print Trumps lies right next to Pence’s on the front page is beyond me.

Because it’s not actually as “liberal” as Fox and right wing radio would have you believe?

Hey, let’s leave Sayid out of this!

“The War on Coal”

Funny thing about that War on Coal. The biggest thing driving the collapse in coal is that its no longer cost competitive. With oil and natural gas. Its a natural out growth of “drill baby drill” and the fracking boom. Its not really anything to do with regulation or restrictions on emissions. Even coal country is shutting down its coal power plants and switching to natural gas.

They should really start using static shock collars in debates. Gaslighting is a form of manipulation that seeks to sow seeds of doubt in a targeted individual or in members of a targeted group, hoping to make them question their own memory, perception, and sanity. Using persistent denial, misdirection, contradiction, and lying, it attempts to destabilize the target and delegitimize the target's belief. Instances may range from the denial by an abuser that previous abusive incidents ever occurred up to the staging of bizarre events by the abuser with the inte...

…in front of Trump