Mixed feelings about the MacGyver reboot

On the one hand, drooling over the prospect of new episodes of one of the best shows ever. On the other hand, it looks like they’re going to turn it into another high-octane action series instead of the clever story of a man who wins by fighting with his mind instead of his fists.

Also, I can’t tell if MacGyver looks younger or I’m just getting older.

Now if you’ll excuse me, I need to go chase some kids off the lawn with string and a piece of chewing gum…

Also, I can’t tell if MacGyver looks younger or I’m just getting older.

you are not getting older you are old. a little younger looking but that much.

Sincerely hoping you’re wrong on both counts, but afraid you might be right at least on the first.

one of the best shows ever

Ah, c’mon, the original MacGyver was a veritable parade of delightful improbablity

Perhaps they could update the character to make him a gifted coder instead of an engineering genius.

So instead of boring stuff like building airplanes out of old cement mixers or making explosive devices out of household products he’ll just be tapping away on his smartphone for half the episode until he invents an app to save the day.

Inexplicably Hawaii 5-0 is somehow still on, so you really never know.

I think I saw that’s getting a reboot too.

(American) shows actually in need of a reboot:
Manimal
Hard Time on Planet Earth
The Many Loves of Dobie Gillis
The Name of the Game
My World and Welcome to It
The Great American Dream Machine
The Delphi Bureau

(Most of the shows I remember fondly - including MacGyver - would not benefit from a reboot, but all of these could use more episodes and might benefit from being brought into modern times.)

Ah, c’mon, the original MacGyver was a veritable parade of delightful improbablity

My Gram liked it; she thought Anderson was quite the fox.

Just for you, I’ll give the pilot a try, even though I’m skeptical of all reboots and sequels in general, but especially ones that try to mine my 80’s nostalgia. 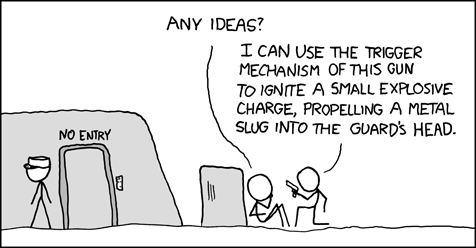 I’ll give the pilot a try

Watched it. Saw someone get killed, figured the person wasn’t actually dead. Fast forwarded, saw it was true. Gave up.

I did like the labels they would show when he did something, give you an idea of why he picked that object.

Plus the line “You hack computers, I hack everything else.” was pretty good.

Because we all know what happens when the screens try to do hacking and programming to keep it palatable to the LCD…no thanks.

Inexplicably Hawaii 5-0 is somehow still on, so you really never know.

I do have fond memories of being allowed to stay up a little later than normal on Monday nights so I could watch Macgyver with Mom and Dad. A hero that used his brains really appealed to bookish young me.

I’ve seen the ads around for this remake and unfortunately the thought of it didn’t fill me with hope (particularly since it’s network tv*). I didn’t see the premier—don’t even own a tv—but I’d be willing to look it up and give it half a chance, for old times’ sake.

*uh, does that term even hold the same meaning any more?

This topic was automatically closed after 147 days. New replies are no longer allowed.