Monkey tries to teach human how to open a nut

I remember going to the monkey house at the zoo and, like, all of them showed me how to bust a nut. Like, all of them. Once Mom regained her composure, she dragged me out, and her answer to all my resulting questions was “You’ll understand when your older”.

When we moved into the place we are renting, we stored our boxes outside for a few days, under a detached porch. We came back to find a single hole in each box. As we moved in, a crow came down and poked another hole in a box an looked in. Mystery solved.

It later entered the house and observed us. It became a kind of “friend”, following us around the property, teaching us to leave water out. One day, “#12 crow” (as we named it), came in close and made a racket. I didn’t know what was wrong. A hang glider was circling over head. The crow was insistent that this was a threat to us. It taught us to take cover when giant human eating birds were overhead.

Once, we decided to give it some food. It wasn’t interested. It came over with large grub from the compost and put it down. Later it showed us acorns, peanuts some some worms. We apparently needed to be taught what to eat or what to help it find. It rarely took food from us, but when it’s water

It was a fantastic beast until it disappeared. We could only identify it by its behavior, and no other crow from this band has acted quite the same on the property.

Not offering lessons, mind you.

Once Mom regained her composure, she dragged me out,

So you never got to see the lions then?

The Lion And Albert Poem by Marriott Edgar - Poem Hunter

Band of crows? My good sir tis a Murder of Crows!
Like a parade of Elephants, what what.

So you never got to see the lions then?

JESUS CHRIST IT’S A LION GET IN THE CAR!

Someone should have told Michael Skakel

It’s truly depressing how backwards and primitive some of our evolutionary relatives are.

If it had any brains whatsoever it would hide its techniques from view, protect it through legal paperwork as a valuable intellectual property, and attack anyone else for even trying to open a nut without paying a licensing fee or at least offering him a portion of each nut.

A group English professors leave the pub and notice a group of ladies of the evening.

This will only end in tears. https://www.youtube.com/watch?v=CWIbQqbivVc

The monkey has evolved past tool using to become management: telling others how to use tools.

P.S. They can teach us so much about life on Earth.

Watch your toes little guy! Obviously that degenerate primate you’re teaching doesn’t have the coordination to properly wield a rock. Proceed at your own risk.

My son is studying intelligence in non-primates, corvids specifically. I’m hoping that by the time he gets his degree, he’ll have animal companions who can talk and follow him around. I expect to hear a crow’s voice for his answering message.

My spouse and I did nothing to teach the crow anything. It had some peculiar behavior, including being very curious. One of the things it did was take oranges, roll them away from the tree and open them up. The other crows open the oranges haphazardly, mostly making a hole and taking the pulp. Number 12 opened up a large hole and then opened another orange, and then another. During the day it came by and “harvested” the insects feeding on the orange. We live near a doughnut shop, and it did the same with doughnut bits, forgoing the easy food for the insects. It also “experimented” on different objects with water. Birds softening up food in water is nothing new, but Number 12 put all sorts of things in in the water, plastic sheets, dried foods, bones, etc… Really neat behavior.

I don’t want to anthropomorphise the animal, it is a wild animal. We really liked the crow and it’s interest in us.

The band of crows that comes by most often also has one odd member, a sea gull. I have photos of the gull somewhere. It must have imprinted on the crows. Half of the crows seemed to pick on it, the other half spent time intervening and feeding it. Really weird. The gull is now full grown, but still flying around the neighborhood with the crows, and doesn’t seem to elicit the same response that the other seagulls get from the crows, which is they are driven off.

You’re lucky that one that smart liked you. They can be a bit of a pain in the ass if they decide to mess with you.

When I was in school, the house I lived in had two large redwoods that the crows liked to gather in to roost at sunset. Noisy and raucous, but there’s noting as cool as a large cloud of noisy crows. I used to feed them mealworms thrown by the handful onto the roof (had them in bulk for lizards), so I guess they liked or at least trusted that I was the food guy. My neighbor was a cranky old guy who didn’t like the noise or occasional poop mess. He’d go out and shake a broom at them, and shoo off any crow that landed on his lawn. I think they figured out that he particularly freaked when they pooped on his car, and didn’t like him much, so guess what happened pretty much every evening… The cars in our driveway. Never any poop. And of course we weren’t too fond of cranky neighbor either, so I made sure to feed the crows every day

Reminds me a bit of a classic greentext 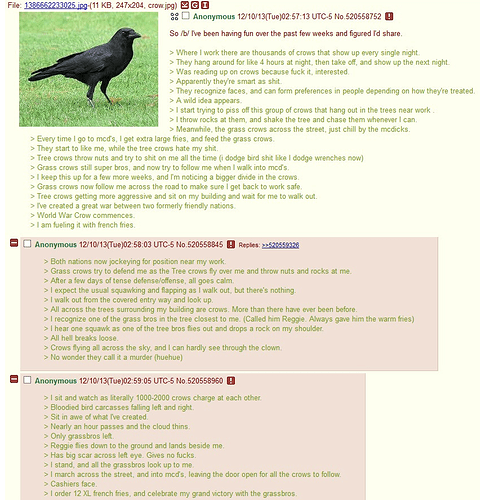