Before Elon bought Twitter, Eisner award winner Erica Henderson posted a thread there while watching that movie. It sounded like quite a thing.

ETA: I found the drawing she made. 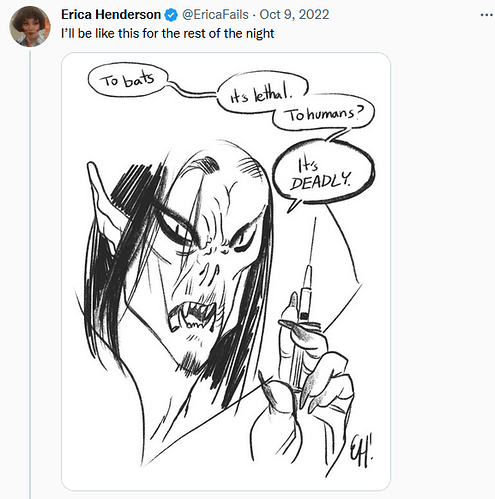 Despite the bad press, the trailers looked good, so watched it. After all… “How bad could it be?”

For my part, it’s like the entire film was made of trailers. No depth or character development, pretty much everything just moves from one scene to the next, in 30 seconds or so. Like if someone just wanted to make, “90-Second Trailer: The Movie”. All sizzle and no steak.

Looking back through that thread (I haven’t seen the movie), I noticed someone replied about the chess consultant (Phil Makepeace) later. 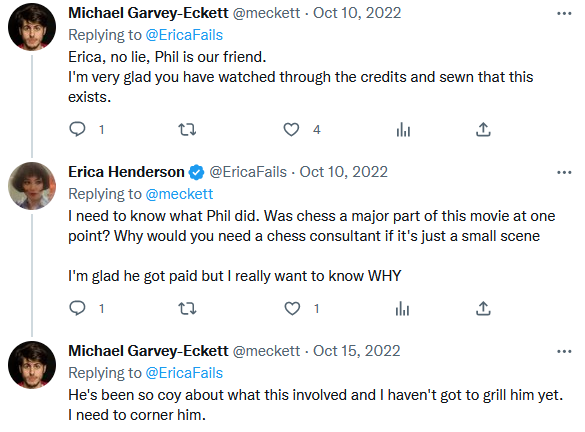 In my experience, Morbius as a character isn’t well suited to chess. He seems built around the hunger, not quiet manipulation over an unnaturally long life. He’d be more likely to break the pieces/flip the board… or did they just pay someone so they could appropriately use, “checkmate” in a sentence?

I watched this because of how bad people said it was. Not gonna lie, it’s fun to be a part of wincing at that trainwreck of a movie.