How does one go about piling up paint?

I hope somebody adopts that little guy very soon. The amount of paint the poor creature is ingesting from grooming himself and inhalation must be astronomical. And even the latex paints are chock full of toxics such as mercury, formaldehyde, cadmium, VOC’s and even lead (though in much smaller quantities these days).

I hope nobody let’s captain Kirk anywhere near it… :+0

Obviously, someone made the Incredible Kitten Hulk angry.

And even the latex paints are chock full of toxics such as mercury, formaldehyde, cadmium, VOC’s and even lead (though in much smaller quantities these days).

Mercury, cadmium, lead? The pigments containing these are not used for ages anymore and the preservatives and antifungals are using organotin and other not-horribly-toxic elements if they use metals at all. [Citation needed], please?

Edit: Too bad it was not a luminous paint. That’d be shiny!

How does one go about piling up paint?

no linky : no looky

it’s a book, you know, on paper

Tell us more about this… boo-ok? 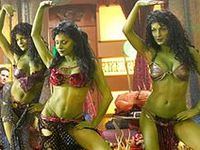 I have no idea what Bulgaria’s environmental protections are specifically like, but globally Cadmium pigments are still in use:

(Reuters Health) - Even as the US lowers the lead levels allowed in paint dramatically, paint with dangerously high lead levels is still being sold for household use worldwide, putting hundreds of millions of young children at risk of permanent brain...

and while mercury is much less common, you can still get it in PR106 Vermilion (sometimes spelled vermillion) is both a brilliant red or scarlet pigment originally made from the powdered mineral cinnabar and the name of the resulting color. It was widely used in the art and decoration of Ancient Rome, in the illuminated manuscripts of the Middle Ages, in the paintings of the Renaissance, as sindoor in India, and in the art and lacquerware of China. The word vermilion came from the Old French word vermeillon, which was derived from vermeil, from the Latin vermicu...

I am wondering about terminology in the translation. Paint is typically pigment in a solvent or water based suspension - ie a wet product, although I guess there are those elementary school tempera paint pucks which are a dry solid ? I have an easier time believing that the cat has been sleeping in or around a storage container where either the pigment was stored - or where dry dye(for textiles, etc.) was kept. It is also odd that the cat is very evenly colored except for a small strip on its back. I would expect to see some loss of color where it grooms the most - face, paws.

Despite this it looks very healthy.

How many piles do I need to paint a house?