Having go to The University of Michigan it is hard for me to think of the Hash Bash as something worth reporting. I heard that in the old dazes a think haze would cover the diag from everyone smoking joints. In the last 70s/early 80s the haze associated with the Hash Bash was gone, I had the impression it was mostly high schoolers drinking alcohol. The Hash Bash was originally a protest against the marijuana laws and eventually possession become a ticket, if the police even bothered with that.

doesn’t “The Playground Pooper” have a better ring to it? They can’t even think of good names for culprits these days.

Yes this has to be intentional, because pooping on a slide can’t be easy, not like launching an air log off the swings.

Oh sure, these are the stories you cherry pick from my local blog.

Pro tip: If you live in Ann Arbor and your only source of local news is AnnArbor.com, then the only crime that happens, happens in Ypsilanti. Really, nowhere else. If you get your local news from the Observer, crime happens everywhere. Because it does. /rant

The pooper is probably just an engineering student doing research on their waterless toilet design.

If anyone did the cherrypicking, it was the newspaper. Both stories on the front page? Directly following one another. Yup. Imma blog that.

I don’t know. I rather like the sound of The Ypsilanti Mystery Pooper.

For some people outside the Mitten, you can try to describe your town in relation to Lansing. For others, the only question is “how far from Detroit?” I have mixed feelings about Lake Erie being the new point of reference for something like Ypsi or Ann Arbor.

Yeah, yeah. They only print a couple days a week, I only see the online version, but these two stories were not posted on the same day. Hash Bash was on the 5th (I’m pretty sure I saw it last Monday), and the pooper thing has been on-going for the last several weeks. Figures they’d put 'em in the print edition right next to each other, being consummate profeshunals, and all.

What about the anonymous Good Samaritan who runs around in a cape and mask making sure all the slides are poop free? The Ypsilanti Mystery Super Pooper Scooper?

Shout out to Sam Brown, I shit you not, in Fairbanks who wanted to kick the mystery shitter in the ass so hard he never came back. When he managed one of the hotels in downtown Fairbanks, 20 years ago, someone would come and take a dump in the halls around 10-11pm most nights. I don’t know how they managed, but Sam was the one who had to clean this up.

Oh, and then there used to be a fellow in downtown Portland, OR who would sculpt his feces. For viewing. Fecal art.

This is more common then one might believe, and infuriating to the rest of the world. Its gross but they’re around. Just remember, it is just one long tube from our mouth to our anus, it really never has been inside a person biologically.

I shit you not,

What you did there. I see it.

Shout out to Sam Brown, I shit you not, in Fairbanks who wanted to kick the mystery shitter in the ass so hard he never came back. When he managed one of the hotels in downtown Fairbanks, 20 years ago, someone would come and take a dump in the halls around 10-11pm most nights. I don’t know how they managed, but Sam was the one who had to clean this up.

I think that he might have moved on to Ontario… 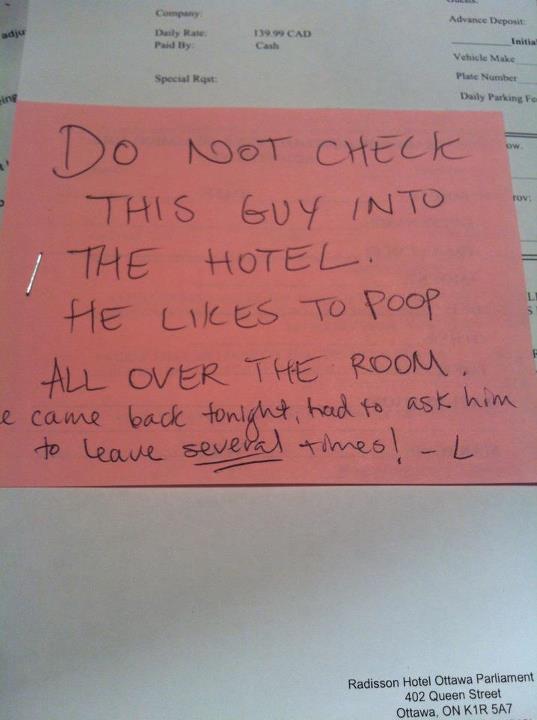 One would assume that’s the John Sinclair who was the manager of MC5 and was the reason for the first Hash Bash. From his Wikipedia entry:

After a series of convictions for possession of marijuana, Sinclair was sentenced to 10 years in prison in 1969 after giving two joints to an undercover narcotics officer.[6] This sentence inspired Abbie Hoffman to jump on the stage during The Who’s performance at Woodstock to protest. It also sparked the landmark “John Sinclair Freedom Rally” at Ann Arbor’s Crisler Arena in December 1971. The event brought together luminaries including rock musicians John Lennon (who recorded the song “John Sinclair” on his Some Time in New York City album[7]), Yoko Ono, David Peel, Stevie Wonder, Phil Ochs and Bob Seger, jazz artists Archie Shepp and Roswell Rudd, and speakers Allen Ginsberg, Abbie Hoffman, Rennie Davis, David Dellinger, Jerry Rubin, and Bobby Seale.[8][9] Three days after the rally, Sinclair was released from prison when the Michigan Supreme Court ruled that the state’s marijuana statutes were unconstitutional.[10] These events inspired the creation of Ann Arbor’s annual pro-legalization Hash Bash rally, which continues to be held as of 2013, and contributed to the drive for decriminalization of marijuana under the Ann Arbor city charter (see Cannabis laws in Ann Arbor, Michigan).

A couple of years ago I was back in my home town in Ireland, just outside of Dublin.
The local paper there is called the Liffey Valley Champion and there was an article about this exact same thing happening in a playground in the town of Maynooth.
Seemingly the same person may also have been pooing into golf holes, so when you’d pick the ball out, you’d get poo all over you hands, I believe the Police were going to DNA type both shites and see if it was the same person.
Maybe its a thing?

I was an undergrad at UoM for the first three Hash Bashes, and remember them fondly (so perhaps I was doing it wrong ; -) I still enjoy hearing about it every year…the only “college tradition” I ever truly took part in. (Maybe football counts as well – back in the day, students got free tickets to home games. Tickets were transferrable, so I’d sell mine and use the cash for books. Go Blue!)

Those first bashes were great – great cause, great people, great hash. It was a very novel experience at the second one to sit in the diag as a teenager, smokin’ down with my state rep (Perry Bullard?) Also, vague memories of a Sun Ra show…

In the late '80s I was a reporter on the west side of the state. As though a switch had been flipped, college students got back into public drunkenness in a big way – property damage, ODs, assaults on kids and cops, very messy. Virtually every authority figure I interviewed, from college deans to police captains, would privately tell me that they longed for the “old days” when kids smoked pot – along the lines of, “the worst problem from pot smokers was that music might get too loud, and you controlled that by simply knocking on their door.” Sad to think of the Bash going down that same road.

It’s fairly commercial these days. Kids come in from Brighton as though it’s some sort of grand act of Rebellion, no one smokes anything on the Diag because the State Police will gleefully bust you for felony possession, and Townies avoid it because too many streets are closed downtown. Honestly, I haven’t bothered in a decade or so, it’s just not that interesting. Besides, the first Saturday in April is often a really nice day. I’d rather do yard work than deal with the clueless tourists.

Well, that’s a shame. I still trek to A2 for shows and lectures (and the occasional Egg Drop), but these days the appeal for me is mostly in Nichols Arb…that still hasn’t been screwed up too much. (My sole fond memory of Brighton is that it marks the ramp for getting onto southbound 23 ; -)