Do farmers play this game?

Yes, what we need is more and cheaper tree-flavored sucrose on the market.

Don’t get me wrong, the stuff is good… but I can’t help thinking the following words:

Sure, but I don’t see this process of industrial extraction expanding the supply of high quality delicious, delicious maple syrup. Instead I see it flooding the market with cheap watery crap sweetened with HFCD, to the point where most current producers go out of business and eventually watery HFCS crap is all you can get - unless you happen to have a couple of trees in your back yard and tap them yourself. Then, in 50 or 60 years artisan maple syrup will become all the rage, and connoisseurs will spit the names van den Berg and Perkins.

[quote=“JonS, post:24, topic:20136”]
Instead I see it flooding the market with cheap watery crap sweetened with HFCD, to the point where most current producers go out of business and eventually watery HFCS crap is all you can get [/quote]

that is quite a scenario. How many villains working against you would be required, do you think?

OK. Here’s essentially what’s available at one of the local grocery stores. Your flag makes me think that perhaps you aren’t familiar with the US market.

Gluten free. Lactose free. Vegan. Made with 2% real maple syrup. We guarantee it! - The Wegmans Family.

One interests me. The other, despite the discount, does not. And yet, Maple Syrup is a common ingredient.

Personally, I will only buy ‘free range’ maple syrup. Trees deserve a decent life too!

America's Most Entertaining Cartoon About A Tree.

When’s the last time you gazed out upon a grove of syrup-producing maple trees?

I see syrup-producing maple trees all the time, but that’s because I live in a rural area that produces maple syrup. There’s not exactly a lack of public trails in the area.

I feel the need to cite some basic chemistry. Plants use Sunlight and bleh! tasting chemicals to create sometimes delightfully tasting chemicals like sucrose. If you eliminate the plants ability to collect solar energy by chopping of all its leaves, I would venture a guess that you might compromise the taste a bit.

None whatsoever. Just Smith’s ‘invisible hand.’ It’s not that far fetched, either. In addition to beer and bacon, look at what’s happened to apples and tomatoes.

Sap for maple syrup is drawn late winter/early spring before the trees leaf out.

Are you also offended by this wasted landscape of high-yield wheat? 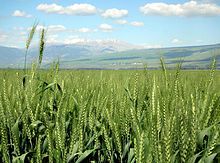 You’re a few thousand years too late to be upset about agriculture.

One interests me. The other, despite the discount, does not.

Sure. We have - broadly - the same kinds of options here, and I make the same choice as you. Yet, someone is buying the Pancake Syrup, otherwise it wouldn’t be on the market. And in other, similar, markets the low cost/low quality products often drive out the higher cost/higher quality ones.

The last time I gazed out upon a grove of maple trees was … hmm, let me see if I can remember. Oh yeah, it was this morning.

I’ve also walked public trails through maple groves used (in season) for sap collection. It’s not one or the other.

Also, I don’t care much if maple syrup stays expensive, if this experimental process turns out to be unsustainable or otherwise has negative effects that outweigh possible profits. It’s not like people are dying from starvation if there’s a maple syrup shortage.

I’m not sure you’re getting what they’re doing:

And it took them this long to figure that out?

So the question is, after they’ve chopped the top off the tree and used it like a straw to suck up water from the ground, is the resultant syrup still going to be called 100% Maple Syrup?

Or after the sap that was in the tree is retrieved, the rest of the stuff pulled out is more like dirty water, and they end up adding sweetner to it, do they still get to call it Maple Syrup.

And in other, similar, markets the low cost/low quality products often drive out the higher cost/higher quality ones.

But they haven’t here. And I don’t understand why the ability to produce the essential ingredient (“pure maple syrup”) more cheaply will drive containers of “pure maple syrup” off the market. Are a substantial portion of maple syrup consumers turned off by the paltriness of “two percent” or “five percent”? Would they consider a “50/50” mix of HFCS and maple? I doubt it.