New edition of The Book of Miracles, the 16th century's premier guide to the apocalypse

To help expedite and focus this discussion, I suggest that we not consider the ‘Apocalypse Now Bar’ (in Vietnam) to be, in any way, a candidate as far as specific revelations.

The new edition from Taschen

I looked for it in the archives expecting to find it covered already, but nothing showed up for some reason. Got a link?

Dude, the link goes to the older, more expensive edition:)

Renaissance obsession with signs, portents and the damned weird.

I’d ordinarily think that ‘damned’ is an intensifier, but in this case, I think it’s precisely the correct technical term for the sort of weirdness that’s on display here.

Dude, the link goes to the older, more expensive edition:)

Edit: I was assuming that a lower-priced new edition would necessarily be paperback, but apparently not. It will be fewer pages, looks like.

I feel like I have seen these illustrations used in another book.

I looked for it in the archives expecting to find it covered already, but nothing showed up for some reason. Got a link?

I can’t find it myself, but I was sufficiently inspired at the time to steal some of the images. 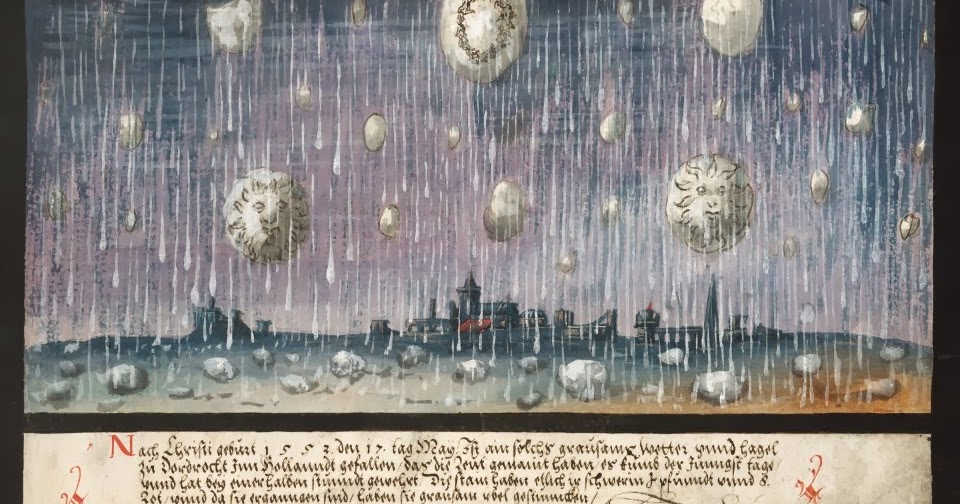 Today's weather report is brought to you by the Nuremberg Chronicle Colour...

A freak fall of hailstones with the faces of lions pelted the Old Town soon after lunchtime, causing widespread damage to skylights, crops a...

Technically the book itself is the apocalypse, so in this case The Book of Miracles is an apocalypse, which I think is the point you are making.

If we’re being literal almost any textbook is an apocalypse (it uncovers that which was concealed) so I guess The Apocalypse of Java 2 APIs would be a perfectly valid book title. So would The Apocalypse of Trump’s Dealings with The Russian Federation, and that might be even more bizarre than the Apocalypse of St. John.

As a side note, the Christadelphians* (like the Jehovah’s Witness but without the nonexistent word in their name) seem to believe that Erich von Daniken had a revelation which revealed how the events in the Apocalypse of John would come about.

Van Daniken was barking, but on the stopped clock principle the Solar System has turned out to have far more in the way of hydrocarbons than was supposed at the time.

*Truly bizarre sect. When I came across them they were predicting the imminent end of the world, but one of their members was clerk of a magistrate’s court and was therefore continuing to set the calendar for hearings dated long after the end of the world.

Do they have any illustrations of the Trump of Doom? (please no blowing of it)

“Eh, it was pretty repetitive. I doubt anyone read the whole thing. We can just cut out hundreds of pages and nobody will notice” – a Taschen executive (probably)

So this is where the POTUS has been getting his ideas! And he got it from Bannon, more’n likely.

No, but I bet that’s all he could truly understand in the book.