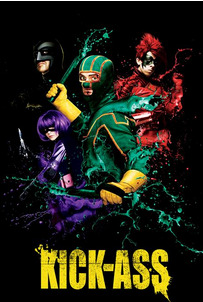 The excellent Jon Ronson wrote an article about Jones a few years ago. The story about Ronson going with Jones’s crew one night where they have a stand off with some drug dealers is so vivid in my memory I thought I’d seen it on TV.

or were they just making things harder for police?

He once decided that the best way to respond to a group of people arguing in the street was to insert himself into the altercation and start pepper-spraying people. So maybe he should have just been a cop after all—at least that way he’d be getting a paycheck to brutalize people.

There’s a daycare in my neighborhood that has a mural on their fence that includes a portrait of Phoenix Jones. I walked by it over the weekend and wondered what happened to that guy—thanks for posting this!

Lovely. I can’t say that I’m a fan of either side.

Chris from Comic Tropes has a casual telling of his time with Phoenix Jones and his short stint as one of the real life superheroes. It is a pretty good listen, IMO. It has some history, but is more of an informal recounting of his time there and the history of Jones.

Do you want to get Rorschachs?

Because THAT’S how you get Rorschachs.

I was just coming to post about that, with my limited ability to recall information I still think I remember the most heroic thing he and his associates would do would be to hand out sandwiches to people who needed them on the street

There will be no real life superheroes until someone develops a bulletproof, knife proof, see through for the eyes and mouth material that is easy to tailor into a cosume or uniform. No amount of fighting skills can protect you from a bullet. And don’t forget the feet. A bullet through your foot pretty much takes you out of the fight.