Tom the Dancing Bug, IN WHICH a historical “News of the Times” reports F.D.R.'s dismissal of the Pearl Harbor attack as a hoax

Found it by looking very hard at the thumbnail: 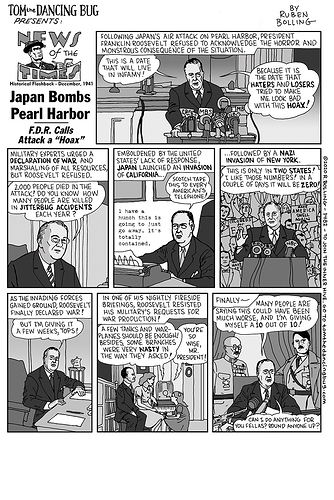 Ah, okay. So it was just a webpage error? I thought I missed some satirical spin. All that came up was an advertisement for the book collection. Was wondering if that was some kind of sociopolitical statement that whooshed right over my head.

Anyway, I’m not so sure about some of the parallels in the comic. It’s not like any president in recent history would ever turn down the chance to spend more money on military.

Having known about Japan’s plans to attack Pearl Harbor that would be a better analogy here. The idiots currently occupying the WH knew well in advance that COVID-19 was coming yet did nothing.

Seems like it’s a error yeah, in the code for the page it shows a place where the comic would go, but it’s got no url for the image listed.

I had the same double-take, but it seems like a error.

This happens every week, doesn’t it?

“So I say, ask not what your country can do for you. Ask what you can do for me.” -DJT

Oh now this is a burn! 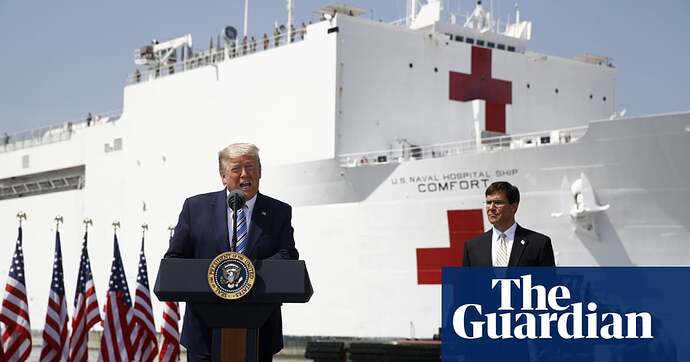 Trump “leads” the way a Judas goat leads. At the end of the road, his followers will discover a unpleasant end and he’ll saunter off into the sunset, unencumbered and carefree, his pockets nicely lined.

There are a few things to remember here. In a crisis, a president’s favourability ratings tend to rise. Happened to Bush Sr. when he started a war, happened to Bush Jr. after Sept. 11, even IIRC Obama got a bit of a bump in the early days of the great recession. However, the Bush’s approval shot up into the 80s, Carter almost got there in the early stages of the Iran hostage crisis. Their approval ratings dropped steeply in the following months. Trump’s approval is up to about 45% on aggregate, though a few polls show that he’s closer to 50%. So take the current pro-Trumpism with a large spoonful of salt.

What’s really interesting is that the Republicans have lost ground in the generic ballot since the start of this crisis. On aggregate there is a 7.7% spread between Dems and the GOP on the generic ballot. On March 1 it was 6.5%. (numbers according to fivethirtyeight.com averages).

So Trump is popular relative to a month ago, but relative to other presidents enduring a crisis? No. It’s also quite possible that some voters will say “he’s done an okay job handling Covid, but I still won’t vote for him in November”.

It is pretty amazing that Trump actually casts himself as a “war president” while simultaneously doing nothing. I kept imagining political cartoons with Trump cowering behind sandbags waving a white flag when confronted with the coronavirus, but this is even better.

Hilarious, given I am assuming from the avatar you’re British.

I’m not sure why you respond to me with something supposedly showing approval for him, so I take this as you think he’s doing a good job?

The man in this very cartoon and my country helped liberate you from the Nazis, and men who Trump is acting like, as people were inciting the same nationalist irrationality as during WW2.

All while your own pigheaded empty ballsack of a prime minister is doing the same schtick, and he himself has added to the infection by ignoring science and continuing to spread the disease, less sane than some mental patients.

I think you’re out of your element with Donnie, Donnie.

Chillax, Random. It’s an interesting piece, and not at all pro-Trump. There’s an interview of someone (wait for it) who thinks the media is unfairly not presenting the whole case, and has had to close her cosmetology school. And she considers the unprecedented bailout to be “leadership”.

Pieces like this always drive home that we really are fighting two infections in this country: nCoV-2 and stupidity.

It stands to reason; you don’t want to change Captain in mid-voyage. Just ask the passengers and crew of the Titanic.

@RandomDude I took JonS’s post to be more along the lines of “Oh my gawd, what does Trump have to do for the voters to be see him for the shit-heel he is?!”

PS: That I think that is an Australian Flag or maybe Anguilla, the Falklands, or the Cook Islands, or OMG, I never realized there are so many flags with a Union Flag on a field of blue! Okay, maybe New Zealand.

As others have noted, you really mis-read the intent of my post.

You said: “wow, what a burn [this cartoon is]”
I responded: “there are a bunch of people who think he’s doing a GREAT job. The GREATEST.”

Unstated, because I thought it was obvious, was: “I agree with you, but there are plenty of people who don’t.”

Incidentally, you mis-read the avatar - the UK flag looks very different to the one in my circle. You also mis-read history. The US very much did not “liberate [me|my_country|the UK] from the Nazis.”

There’s a lot of evidence made public now that F.D.R. knew it was coming and made sure it did. 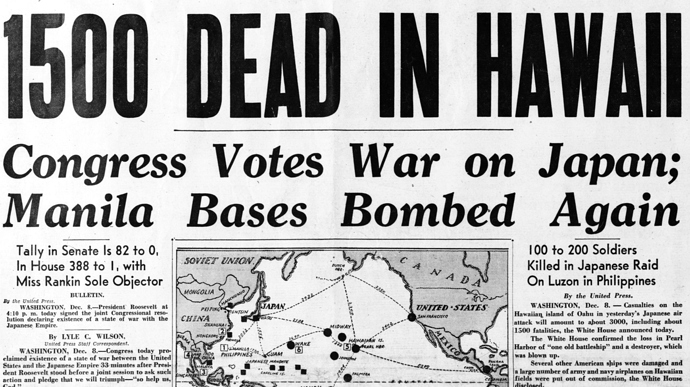 No, FDR Did Not Know The Japanese Were Going To Bomb Pearl Harbor

There's no evidence to support it, but the conspiracy theory that President Franklin Roosevelt knew beforehand about Pearl Harbor refuses to die, to the consternation of World War II historians.

The Pearl Harbor advance-knowledge conspiracy theory is the argument that U.S. Government officials had advance knowledge of Japan's December 7, 1941, attack on Pearl Harbor. Ever since the Japanese attack, there has been debate as to how and why the United States had been caught off guard, and how much and when American officials knew of Japanese plans for an attack. In September 1944, John T. Flynn, a co-founder of the non-interventionist America First Committee, launched a Pearl Harbor c Sever...

Absolutely 1000% agreed- so lemme shout it from the rooftops-

Im not perfect in the least, and right now personally I am navigating a giant shitstorm of a personal hackerspace PPE Drive being fucked up in part because of me in large part because of the person organizing it.

I never imagined my life would become this complex but I definitely screwed up here.

Sometimes parsing is needed to understand what is replied to, with my distractions I just wasn’t intelligent enough to meet that here, my apologies.