When I post on the birdsite about 45 and the TGOP, I use TheResistance as a hashtag. Scary to think that I could be shot for speaking out.

So should we show up at Comet Ping Pong with our guns this time, or just cary them around everyday shooting at people who read the NY Times?

Me thinks the Reich Wingers are getting scared.

I thought that from their rhetoric that Republicans had a long standing relationship with fear.

Should be easy to counter this.

Just make it clear that your concept of “Resistance” does not involve physically attacking people whom you disagree with.

If on the other hand “Resistance” is a romantic fantasy about blowing up shit like the real “Resistance” - the Maquis circa 1943 - don’t be too surprised if someone takes it seriously.

Hmm… My first thought while watching this was, “Maybe I should buy an assault rifle.” Makes me wonder if it’s actually a fiendishly clever campaign intended to open up new markets by selling guns to liberals.

Whoa, this shit radicalizes just like recruiting videos for ISIS.

I’ve always felt that the argument for US gun-ownership to help overthrow a tyrannical government was a poor one. In a democracy, if you’re reduced to armed warfare against your own government, you’ve already lost. Lately I’d been thinking that given the politics of the average US gun-owner, and their response to authoritarianism, they’d likely be on the wrong side of that anyways. This is the proof of that, and the nail in the coffin of that whole “guns save us from tyranny” argument.

Should be easy to counter this.

What, ith facts? If these people had any relation to facts, you wouldn’t need to counter it.

You know, there’s something to what you are saying. After T was elected, I actually had the thought that maybe we should have a firearm in the house for when the radical right instigates a coup.

I don’t see that either the left or the right here has a monopoly on “not pretending to be tough guys”. We are still a long long way from seeing the Rotfront mixing it up with the SA, but there are a few on each side who definitely have their little fantasies.

Propaganda, fearmongering and dog whistling all in one ad. Includes a dig at Obama while defending Trump, validates police violence against protesters and encourages gun sales.

As one of those unicorn progressives who also isn’t a huge fan of outright gun control — THIS IS THE KIND OF SHIT THAT KEEPS PUTTING ME FURTHER AND FURTHER FROM THE NRA! FUCK YOU WAYNE LAPIERRE AND COMPANY FOR RUINING THE NRA!!!

Ok, now that I’ve caught my breath – I reiterate that if they went back to the goals they had when I was a kid – which also involved a lot of gun safety training, demystifying guns for the average person, hunters safety and conservation, etc. instead of being reactionary assholes picking the wrong people to stand behind (any school shooting vs. someone like Castille), things would be very different right now.

The ILA, their lobbying organization, took over the whole thing and is just a funnel of money straight from large gun manufacturers and other related companies straight to the Feds and State Govts., with some detours to horrible ads and the top people dipping their hands into the pipeline.

I wonder if there’s a similar organization that is the not crazy, not corrupt version. I mean if there are counterparts to Greenpeace and PETA that actually get things done without being nuts, the NRA has to have one too, right? Right?

have a firearm in the house

you know, i just don’t think i’d be much good at shootin folks - and then someone who’s better at it would shoot me - how long could the whole exercise last?

recalls Octavia Butler’s Parable of the Sower - a fucking senseless, doggie-dog mess that world was 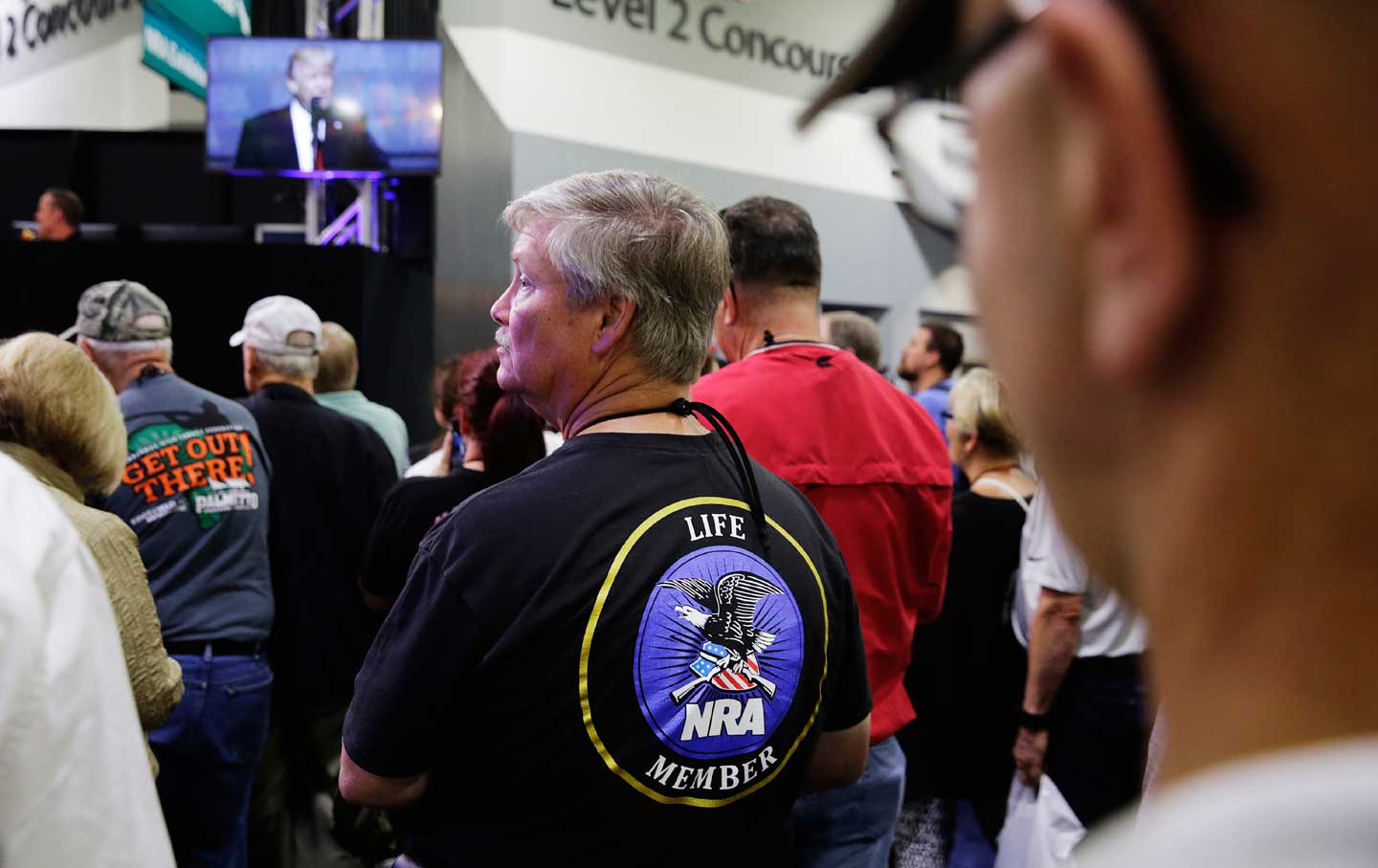 Gun Sales Are Plummeting and Trump Wants to Help

The NRA’s new playbook includes guns for kids and open carry in every state.