NurturePod: the future of parenting

“We thought the machines would revolt. We were wrong. They turned us against ourselves. We used them to raise our children; take care of our elderly. Before you knew it, they had a whole army of humans who loved the machines - the only things who showed them love back. Once that devotion was locked into place, it was only matter of time before flipping the switch.”

No auto diaper changer? What are we in the stone ages?

NARG. I was expecting a podcast with nurturing tips (aka parenting lifehacks), but apparently, the cake is a lie.

Seriously, it shouldn’t be this hard to find a Venture Bros. image of their sleep pods!

I’ll see myself out

Anybody remember that old Star Trek ep where a human baby was raised by a technologically adept telepathic race with no concept of human interaction, and how years later that child was ‘rescued’ by the Enterprise crew?

Remember how “well” that worked out?

We’re now supposed to consider a capital “T” to be a holy symbol, so why not.

To be fair, if he DIDN’T have telepathic powers that allowed him to kill at his whim, he wouldn’t be much worse than some people at work…

Not just telepathic powers, now that I think about it; he also had the power to manipulate matter, like the girl whose face he made disappear.

But seriously though, there are numerous studies about how babies need affection and physical intimacy in order to develop properly; there’s just no substitution for that.

By the way, that egg-chair thing is just an out of the box baby rocker.

I suppose the fact that this is on display in Belgium makes it more difficult for 4moms (the company that makes the mamaroo) to protest? Not that I don’t value remix culture, but it’s difficult to see what’s been “created” here, other than a clever narrative.

In fact, Fisher Price already makes a rocker with a projector inside. Its design, however, is less “space-age modern” than the projector-less Mamaroo, making it less useful for reappropriating for post-modern sensationalist chicanery. 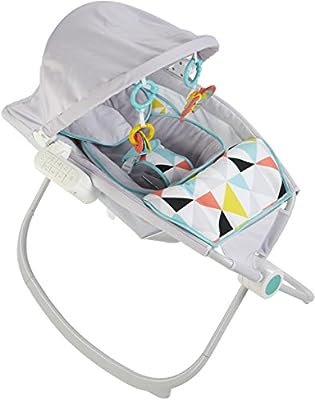 Send your little one off to dreamland in serene comfort with the soothing rocking, calming vibrations, and innovative projected light show of this cozy sleeper. With up to 20 minutes of tranquil tunes ...

And it has nothing on a Snoo.

I was thinking the SAME thing!

Does it have Lions?

I am the new Number Two…