C’mon, Mark, you could have at least included a recipe!

Then next time I find a discounted tin of barnacles on the dented-can shelf I’ll know what to do with it.

Barnacled eggs and bilge-water soup on Sundays, brings back the memories, it does, it does.

Nylon cookware, in general, is quite useful, unless it’s stick on a fragile wooden or bamboo handle.

Looks like yet another kitchen utensil that our big puppy would eat in 3 seconds if he had half a chance. Especially if it’s covered with barnacled egg residue.

pretty cool. My sister-in-law keeps an old credit card by her kitchen sink for this purpose (to scrape food, not to buy kitchen tools)

We have one of these, it seems. Found it in the drawer the other day. Had no idea what it was.

Also useful for scraping the inside of aquariums…

Nylon pan scraper is polycarbonate…
Or is it for scraping pans made out of nylon?
Ether way, very useful things.

After using these for several years, I really get confused when I’m doing the washing up in someone else’s kitchen and they don’t have one.

Besides the use of scraping off hard, difficult-to-remove stuff, it’s also great for the opposite: sticky wet stuff that doesn’t come off under the faucet alone — like now-gluey egg remains, or thickened tomato sauce — which ends up clogging the sponge and making it all yucky. A quick scrape with this and it’s all down the drain.

This is my type, I like the ridge on it:

For cleaning cast iron, nothing beats chain mail. (Note: I am not the guy in the video).

I keep a separate one in my car to scrape off tree sap and bird poop that escaped the notice of the car wash.

They’re a humble £67 on UK amazon. Is that a new way in which something is boingboing’ed? That enough of us looked it up on Amazon UK after reading Mark’s post and then some algorithm pushed the price up? 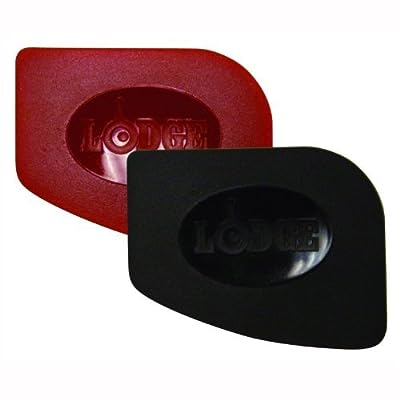 From Lodge, maker of rugged cast-iron cookware, the Durable Polycarbonate Pan Scrapers come in a pack of 2 and make cleaning the stuck on food from cookware a breeze. Moulded in rugged Polycarbonate d ...

I have that exact brand. Works great, and washes up so easily in the dishwasher. Works on a lot more than just cast iron.

I have one of those. I didn’t know it was a scraper. I thought it was for scooting around the edge of a baking pan to pop out the contents.

If you get a decent scrub brush, it comes with a scraper built in. Might not handle the corners as well, but I’ve never found the need for a separate scraper.

hmm, well, burnt food (black, dark brown, impossible to remove without scratching) is best removed with soda (sodium bicarbonate, if I’m not mistaken): cover the floor of your pan, add a little of water, place on stove, cook for 10-30 mins, and a simple brush will remove the stuff without any scratching…

We also had a plastic one for years, but I have to say, our new bamboo one is even better. Mostly because it’s less ugly in the bowl of dish washing accessories. Someone gave me a bundle of twigs tied together with something like twine (not kidding) which is the single best scrub brush I have ever known, but I haven’t been unable to find it again since, so I keep it in reserve for only the really most horrible pots. They are apparently magical twigs, like very fine branches of curly hazelnut. My attempts at recreating it have been comically bad.

I admit, I use “unbleached” sponges with loofah on the scrubby side though, so I clearly care way too much how my dish washing tools look.