Obama to schools: let transgender kids use the bathroom matching their gender

You lousy Americans! Use the proper British/Canadian spelling of transgingre!

I’ve seen some shit surrounding bathrooms in my early transition, but the public focus on transgender folks has really ratcheted the violence up. Used to be you could slip in, and folks would think maybe? Maybe not? and leave you be. Now, folks are so quick to play some weird game of Where’s Waldo with trans folks, they are pointing out people who aren’t even trans!

I’m really glad this is all happening, but the violence and threats are at an all time high. (Worse for trans feminine folks, and worse for people of color.)

Oh, women’s rooms can get pretty nasty, too!

The Fort Worth school district recently came out with a policy instructing district schools allow transgender students to use the bathroom which conforms with their gender identity. If a student feels uncomfortable using the bathroom with a transgender peer, that student must be offered a single stall restroom to use. I like that part.
The Texas Lt. Governor is having a loud and public fit. He’s calling for the superintendent to resign. Some people think his outrage is fake, just a political move. 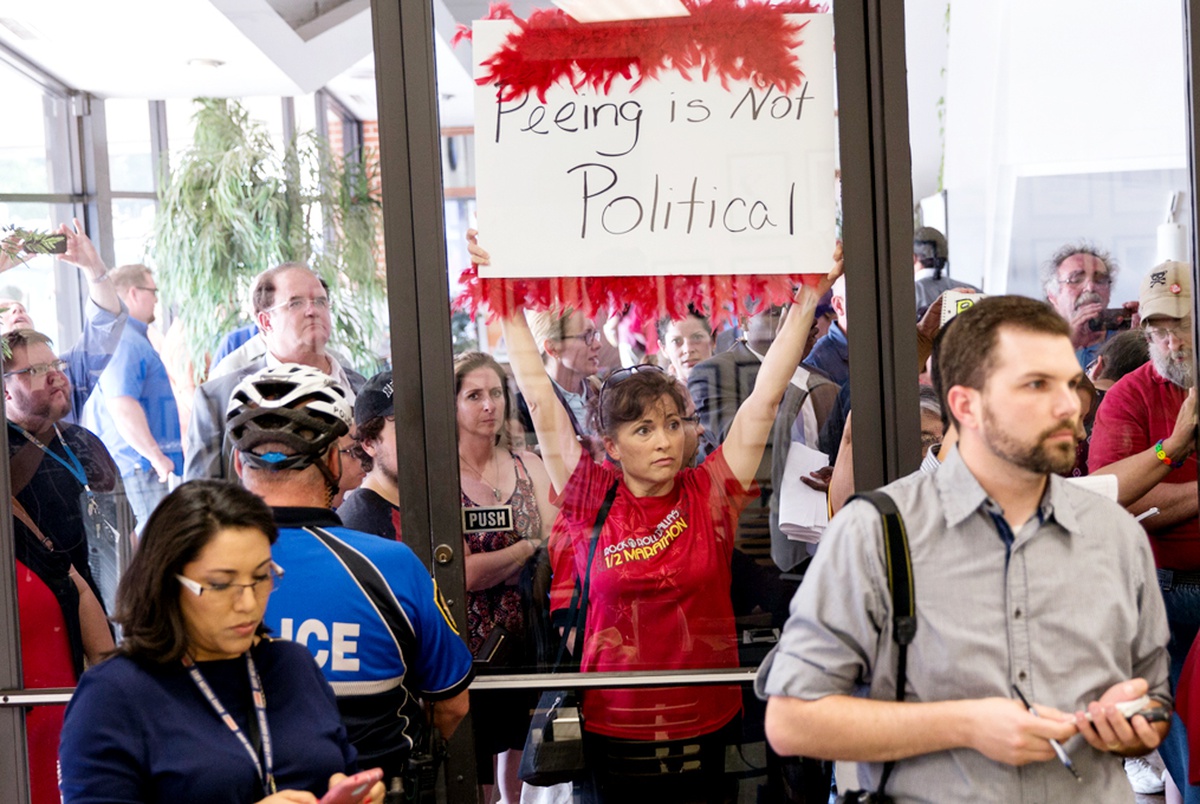 Transgender advocates derided Lt. Gov. Dan Patrick on Tuesday for what they described as his “fake outrage” over the Fort Worth school district’s new transgender bathroom guidelines, calling the Republican a shameless...

Yeah. Toilet clogged because of tampon… water, feces, urine, and blood on the floor. Ick.

I suggested to my wife, when the topic came up on the tv, that we go with the standard of public/open hand-washing area and private floor-to-ceiling stalls with toilets. I saw this at a restaurant in NYC once and thought it was the perfect solution. And then it dawned on me … this is exactly what they do at festivals etc with porto-o-potties. There are “stalls” and then hand washing / sanitizing area off to the side – and nobody cares about the genitals of the person on either side of them or of the prior occupants.

Anyhow she didn’t like the idea. I didn’t feel like arguing about it, but I I think she pictured a man lurking around inside the bathroom area (between/by where sinks would be or stalls are). I suppose it would make it easier for man – in a bathroom that isn’t crowded – to grab a woman and throw her into one of these floor-to-ceiling toilet rooms vs doing this in a traditional ladies only room. But … he could do the same just outside the bathroom anyhow.

Sure, it sounds “nice” and “inclusive” and being for it makes you “not a monster”, but what will happen to society if it turns out that girls have better aim at the urinals? It’ll be chaos, I bet. First the urinals, then they’ll be putting out campfires or writing their names in the snow!

What is this obsession with heteros about LGBT and toilets all the time?

The people who lost the same-sex marriage fight have got to find something to keep those big fat donation checks coming in.

I wish there were some good guidelines beyond, “use your judgement” when it comes to what you should do if you come across a problem in the restroom where a trans* person (or in the current paranoid environment, a cis person) is being harassed by people or LEOs. Usually people are advised not to escalate, though I have some anarchist friends who have no qualms there.

LEOs are probably the worst case scenario in my mind. They have little accountability, and if they’re there, depending on the state or muni, they probably have legal authority to make an arrest, and there’s no way to intervene meaningfully. A video might just provide evidence for prosecution. I wish I could say they’re at least more predictable, but I’ve learned not to count on that either.

Random schmucks? If they decide to be real assfaces and get violent then at least I don’t risk a summary death penalty with impunity if I involve myself in some way.

…one school district decided to permit students to carry weapons onto campus, with a school board member plainly suggesting they pepper spray transgender people who “follow” them into bathrooms.

Yeah, because cisgender hetero teenage boys are so desperate to sneak into the girls privvy that they are willing to fake being transgender in front of all their peers.

Typical right-wing fantasy, just looking for a reason to attack someone, or to carry weapons, at least.

Slightly off topic, but does anyone have any resources/articles/advice on raising trans teens? I’m a gay guy, so probably start out in a better position than most, but would appreciate more resources. We have a trans kiddo arriving on our home soon.

Also, if you are trans, what do you wish your parents would have done or known?

I love this concept (I’ve evangelized in it a few bbs posts myself) for the privacy, but also the public enforcement of hand-washing. The one reply that I still don’t have a good answer to is “what if you need to clean something up privately, like if you shit your pants, etc…”

Yes! Yes! Oh, wait. No one wants to shell out the cash. And people might be doing EVIL PERVERTED HORRIBLE SATAN OH MY GOD THE MIND REELS . . . wait, what was I saying?

the public enforcement of hand-washing

Love to hear your views on how to do that!