Microsoft is in cahoots with Big Electric. Or, windows proves, yet again, that it’s demonstrably awful.

So let me get this right, they changed the experience for the PC user to make it more like a tablet (which no PC user I know wanted) and then made a OS that isn’t actually good for a tablet because of the batter life??? This may be a new best definition for FAIL.

Well, I’ll be buying an SP2 shortly anyway. I liked the original one and only held off because of the old processor, and the more mediocre reviews it gets the more likely I am to buy it - I guess I feel sorry for it, or I just like flawed devices. I want the idea to work, and I don’t want two devices, I’ve tried to use a Kindle Fire and an HP TouchPad as a second machine and have drifted back to the laptop every time. Currently said laptop is an old MBP but there’s something about Apple that winds me up something chronic these days so however good they are I don’t want another (plus I do admire MS for at least trying something different with Win 8). I guess I could buy a Yoga 2 but it just doesn’t appeal. I don’t want a 13" tablet with keys on the back.

on the Mac it’s because Steve Jobs mandated a 100Ω resistor and MOSFET across the battery pack, that only a call specific to OSX’s boot-up sequence will disable. 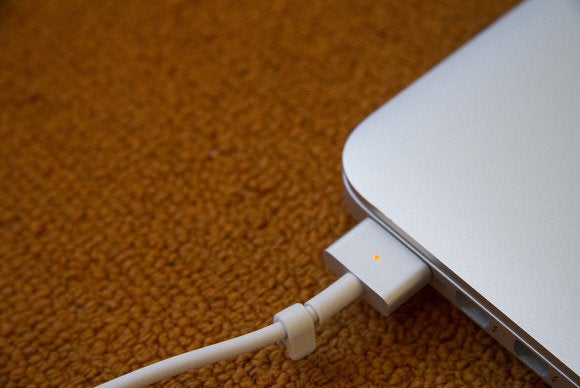 Four ways OS X Mavericks will save your MacBook's battery

Big under-the-hood changes are coming to OS X's ability to extend a Mac's battery life. Here's a quick look at how they work.

I’ll never understand why so many people use Windows. With a few exceptions here and there, it’s a pile of shit compared to Mac OS X. It took Microsoft about a decade to catch up to OS X… 10 years of fitzing around… sheesh…

Disclaimer: I have lengthy experience with both Mac & Windows. I know there’s instances where Windows is “better”, but most of the people that tell me they’re thrilled with Windows have very limited experience with Mac, are inept with Mac or are lying. And, yes, I know about Windows 7 half assed approach with timer coalescing.

My dislike for Apple is, in the most part, ideological, I’ll admit. However, I say I get a pass, as I used to do helldesk for the crazy bastards, and will never, ever use or buy their products.

What to do? Redesign the OS or buy more ads?

What I find curious is that Windows would be getting bad battery life on hardware that Microsoft controls every aspect of.

As anybody who has had the pleasure of running Linux, and facing real vendor indifference and/or incompetence can attest, ACPI power management is a steaming heap of utter fail where sanity goes to die. Odds are good that your motherboard’s firmware is utter junk, and every peripheral you add (regardless of bus, though USB seems to have a special talent), is just going to make things more painful for you. Windows has it incrementally better, because vendors actually test their shit against it, so most of the most egregious bugs are either not triggered by Windows’ behavior, or shimmed with a driver of some sort; but the situation is still pretty dreadful.

On Microsoft’s own pet hardware, though, they are in total control. They pick every piece of silicon that goes into the thing. They write, or look over the shoulders of the vendor writing, every bit of firmware, every driver, and the kernel. If they can’t do it there, why not?

By contrast, with something like the MBA, that’s comparing a situation where Apple is in total control, hardware, firmware, and software, to a situation where Windows is running on top of whatever Apple deemed ‘good enough’ for Bootcamp(which probably isn’t actively sabotaged; but I’d doubt that any heroic measures were taken).

Random OEM whiteboxes are somewhere in the middle, with a definite bias in favor of working well with Windows; but a lot of cost-sensitive 3rd parties throwing their incompetent junk into the mix and seeing what sticks.

Massive oversimplification. You really think hardware compatibility explains all of Microsoft’s sloth? Can’t you imagine it might have something to do with them being a near monopoly?

Weirdly, I’ve done the same thing for MS, and they were a lot better to work for (not to mention better-paid.), provided better training & tools, and had a much higher standard of entry for the job. You could argue you’d have to have, given MS’ well-known (and new and surprising!) failure points, but overall, I found 'em much better to work for. Apple were absolute dicks. Personally, I use Linux, but that’s a whole other can of worms…

By contrast, with something like the MBA, that’s comparing a situation where Apple is in total control, hardware, firmware, and software, to a situation where Windows is running on top of whatever Apple deemed ‘good enough’ for Bootcamp(which probably isn’t actively sabotaged; but I’d doubt that any heroic measures were taken).

Well, if Apple is “actively sabotaging” Bootcamp, they aren’t doing a very good job of it considering one of the best performing laptops for Microsoft Windows is an Apple MacBook Pro.

I’m always amazed at the amount of FUD spewed when it comes to Macs. It never ends…

Trabbies’re ok in rough conditions, same as beetles, due to their rear enginend-ness

Did you miss the part where I expressed my impression that it probably wasn’t, merely probably not all that aggressively optimized for any Windows-specific peculiarities?

Also, a table of ‘best performing’ laptops is largely orthogonal to a discussion about battery life (and it also appears to show that $1,200 and $2,100 laptops are pretty good at stomping on a bunch of bargain-basement junk that costs half as much (except for the thinkpad, which has been cut to the bone because the X1 is their ultraportable).

Gits. I work in the Lake district, and am much more fond of Trabant Afficionados than the kind of po-faced ninnies who go on holiday in the rain to complain about things.

Yes, and I also caught the part where you ridiculously and baselessly disparaged Bootcamp and I corrected you on it. Bootcamp is very obviously not actively nor inactively sabotaged at all. If it was, then that would only make other hardware that runs Windows look even worse than they already do.

The truth of the matter is Windows is a pile of shit and even with that issue, Apple runs it great with Bootcamp.

Maybe instead of implying it’s Apple fault (or hardware setup, etc), let’s look at the reality of the situation?

This was you, right?

where Windows is running on top of whatever Apple deemed ‘good enough’ for Bootcamp(which probably isn’t actively sabotaged; but I’d doubt that any heroic measures were taken).