Once again, London does not really welcome Trump

Emperor Deranged Donald Almighty represents the 40%, the Christian white nationalists who want Britain out of the EU, isolated and compliant to Donald’s take it or leave it trade deals.
How embarrassing to have the leader of the free world and the face of America taking time out to go after 2 people of color, Meghan Markle and Sadiq Khan. Does anyone think it has more to do with their skin color than anything else.
He ain’t right

You are disturbingly good at that. I don’t think I can trust you.

See - I told you they loved him in London. They actually cleared the center of town to make space for his head.

His word choices are weird, his stop-start-stop incomplete sentences are weird, and his obsessions and verbal crutches, his verbal tics, are weird.

How can he live with himself after debasing our language like that?

He probably doesn’t even realize he’s doing it.

I gave up long ago trying to understand whether he’s had a series of mini-strokes, or brain damage resulting from the long-term exposure to drugs and/or Standard American Diet, or dementia (maybe a dual diagnosis w narcissistic personality disorder), etc.

Is Donald Trump a throwback to ancient oratory — or an undisciplined rambler?

A single conversation could be all you need to spot a psychopath.

Reportedly, she gifted him with the book and a set of pens.

OMG! Is that a Joust game?! 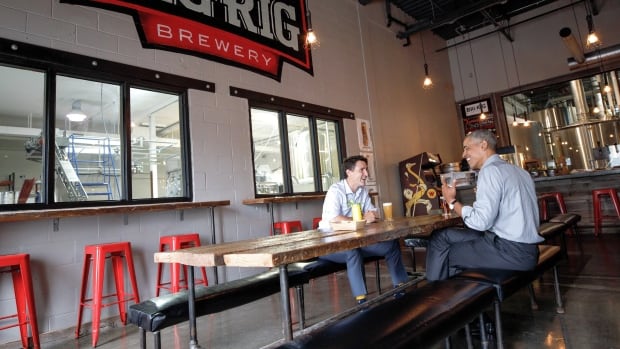 For Big Rig's Sophie Prescott, it was just a "casual hangout" at her bar — albeit one between a pair of high-profile customers.

COMPLETELY off topic: frozen french fries on the ship would have been heaven. We had some horrible extruded reconstituted mashed potatos dunked in an impending cooking oil fire.

I wonder if she highlighted any passages for him…

She did much better than that.

“Why would you give Donald Trump a book?”

“Newscasters have described it as a “first edition” of The Second World War, Winston S. Churchill’s history of the war, originally published in six volumes between 1948 and 1953, which won him a Nobel Prize in Literature. That would be a lovely gift for anyone but Donald Trump; a complete set of the U.K. first editions goes for a little over $2,000, and they’re gorgeous, fit for a president’s library. But that’s not exactly what the queen gave President Trump. Her gift for him was the first edition of a slightly different book: The Second World War One-Volume Edition , currently available in its 1959 U.K. first edition on AbeBooks.com for as little as $14.32. That’s right: she gave him the abridged version. (At least it wasn’t the “special abridged edition for young readers”)"

We commoners can only wish we could troll like the aristocracy.

The Uncommon Reader: A Novella|Paperback

From one of England's most celebrated writers, a funny and superbly observed novella about the Queen of England and the subversive power of readingWhen her corgis stray into a mobile library parked near Buckingham Palace, the Queen feels duty-bound...

Looks like the British police figured out their own welcome to POTUS.

@hugorifkind Allow me to lighten the mood. Police humour? https://t.co/O064wDAVe6

Actually, this doesn’t sound like Turmp, because while he uses a lot of parenthetical clauses, he doesn’t close them. He has noticed smart people doing it, but is too dumb to realise that the smart part is remembering what you were originally saying.

Smart people can hold more than one train of thought at a time; Turmp can hold less than one.