“Coverage of Mr. Trump may eclipse that of any single human being ever. The reasons have as much to do with him as the way social media amplifies every big story until it swallows the world. And as important as covering the president may be, I began to wonder if we were overdosing on Trump news, to the exclusion of everything else.” 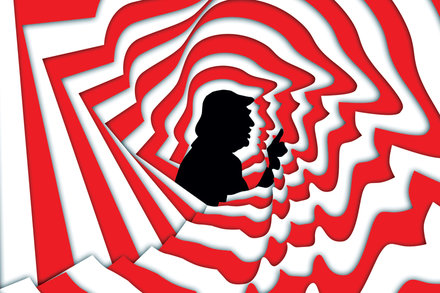 I Ignored Trump News for a Week. Here’s What I Learned.

Coverage of President Trump may eclipse that of any single human being ever. I discovered several truths about our digital media ecosystem when I tuned it out.

Yes, and I truly resent it. There are other things going on in the world that I should know about, but fucking Trump gets in everything.

This is why I hope he impeached for something really boring and non-sensational, flees the country to avoid a fraud conviction, and spends the rest of his life shuttling between overseas resorts and no one cares enough to report on him.

There’s too much Trump-related news to follow it all. I’m pretty sick of the portion of it that I do read. I feel like I don’t want to let him get away with sneaking something in on the sly and I don’t want to stop being outraged, but at the same time, I want some peace, and I want that monster out of my head.

As long as this monstrosity is allowed to walk the Earth unchallenged, news coverage will ensue.

Something’s definitely got to give. All this attention, all this focus on one orange man.

A mobbed-up, narcissistic businessman turned politician, yawn yawn… we’ve had worse presidents. He’s really not as exceptional as the media want you to think he is; they are just trying to sell your eyeballs and clicks to advertisers.

But I have to say it’s nice to see America wake back up and start doing things to try to reform our unjust, warmongering, racist and sexist government and culture again. Sure, the negative, hate-filled screaming and ranting of the anti-Trumpeters is tediously annoying, but there are also a great many people who have been inspired to get up off their butts and start taking positive steps.

If it took a horrorshow like Trump vs Clinton to make that happen, then perhaps it was worth it; sometimes things have to get worse before they can get better.

How 'bout dat. Secret Service got an account here. Who knew?!

waves at the spooks

As a foreigner, I’m already an enemy anyway.