When we moved to TX there was a Shakey’s in the Forum 303 Mall, but it didn’t seem quite the same as in CA, and anyway was blown out of the water by Crystal’s:

Maybe it’s just where I live, but Chuck E.'s these days is pretty half-assed. Bring back the doiby hat and Joisey accent, for starters. Along the same lines of Chuck E./Showbiz was Crystal Pizza, but it had no animatronics, and the interior was (I guess) like a Victorian mansion. (Or sporting house.) At some point they switched to a buffet, but I hadn’t been there in years before that happened. Apparently it finally closed its doors about a year ago. (They also owned Casa Bonita, similar co…

That puts me in mind of a very good “themed” restaurant in Wichita at the time, Dr. Redbird’s Medicinal Inn. It had less of a barber music atmosphere, and something more like the Depression-era motif of Paper Moon. Pretty simple fare, but it was good and they didn’t overdo it with the tchotchkes as many restaurants do these days. 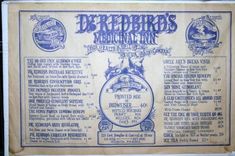 7 Things From The Past We All Wish Would Come Back To Kansas | Only In Your...

We did, in Southern California in the 80s. We had a couple little league pizza parties there, I can only remember being at Shakey’s when it was overflowing with children. I recall being indifferent to the pizza itself, but preferred Round Table because they had a couple of video game machines in the lobby.

I grew up in Dubuque, where Happy Joe’s was the place to go with kids. We loved the glass window to watch pizza making. The birthday sundaes. The house specialty, a pizza with “Canadian bacon” and sauerkraut.

I remember Shakey’s as well, but barely. My parents always took us to Happy Joe’s.

Now, decades later and after emigrating to Europe, I have a craving for a taco pizza and root beer.