She was called “Una” in the DISCO series 2 finale

So her name really is “One.” That settles that.

Horses are not typically known to explode and release a flood of delta radiation.

That’s what they want you to think. Once you’ve relaxed your guard, BOOM!

Anson Mount has been amazing in this role. I have little doubt that the Discovery portrayal of this time period, coupled with the performance of these three actors, spawned this spinoff as soon as Discovery went to the future.

This is the closest we will get to an Original series reboot, since in theory it will end right about the time the enterprise is passed to Kirk. I bet this will be a hoot!

That’s what they want you to think.

did Number One ever get a proper name?

Yes, she has a name now… lt. commander Una Chin-Riley.

More on the original character and on the current character… 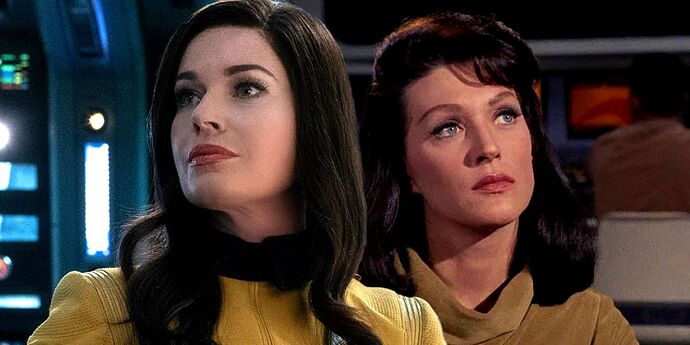 Gene Roddenberry would be surprised that Number One has a real name.

let’s just poke this corpse of a franchise with a stick a few more times.

Though if I was Pike - after that reveal of his future in the Klingon monastery? I would never step foot on a starship again.

Wasn’t that his whole deal, that he knows what’s coming, but is forging ahead anyways…

Wasn’t that his whole deal, that he knows what’s coming, but is forging ahead anyways…

Another Star Trek? There’s only one.

And speaking of the original original what about Yeoman Colt?

Sadly there’s this. She died a couple weeks ago and was the last living actor from the pilot. 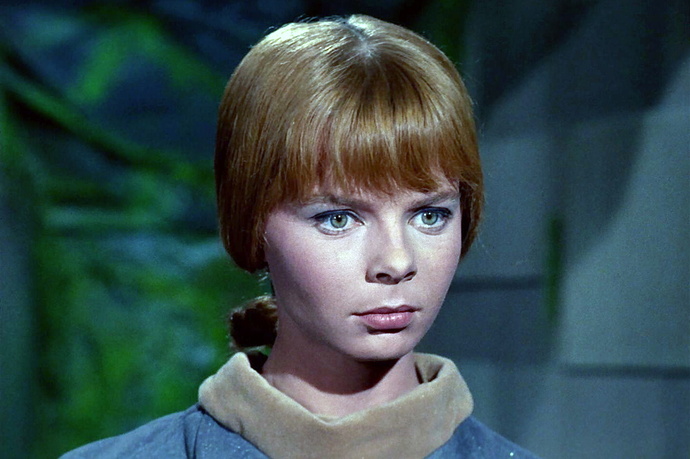 Laurel Goodwin, Elvis co-star and Yeoman Colt from “Star Trek”, died February 25 in Cathedral City, California at the age of 79.

Another Star Trek? There’s only one.

corpse of a franchise

Considering the Trek universe now has stories in the past, present and future regardless of what timeperiod you consider “current”, and they are fresh, new tales, not rehashings or reboots, I would be hard-pressed to think of a less “corpse-like” franchise at the moment.

Perhaps what you meant to say was “This new Trek is too unlike the Trek I grew up with, therefore I must throw shade at anyone who enjoys it to preserve my memories and virtuous remembrance of this bygone era?”

and they are fresh, new tales, not rehashings or reboots, I would be hard-pressed to think of a less “corpse-like” franchise at the moment.

I don’t understand how they can be creating shows in the original (“prime”) continuity at all. “Yesterday’s Enterprise”* established that changing the past overwrites the previous timeline with the new one — rather than creating parallel timelines — so the “Kelvin” timeline created by the events of the 2009 movie is now the only “real” timeline, for all events from Kirk’s birth onwards.

* ETA: as did “The City on the Edge of Forever” before it.

No. It split the timelines. While changes were made to the prime timeline, it still exists…

Yep- he’s much braver than I am.

I kind of liked her just being No. 1, very mysterious.

I kind of liked her just being No. 1, very mysterious.

Yeah, true… but I assume that if she’d stuck around as a character after the pilot we would have gotten more back story?

Yes - we’d all want a peak inside that exterior.

Jason might be referring to the JJ Abrams lens-flare tainted Trek universe.

I think we still need to have room for criticism that doesnt just reflect nostalgia.

I will readily admit that TNG (which is my favourite nostalgic trek) had some absolute stinkers of episodes and even whole seasons. But I also lament the fact that some new trek can feel like it isn’t even inspired by the old shows.

That being said, I am personally also not a big fan of Discovery. But I have no critiques of the cast or their characters, and most episodes are quite good.

I don’t think they are doing themselves a service with making the stakes of every conflict soo large. When each season is focused on a potentially universe ending scenario it is harder to get invested and makes the middle of the season feel stretched out. And it is almost impossible to please everyone with a suprise conclusion to a season spanning mystery.

That being said, Picard season 2 has my attention. Lower Decks is surprisingly excellent. Prodigy is enjoyable so far.

I’m optomistic Strange New Worlds can bring more small stories to the screen. Maybe Im old fashioned but I enjoy being able to watch a single episode on its own.

Which makes it worse.

I’m happy that they’re going to cover the Pike years of the Enterprise, but I do think they need to consider a hard reboot of the franchise eventually. It really needs to be re-examined without the legacy of the previous work to lean on or reference. I still like the proposal by J Michael Straczynski to do a reboot that resets one element of the franchise: the prime directive. In this case, the proposal was that the prime directive would’ve instead been a general order to find the origin of all humanoid life in the galaxy even if it disrupts normal operations. I think such a change would open some new doors instead of sitting with the same logic of the franchise’s past.