Peeling away layers of UI makeup on Windows 11

Originally published at: Peeling away layers of UI makeup on Windows 11 | Boing Boing

consider the value of backwards compatibility for what remains the world’s most used consumer and business OS.

Much as I dislike Windows, I have to respect the level of backward compatibility it has maintained.

At my last job, we were talking amongst the younger engineering team about some AI concepts. About 20 years ago, I had written some little demo apps for some of the algorithms they were interested in. Things like neural networks, A* navigation, and using a genetic algorithm to solve the travelling salesman problem. They were all written in C++ and for UI used… wait for it…. MFC.

I thought maybe I could get them running in an Oracle Virtual Box with a old WinXP install on it or something to show the team, but on a lark I tried running them as-is on Windows 10. It… just worked. On first launch it went through about five minutes of auto-downloading and auto-configuring madness, and then the apps launched. They almost completely worked. There were a few little quirks in the mouse tracking and focus behaviour, but the apps ran and did what we needed to show the algorithms to the team. I dunno what all Windows was downloading, installing, and configuring to make it happen, but to run a 20 year old application built with a long-abandoned UI architecture on the latest OS with no changes is pretty impressive. 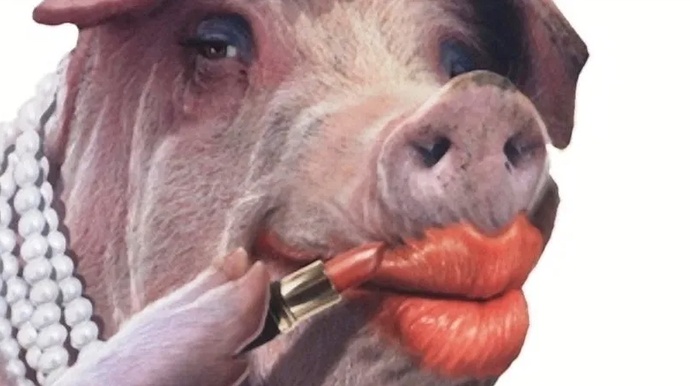 on a lark I tried running them as-is on Windows 10. It… just worked.

i wonder if it must have been virtualizing them automatically. the security implications of downloading and running the system level dlls needed from that era seems cool, and also pretty scary otherwise.

No, it was indeed installing a big pile of 20yo old DLLs.

Windows is a dumpster fire security-wise, and stuff like this is why. But it’s a very very backward-compatible dumpster fire.

Much as I dislike Windows, I have to respect the level of backward compatibility it has maintained.

I much prefer MacOS (although Apple are doing their best to change my mind about that). But there are a number of relatively-recent apps I’d like to use that will no longer run on newer versions of OS X, whereas Windows is just “Last updated in 1996? No problemo! Fire it up and let’s go!”

Apple’s superpower is changing entire processor architectures and having apps from the last one run just fine on the new one (at least until the next release of the OS drops, at which point all bets are off); Microsoft’s superpower is that when someone finally makes a self-aware robot running Windows 25, you’ll be able to play Win95 Minesweeper on it and hack its brain directly by opening a DOS prompt.

Most of the files in the installed .exe folder are dated 14/2/2001, but something weird seems to have happened to the main .exe and some dlls… 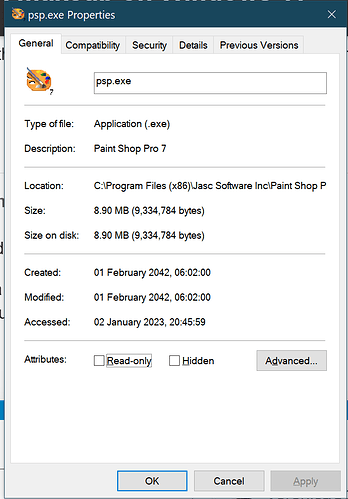 Microsoft’s superpower is that when someone finally makes a self-aware robot running Windows 25, you’ll be able to play Win95 Minesweeper on it and hack its brain directly by opening a DOS prompt.

Yeah, but it’ll be sending telemetry back to Redmond the entire time, and every 30 +[random] minutes there’s be an ad for Office 9000 (or whatever O365 mutates into) that you’ve already subscribed to. Or it’ll BSOD and brick itself because one of the drivers was signed with an expired certificate that the developers forgot to renew and somehow snuck into the update from last night. Or the self-aware robot will look at it’s own codebase and commit seppeku within 5 minutes of it coming online.

(No, I’m really not looking forward to replacing the copy of windows 7 that I have on my main desktop with something that spies on me and has forced updates that I can’t turn off unless I pirate a copy of the enterprise edition or the server edition of the same codebase…) 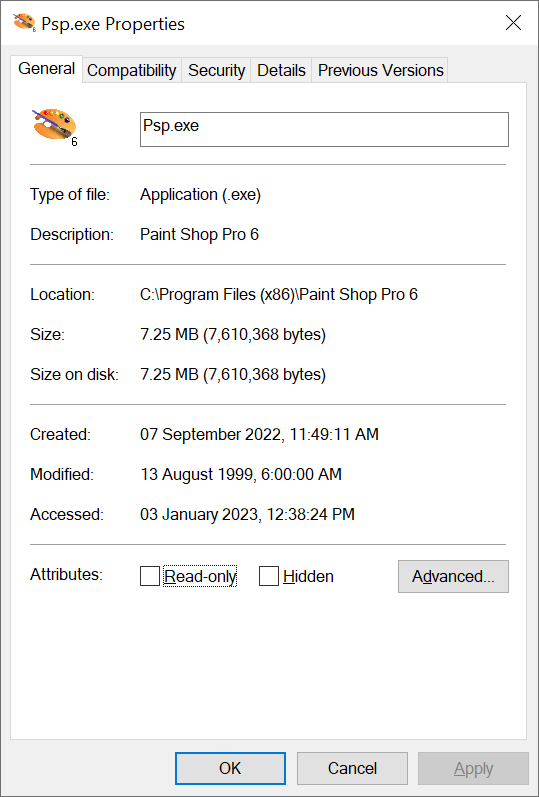 Same here, it works great for 99% of the basic stuff i need doing

Let’s see what the oldest Windows app is that BBers are still running… oldest .exe I can find isn’t GUI but still runs fine, from a set of MPEG2 processing utilities: 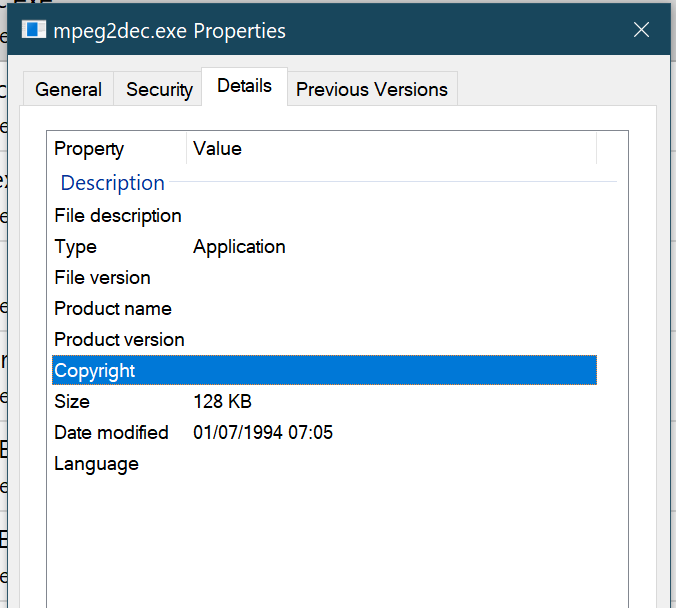 Yeah, but it’ll be sending telemetry back to Redmond the entire time, [snip] copy of windows 7 that I have on my main desktop

Did you know that the telemetry started in XP and is very much present in Win 7?

I’m still using Access 2003 for my invoicing. I created the database very specific to the service I sell back in the 90s, it makes filling out an invoice that can consist of 30 or more individual services much easier. Access 2003 was the last version I paid for.

It has some Active X controls that don’t carry over to the latest Access versions. I’m too lazy to redo it plus I can’t remember how. The database will run on Windows 10 without the Active X stuff but I keep planning to retire before I have to update.

I have Corel Paintshop 5 {1998ish) installed because a couple years ago I found some old projects I wanted to play with.

My main office computer is Windows 7.

Did you know that the telemetry started in XP and is very much present in Win 7?

… not if you’ve either disallowed that specific update(s) to install, or have neutered it. :wry grin: XP was straight forward to neuter; Windows 7 was either head off update KB3035583 by blacklisting it, or doing some fairly arcane bullshit to rip it out at the roots after it was installed. (on top of killing off the CEIP checkboxes/services)

Unless some people more clever than I have figured out how to entirely remove it from windows 10, the closest I can get is the “security only” reporting in windows 10 enterprise, which requires some shenanigans to get a hold of.

I’m still digging into what my options are as I get that machine rebuilt and a new OS installed on it.

While I’m not hardcore paranoid about what the OS is sending back to the mothership, I do expect it to not shove ads in my face, especially if I’ve paid for the OS, and I want to retain reasonable control over when and how it updates- a stock out of the box install of 10 Home does all of it, even the paid version.

(If I was hardcore paranoid about it, I would never have been using any internet connected devices at all.)