Pentagon's UFO report: no evidence of extraterrestrials, but can't eliminate the possibility either

Originally published at: Pentagon's UFO report: no evidence of extraterrestrials, but can't eliminate the possibility either | Boing Boing 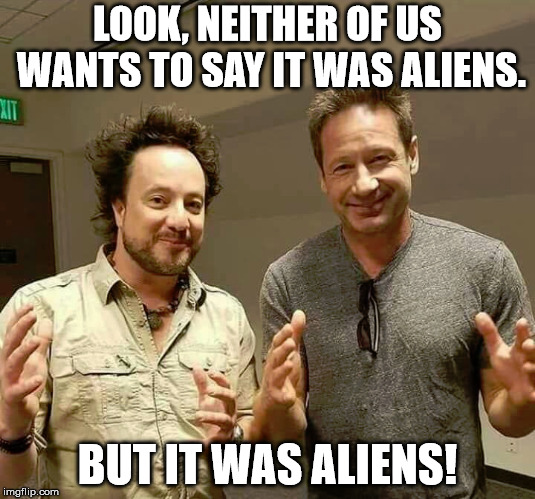 Wow, that is some SHOCKINGLY bad journalism on the part of the New York Times. But I supposed it’s to be expected, given its past reporting on the subject by Leslie Kean, et al.

What would even quality as evidence that it was extraterrestrials in this case? They’ve just come full circle to unidentified flying objects.

Am I the only one who had listened to all of these reports and thought that since all evidence for these things is visual evidence, they are probably a visual phenomenon? Like, when they describe the incredible properties of these things (acceleration, etc) it feels like a spotlight on a cloud could do all those things.

And it evades sonar!

ETA: I’m not saying these things could be spotlights on clouds, but I have to wonder if people aren’t trying to find a rainbow here while not understanding that a rainbow isn’t a thing thing.

I seem to recall some verbal reports by pilots that were scrambled to intercept things that showed up on radar.

I’ve also heard that many of these infrared signatures are symptoms of the hardware used to capture the video.
Maybe they are:
Explained: The Gimbal UFO’s Glow/Aura is Just Image Sharpening
Maybe they aren’t:
“Gimbal” UFO ATFLIR video rotation explained by a Depot Level FLIR Technician - YouTube

This Sims DLC has taken a really weird turn.

“No evidence but can’t eliminate the possibility” feels like an ontological category that must have come up before. I wonder if philosophers and scientists have ever said anything about it.

That’s been one of the suggestions all along. And I’ve seen a bunch of these public responses from people involved in building and calibrating these things saying they’re common, known artifacts in the equipment.

I haven’t seen anything about this current investigation showing they considered or looked at the possibility.

So sure the military should be concerned these might be devices and some sort of threat.

But they should also be concerned about bugs and calibration issues in their own equipment.

Yet more TLA*s to the rescue!

“No evidence but can’t eliminate the possibility”

…that it’s Santa and his reindeer

This guy might be a FLIR technician, but wow does he miss the mark. His own explanation of the gimbal mechanism shows that there are two independent axes of movement, yet he only considers one when he talks about the mirror assembly being able to rotate the whole scene, glare included. Not to mention that he doesn’t account for the fact that we see other artifacts of the rotation at the precise moments that the glare “rotates,” indicating a strong correlation between the “rotation” of the glare and the rotation of the mechanism. (He also states that he’s a “good friend” of Jeremy Corbell - that in itself should be enough to raise red flags.)

Maybe they are:
Explained: The Gimbal UFO’s Glow/Aura is Just Image Sharpening

Mick West’s analyses, on the other hand, are pretty much spot-on, and there’s a lot more good stuff in his YouTube channel and on his forum site, metabunk.org. Highly recommended for anyone interested in this stuff.

Rainbows don’t show up on radar, but these things do.

One possible explanation — that the phenomena could be weather balloons or other research balloons — does not hold up in all cases, the officials said, because of changes in wind speed at the times of some of the interactions

Because some cases seem like they can’t be balloons none of them are. Therefore they are all aliens.

There’s also no evidence these things caught on (infrared, radar) video are any kind of technology… Mick West has debunked them all pretty well. The idea that they’re Chinese, Russian, or what have you just seems like a feint to justify military spending.

That certainly settles the question of whether they are literally, precisely rainbows.

Most of the movies I’ve seen look like artifacts of the camera or sensing system to me. (The triangle bokeh, the lensflare like rotating in the ‘gimbal’ video. The ‘fast’ video is imho also convincingly debunked, where object is slow, but because of the speed of the plane it seems fast against the background)

What’s interesting to me is this:
Most of these have quite trivial explanations. But the pentagon still calls the phenomena ‘unidentified’. I can’t really imagine that there’s no-one inside the military competent enough to analyse these videos. So either they’re just not interested (somewhat understandable) or they have some other reason to let people run with the ufo theories.