Originally published at: Performance artist with Pfizer tattoo on head ate a live bat outside of European Parliament as an act of protest | Boing Boing

They should just give it to the global south… Just… give it to them. It’s not rocket science. If the whole world doesn’t get the vaccine, then we’ll continue to be fucked. We have to start taking globalization seriously and deal with the consequences of it logically and with compassion. If we don’t, we’re going to continue on with the destruction of our planet.

Why does he hate bats?! WTF. 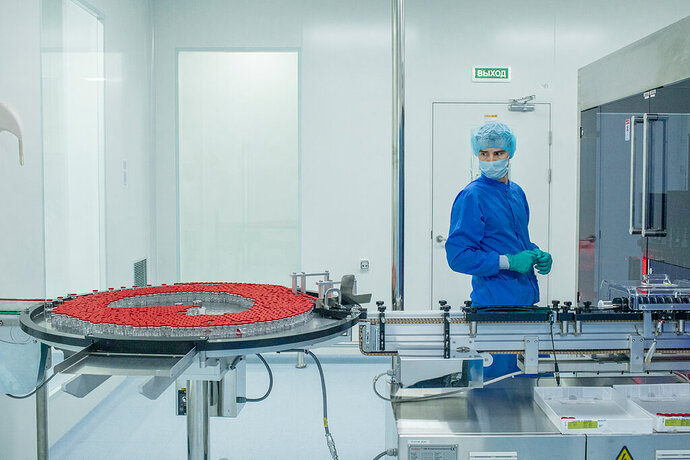 Russia Is Offering to Export Hundreds of Millions of Vaccine Doses, but Can...

The Kremlin has scored propaganda points and bolstered several longstanding foreign policy goals by offering its Sputnik V vaccine around the world. But it has limited production capacity.

That’s the approach Russia and China seem to be taking with their vaccines. It’s not entirely altruistic, but if the jabs work then more power to them. As you imply, viruses don’t respect borders, and neither will a rise in global temperature. If humanity is going to embrace globalisation the benefits shouldn’t just accrue to a relative handful of plutocrats and corporate entities.

It’s not entirely altruistic, but if the jabs work then more power to them.

No, of course, not, but it’s not just about hoodwinking the global south either. It makes practical business sense, for one, while also showing that their form of power is softer and more humane than the west (there are plenty of critiques of that of course).

If humanity is going to embrace globalisation the benefits shouldn’t just accrue to a relative handful of plutocrats and corporate entities.

Seriously, what does any of this have to do with bats?!

There is still debate, but it’s widely believed that the disease was a zoonotic that came from bats. Whether that’s the case, IDK, but that’s the going wisdom.

Still not fair to the bat, tho.

It makes practical business sense, for one, while also showing that their form of power is softer and more humane than the west (there are plenty of critiques of that of course).

Less militaristic beyond their immediate frontiers, at least. Especially for China. Giving away their vaccine to the developing world is right in line with the Belt-and-Road infrastructure scheme. There’s a price to be paid by the recipients eventually, of course, but it’s not like China’s foreign policy is lumbering along on the basis of a grotesquely bloated military-industrial complex as a hard-power cudgel like some superpowers I could mention.

And yes, to be clear though most of us know it already, that doesn’t make China anything close to a paragon of virtue. It’s just a lot smarter about how it’s decided to project its global power.

Still not fair to the bat, tho.

It really was a dick move on the part of this “artist”.

when we were in botswana for a daytrip in 2019 there were easily a dozen projects going on both in urban and rural areas that were being funded anywhere from 25% to 100% by the chinese government. we saw numerous chinese advisors around as well.

Yep; hearts and minds and practical infrastructure…China will be a dick-swinging world power in our lifetime.

All this reminds me of is Edison trying to prove AC power was “dangerous” by electrocuting an elephant. People will just remember this guy as the asshole who ate the poor, defenseless bat.

Ever tried to eat a live elephant?

the asshole who ate the poor, defenseless bat

most bats fly around eating bugs all day of course

I am sure it is psychologically comforting for people who enjoy doing horrible things to believe they do it for the greater good. I am sure they go looking for good, comforting excuses to do the things they do. He probably feels much better about the awfulness he’s drawn to when he covers it in a banner of social justice.

It doesn’t change what he is, though. Sexual play with roadkill and torturing small animals aren’t warning signs of being an “artist”.