*With the important clarification that I don’t think the veganism or animal rights as a CAUSE are in any way comparable to homophobia.

Maybe they should open a cannibal restaurant there that only has homophobes on the menu.

Maybe they should open a cannibal restaurant there that only has homophobes on the menu.

Didn’t he have a rather dull childhood? It’s not like you’re in Gein’s ear gallery or something. Idiotic.

Such a sad state of affairs, this is

I once thought that, But then I heard of the games PETA was playing with a Mike Doughney’s parody site, the original PETA.ORG, currently mirrored at: http://www.mtd.com/tasty/

At the time, they were PeopleForTheEthicalTreatmentofAnimals.org, and the parody, “People Eating Tasty Animals”, was peta.org. Then PETA changed their name/logo, and initiated a domain-name theft under claim of trademark and copyright.

They were bullies then, and remain bullies now. . .

And then a few years later, PETA turned around and registered domain names like RinglingBrothers.com and put up anti-Ringling info…PETA has never had much of a problem with hypocrisy.

They did eventually hand over RinglingBrothers.com to the circus after Ringling filed a lawsuit.

I’ll have the fava beans.*

Oh childhood home? I’m not sure I’d want to live somewhere where there’s any chance I’ll find a body in the backyard. But if the fact that he once touched it drives the price down- it sure beats renting.

I think in My Friend Dahmer it says he kept his first victim’s body in that house.

Dahmer committed his first murder in the summer of 1978, at the age of 18, just three weeks after his graduation. At the time, he was living alone in the family home: due to his parents’ recent divorce, Dahmer’s father temporarily lived in a nearby motel and his mother had relocated to Chippewa Falls, Wisconsin with his younger brother. On June 18, Dahmer picked up an 18-year-old hitchhiker named Steven Mark Hicks. Dahmer lured the youth to his house on the pretext of the pair drinking alcohol together. Hicks, who had been hitchhiking to a rock concert in Lockwood Corners, agreed to accompany Dahmer to his house. According to Dahmer, after several hours’ drinking and listening to music, Hicks informed Dahmer he “wanted to leave and [I] didn’t want him to.” In response, Dahmer bludgeoned the youth with a 10 lb. dumbbell. Dahmer later stated he struck the youth twice from behind with the dumbbell as he (Hicks) sat upon a chair. When Hicks fell unconscious, Dahmer strangled the youth to death with the bar of the dumbbell, then stripped the clothes from Hicks’s body before masturbating as he stood above the corpse.

The following day, Dahmer dissected Hicks’s body in his crawl space; he later buried the remains in a shallow grave in his backyard before, several weeks later, unearthing the remains and paring the flesh from the bones. The flesh he dissolved in acid before flushing the solution down the toilet; the bones he crushed with a sledgehammer.

My Friend Dahmer is amazing and it is on Comixology. Highly recommended. 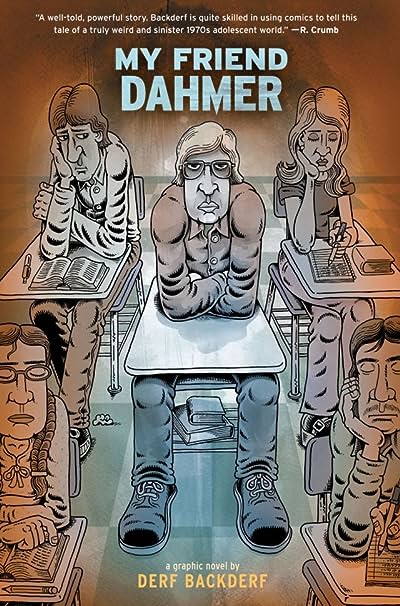 My Friend Dahmer - Comics by comiXology

270 pages! You only think you know this story. In 1991, Jeffrey Dahmer-- the most notorious serial killer since Jack the Ripper-- seared himself into the American consciousness. To the public, Dahmer was a monster who committed unthinkable...

Never loathed an organization with a reasonable position more than I loathe PETA. Such an annoying bunch of dipshits.

Came here to say this. Especially knowing what Dahmer’s life was like inside that house, it makes this move by PETA especially dickish.

It’s not hypocrisy when when you have God on your side.

I love this book.

Oh PETA, you so crazay.

I recall reading some story years ago about some PETA-run animal shelters, where they would take in “perfectly adoptable” animals and put them down within a week or two. I never liked them as an organization, period, but I especially disliked them after that.

I thought all of the PETA shelters were no-kill shelters? Of course that just means they turn away any unadoptable animals so they can be killed by the regular shelter.

When the supply of housepets exceeds the available homes, there isn’t much you can do. You can combat the problem at the head with aggressive spay and neuter campaigns, but it doesn’t take many fertile cats to create a huge quantity of kittens. Shelter capacity will always be limited, so your options are to either let the excess animals roam the streets or put them down. Neither option is great, but most people (outside of PeTA) agree that feral animals are more of a problem than euthanasia.

Here’s PETA’s statement on the matter; it’s actually one of the saner statements I’ve read from them. Here’s a Time article on it, which notes that one of the groups protesting PETA’s stance is a restaurant industry group. I still think that PETA are attention-mongering jerks, generally, but they have a point WRT no-kill shelters.