Couldn’t have said it better.

There will be much talk of his “serious” work and probably his hell-raising. But to see him in his true element, track down a copy of “Jeffrey Bernard Is Unwell”. There’s a DVD of his theatrical performance as a dissolute newspaper columnist locked in a pub overnight. It’s comedy gold and is my favourite performance by Peter O’Toole.

This takes me back to a truly weird moment when I was a teenager. I lived in London and was hanging out in a pub in Hampstead. There were a bunch of us from my school and one or two girls they knew. When the pub closed we all went over the road to one of the girls houses. It was an amazing place full of artifacts, a crystal skull, a 300 year old program from a Shakespeare production. I turned to the girl and said “what does your dad do?” "she said “He’s Peter O’Toole”. “good job” I said.

Yeah, sad day, happy thoughts at his career (and how much he made me laugh!)

I find it hard to choose favorites, but he was probably my favorite actor when it comes down to it. Simply astounding performances, no matter how serious or silly the film.

It is a great loss, but he had already almost completely bowed out of acting for years now. He left behind an incredible body of work and felt no need to keep doing it once he felt he no longer had it in him. And good for him… if any actor deserved to feel satisfied with his career, as so few do, it was him.

Not uncoincidentally, Lawrence of Arabia is perhaps my favorite film… I first saw it as a teenager and since then I tend to end up watching it maybe once a year or so, sometimes more if I’m introducing it to someone else. Absolutely everything that he was in is worth watching, though, even if overall the movie isn’t very good (like Casino Royale). You leave any film he’s in feeling satisfied.

Simply astounding performances, no matter how serious or silly the film.

One of my favorites was <a href=http://www.imdb.com/title/tt0489327/?ref_=nm_flmg_act_14>Venus for any number of reasons. IIRC, he did an interview about that same movie on NPR during which he mentioned that he’d committed Shakespeare’s Sonnets to memory. The interview and the movie are both wonderful and worth checking out.

O’Toole was a dead-set classic; an archetype unto his own.

Also my mum’s favourite, ever.

I will always remember him as one of his generation’s best actors. Few others moved me with a performance quite like Peter. I’d also put him in the Top 5 for most interesting actors to interview. I once sat down in a coffee shop in Oregon and picked up a magazine nearby that contained an interview with Peter in his home. I don’t recall anything at all going on around me for the next hour or so. I don’t even remember what town we were in. I put down the magazine at the end and said to my husband, who had been left to entertain himself, ‘That was simply one of the best interviews with an actor I’ve ever read.’ It helped that the interviewer was someone Peter knew, and was close to Peter’s age; they had history between them. Mr. O’Toole had a long and remarkable life.

I most recently saw him in a magical little film titled ‘Dean Spanley’. I highly recommend this film; I don’t use the word ‘magical’ in reference to a film very often. It wasn’t magical because of Peter’s performance, although he was in a key role and very good. It was magical because Sam Neill plays a character who when he imbibes a particular rare liquor, recalls memories from a previous incarnation of when he was dog, and I totally believed him. I had been standing in the living room doing the ironing while watching the film stream on Netflix, and about halfway through the film was so caught up in the story, I had to sit down and give it my full attention. That is almost always the case in films that contain a performance with O’Toole. Magic. 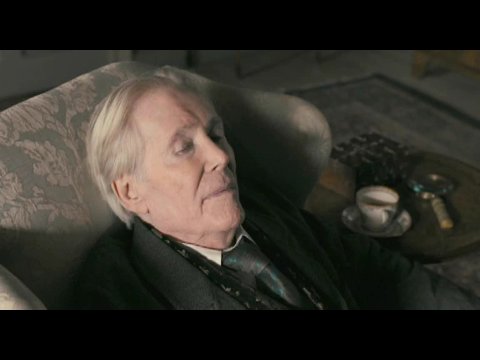 Set in Edwardian England, Fisk Senior has little time or affection for his son, but when the pair visit an eccentric Indian, they start a strange journey that eventually allows the old man to find his heart.

Even though I only saw a few of his movies–the thing that stands out most clearly in my mind is the TV miniseries Masada–O’Toole was always so compelling and fascinating. I would swear I saw him interviewed on Later With Bob Costas, but I must be thinking about some other talk show where he talked at length about his career and what an exciting time the sixties were. He told the interviewer that for much of that decade he would only sleep in short fits, sometimes in the middle of conversations, because there was so much going on and he didn’t want to miss anything.

Sadly I was just thinking earlier this month that I should take advantage of the holiday to finally see Laurence of Arabia. I’ll take this as a grim reminder that I should have plugged that hole in my education a long time ago.

I guess that’s this one?